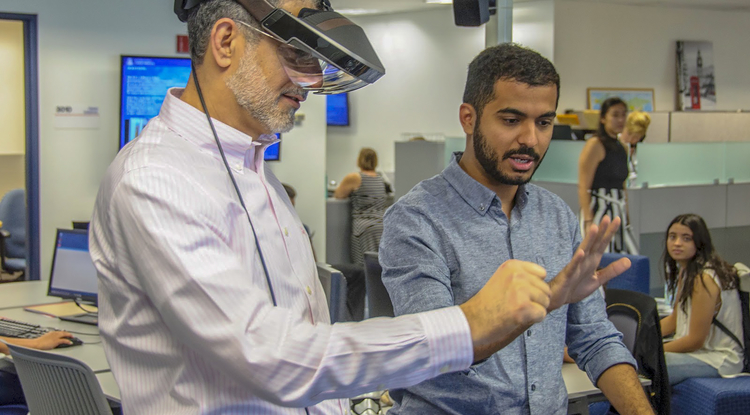 UA students employed at Tech.Global earn more than just a paycheck. "There's nothing like it on campus," says Hazza Alkaabi, a computer science major who hopes to work in the space sector.
Stacy Pigott
,
University Communications
June 27, 2018
Resources for the Media 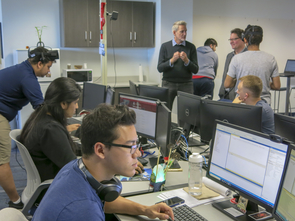 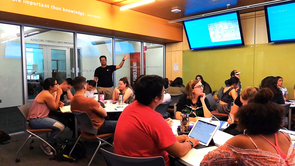 Robert Johnson, a current Tech.Global student worker and Africana studies major in the College of Humanities, hones his presentation skills while giving a tech demonstration to a UA class. Tech.Global students also develop communication and relationship-building skills as they interact with faculty and staff during project meetings. 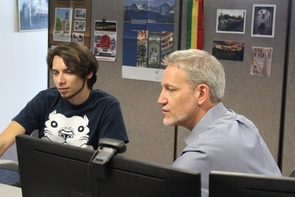 Ash Black (right) helps Tech.Global developer Alan Salguero with some coding. Salguero is working at Tech.Global this summer while visiting from the Instituto Tecnológico de Sonora in Mexico.

Ash Black was watching the 2014 World Cup when a commercial caught his eye and his imagination. Four years and a lot of hard work later, his vision has become a reality in Tech.Global, one of the most unique student worker programs at the University of Arizona.

"I saw an ad from Apple, and it struck me how the technology companies were falling over themselves to show young people engaged, filled with energy and using their devices," Black, the program's executive director, recalls of the watershed moment.

"It just clicked for me, like in a flash, that we were sitting in the perfect position to give them what they need, which is the experience of our students."

Tech.Global's results have been impressive. The first five student workers to graduate all were quickly employed. One is a software engineer at Microsoft, two are front-end web developers for the geographic information system powerhouse Esri, one was recruited by the Italian firm Tech Gap Italia and one is working as a database specialist at the UA.

The students' success is a byproduct of Black's vision to create a 100% Engagement experience while expanding the UA's research capacity by supporting researchers' technological needs. Tech.Global student workers code in a full stack environment — meaning they use front-end and back-end software platforms — while honing market-ready skills such as MVC, SQL, and virtual and augmented reality in a highly collaborative work environment.

"I wanted to work here because there's nothing like it on campus. I never thought there would be something like this at a university," said Hazza Alkaabi, a computer science major who will graduate in December. "It's a break from the theoretical and the theory that I have in my computer science courses. I'm able to apply some of the skills that I learned in school and the skills I learned in my personal time. I work as much as possible between my classes because I enjoy it so much here."

Students — some majoring in computer science, others in electrical engineering or management information systems — apply to work at Tech.Global, where each student seat is funded for 1,024 hours. UA faculty or departments can sponsor a Tech.Global coder and, in doing so, immediately gain the capabilities of the entire team in support of their projects.

Alkaabi's first project at Tech.Global was to work on Gear Tracker, a web-based application UA Global now uses to track equipment. Sophomore Miranda Hampton, one of the team's newest members, is getting her feet wet developing an application to track people by their areas of expertise and connect those with similar proficiencies.

Outside of UA Global, Tech.Global has worked on projects for individuals in the College of Humanities, College of Agriculture and Life Sciences and Tech Launch Arizona.

"I saw in the job description that Tech.Global works with projects with virtual reality and augmented reality, so that's what really drew me into it," said Hampton, who is majoring in electrical and computer engineering with minors in math and computer science. "I didn't really have much experience in coding, so I was really intimidated by everyone here because they all knew so much more than me. I really didn't expect to learn as much as I have. I know that I've learned a lot, because I've helped members of my team."

Teamwork is a huge part of the Tech.Global model. The desks are configured into a seating arrangement that allows students to easily work separately or together. Each day, Black pairs students based on the students' abilities and the tasks that need to be accomplished that day. A student may learn SQL bulk insert commands one week and teach that skill to a co-worker the next week.

"The first 200-400 hours are usually burned with a lot of learning curve. They sort of figure out what they're good at and what they're not good at through that," Black said. "Across the board, between 400 and 600 hours, they really start to move more swiftly and they begin to put more energy into the team than they take out of it. After that, it's just this incredible acceleration."

For Alkaabi, that acceleration has led to virtual-reality and augmented-reality projects that Black hopes can someday be used to help professors teach students at the UA. Alkaabi will benefit from the knowledge he has gained, as well, as he hopes to work in the space sector when he returns to his native United Arab Emirates.

"I have a belief that virtual reality and augmented reality, especially VR, could help people get more excited about these big dreams and faraway places," Alkaabi said. "I want to use that to help get people excited about space."

Black's dreams for Tech.Global are on a similarly large scale. Because the program is based in UA Global, Black hopes that one day all Tech.Global students will participate in Study Abroad programs such as the one Taite Nazifi just completed in Costa Rica.

"I often say that it's Tech.Global. 'Tech' is tech, and the 'Global' is intercultural competency experience," Black said. "I see the microcampus as a very natural extension of this. My dream is to have a distributed network of coders all around the world brought together by their common geekdom, speaking Javascript together, because I believe in that."

Black also believes in the potential of UA students.

"I have learned in two years to lean heavily on the potential and capability of our undergraduate population," he said. "I really believe in their talent. I trust in it. It is awesome the amount of creativity, ingenuity and heart they have. I think if we suit them up and give them a place to work, they can move mountains. They can make a tremendous amount of change."