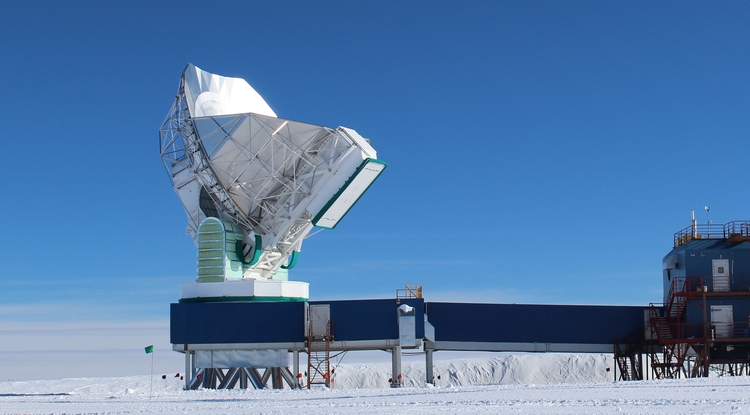 A team led by the UA has added Antarctica's largest astronomical telescope to the Event Horizon Telescope — a virtual telescope as big as planet Earth — bringing the international EHT collaboration closer to taking detailed images of the very edge, or "event horizon," of the supermassive black hole at the center of the Milky Way galaxy.
Daniel Stolte
,
University Relations – Communications
April 21, 2015
Resources for the Media 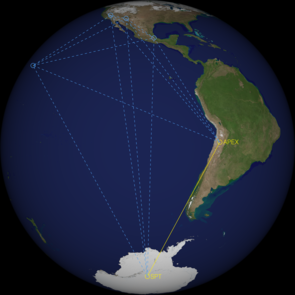 The South Pole Telescope and the Atacama Pathfinder Experiment joined together in a “Very Long Baseline Interferometry” experiment for the first time in January. The two telescopes simultaneously observed two sources — the black hole at the center of the Milky Way galaxy, Sagittarius A*, and the black hole at the center of the distant galaxy Centaurus A — and combined their signals to synthesize a telescope 5,000 miles across. (Image: Dan Marrone/UA)
The Atacama Pathfinder Experiment telescope sits atop the plateau of Chajnantor in the Chilean Andes, more than 16,000 feet high. The plane of our galaxy — the Milky Way — can be seen in the sky looking like a band of faint, glowing clouds. To the left of APEX is the central region of the Milky Way, where a supermassive black hole lurks at the core of our galaxy. (Photo: ESO/B. Tafreshi/TWAN/twanight.org)

Astronomers building an Earth-size virtual telescope capable of photographing the event horizon of the black hole at the center of our Milky Way have extended their instrument to the bottom of the Earth — the South Pole — thanks to recent efforts by a team led by Dan Marrone of the University of Arizona.

Marrone, an assistant professor in the UA's Department of Astronomy and Steward Observatory, and several colleagues flew to the National Science Foundation’s Amundsen-Scott South Pole Station in December to bring the South Pole Telescope, or SPT, into the largest virtual telescope ever built — the Event Horizon Telescope, or EHT. By combining telescopes across the Earth, the EHT will take the first detailed pictures of black holes.

The EHT is an array of radio telescopes connected using a technique known as Very Long Baseline Interferometry, or VLBI. Larger telescopes can make sharper observations, and interferometry allows multiple telescopes to act like a single telescope as large as the separation — or "baseline" — between them.

"Now that we’ve done VLBI with the SPT, the Event Horizon Telescope really does span the whole Earth, from the Submillimeter Telescope on Mount Graham in Arizona, to California, Hawaii, Chile, Mexico, Spain and the South Pole," Marrone said. "The baselines to SPT give us two to three times more resolution than our past arrays, which is absolutely crucial to the goals of the EHT. To verify the existence of an event horizon, the 'edge' of a black hole, and more generally to test Einstein's theory of general relativity, we need a very detailed picture of a black hole. With the full EHT, we should be able to do this."

The prime EHT target is the Milky Way’s black hole, known as Sagittarius A* (pronounced "A-star"). Even though it is 4 million times more massive than the sun, it is tiny to the eyes of astronomers. Because it is smaller than Mercury’s orbit around the sun, yet almost 26,000 light-years away, studying its event horizon in detail is equivalent to standing in California and reading the date on a penny in New York.

With its unprecedented resolution, more than 1,000 times better than the Hubble Space Telescope, the EHT will see swirling gas on its final plunge over the event horizon, never to regain contact with the rest of the universe. If the theory of general relativity is correct, the black hole itself will be invisible because not even light can escape its immense gravity.

First postulated by Albert Einstein's general theory of relativity, the existence of black holes has since been supported by decades' worth of astronomical observations. Most if not all galaxies are now believed to harbor a supermassive black hole at their center, and smaller ones formed from dying stars should be scattered among their stars. The Milky Way is known to be home to about 25 smallish black holes ranging from five to 10 times the sun's mass.  But never has it been possible to directly observe and image one of these cosmic oddities.

Weighing 280 tons and standing 75 feet tall, the SPT sits at an elevation of 9,300 feet on the polar plateau at Amundsen-Scott, which is located at the geographic South Pole. The University of Chicago built SPT with funding and logistical support from the NSF’s Division of Polar Programs. The division manages the U.S. Antarctic Program, which coordinates all U.S. research on the southernmost continent.

The 10-meter SPT operates at millimeter wavelengths to make high-resolution images of cosmic microwave background radiation, the light left over from the Big Bang. Because of its location at the Earth's axis and at high elevation where the polar air is largely free of water vapor, it can conduct long-term observations to explore some of the biggest questions in cosmology, such as the nature of dark energy and the process of inflation that is believed to have stretched the universe exponentially in a tiny fraction of the first second after the Big Bang.

"We are thrilled that the SPT is part of the EHT," said John Carlstrom, who leads the SPT collaboration. "The science, which addresses fundamental questions of space and time, is as exciting to us as peering back to the beginning of the universe."

To incorporate the SPT into the EHT, Marrone’s team constructed a special, single-pixel camera that can sense the microwaves hitting the telescope. The Academia Sinica Institute for Astronomy and Astrophysics in Taiwan provided the atomic clock needed to precisely track the arrival time of the light. Comparing recordings made at telescopes all over the world allows the astronomers to synthesize the immense telescope. The Smithsonian Astrophysical Observatory and Haystack Observatory of the Massachusetts Institute of Technology provided equipment to record the microwaves at incredibly high speeds, generating nearly 200 terabytes per day.

"To extend the EHT to the South Pole required improving our data capture systems to record data much more quickly than ever before," said Laura Vertatschitsch of the Smithsonian Astrophysical Observatory. A new "digital back end," developed by Vertatschitsch and colleagues, can process data four times faster than its predecessor, which doubles the sensitivity of each telescope.

For their preliminary observations, Marrone's team trained its instrument on two known black holes, Sagittarius A* in our galaxy, and another, located 10 million light-years away in a galaxy named Centaurus A. For this experiment, the SPT and the Atacama Pathfinder Experiment, or APEX, telescope in Chile observed together, despite being nearly 5,000 miles apart. These data constitute the highest- resolution observations ever made of Centaurus A (though the information from a single pair of telescopes cannot easily be converted to a picture).

"VLBI is very technically challenging, and a whole system of components had to work perfectly at both SPT and APEX for us to detect our targets," said Junhan Kim, a doctoral student at the UA who helped build and install the SPT EHT receiver. "Now that we know how to incorporate SPT, I cannot wait to see what we can learn from a telescope 10,000 miles across."

The next step will be to include the SPT in the annual EHT experiments that combine telescopes all over the world. Several new telescopes are prepared to join the EHT in the next year, meaning that the next experiment will be the largest both geographically and with regard to the number of telescopes involved. The expansion of the array is supported by the National Science Foundation Division of Astronomical Sciences through its new Mid-Scale Innovations Program, or MSIP.

Shep Doeleman, who leads the EHT and the MSIP award, noted that "the supermassive black hole at the Milky Way’s center is always visible from the South Pole, so adding that station to the EHT is a major leap toward bringing an event horizon into focus."

This work was funded through NSF grants AST-1207752 to Marrone; AST-1207704 to Doeleman at MIT's Haystack Observatory; and AST-1207730 to Carlstrom at the University of Chicago.

An international research collaboration led by the University of Chicago manages the SPT. The NSF-funded Physics Frontier Center of the Kavli Institute for Cosmological Physics, the Kavli Foundation, and the Gordon and Betty Moore Foundation provide partial support.

The APEX telescope, located in Chile's Atacama Desert, is a collaboration of the European Southern Observatory, the Max Planck Institute for Radioastronomy and the Onsala Space Observatory in Sweden.