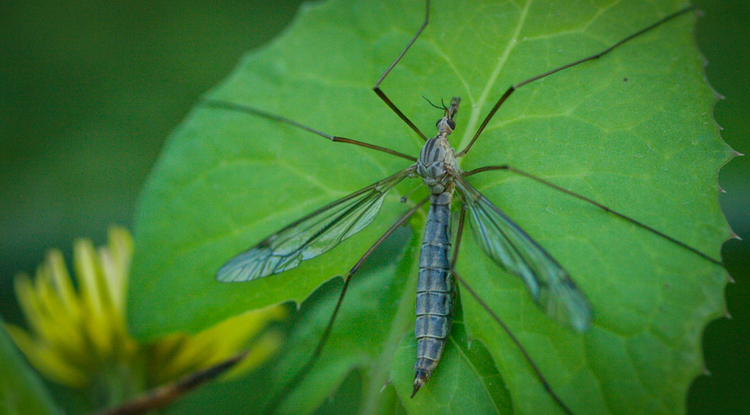 What's Up With All the Crane Flies?

A mass emergence of crane flies has many Tucsonans wondering what the creatures are, why there are so many of them and why they seemed to show up all at once. A University of Arizona insect expert has answers.
Daniel Stolte
,
University Communications
March 5, 2020
Resources for the Media 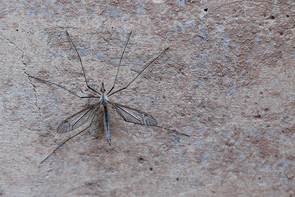 During their brief adult life, crane flies eat very little or nothing at all, which is why they spend much of their time motionless, in an attempt to conserve energy. (Photo: Arlene Islas/UANews) 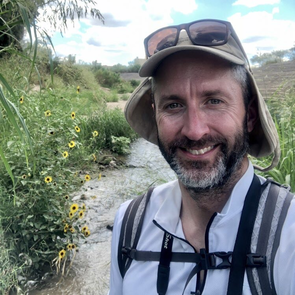 Michael Bogan's research focuses on how drought and water use shape stream habitats and their biodiversity in the arid Southwest. 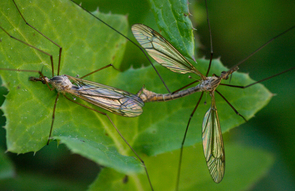 Once crane flies mate, they have fulfilled their life goal and die. (Photo: Daniel Stolte/UANews)

Crane flies flutter around only when absolutely necessary - when searching for mates or stirred up by a predator. As they near the end of their adult life, many are visibly tattered. This one is missing two legs. (GIF: Arlene Islas/UANews)

They've descended in droves on the Tucson area, swarming the weeds in backyards, hovering around lighted windows at night and wafting inside as soon as a door opens. Some people think they're giant mosquitoes, some believe they eat mosquitoes, and others mistake them for spiders – but the these awkward-looking insects, with their spindly legs and fairy-like flutter, aren't any of those.

Michael Bogan, assistant professor of aquatic biology in the University of Arizona School of Natural Resources and the Environment, talked with UANews about the recent "invasion" of crane flies in the Old Pueblo.

Q: What are crane flies? Can you tell us a bit about these creatures and their biology?

A: Crane flies make up a large family – Tipulidae – in the order Diptera, or true flies, and as such they're related to other true flies, like mosquitoes and robber flies. Luckily for us, though, they don't bite! Most of the 15,000-plus species of crane flies in the world spend the larval part of their life living in water bodies, such as rivers and lakes, piles of wet leaves or in damp soil. About 95% of their life is spent in this larval stage, and it can last as long as three years or more. During this time as larvae, crane flies are important for recycling and decomposition – they eat leaves, plants and small bits of organic material in the soil or water bodies where they live. Occasionally, they can reach high densities in flooded fields, pastures or heavily watered lawns, and become a bit of a pest to someone trying to maintain a perfect lawn. However, when they transform into their adult stage – the one we're seeing around Tucson now – pretty much all they do is look for a mate and lay eggs. They'll only occasionally drink water or nectar and don't eat real food or bite anyone.

Q: Why are they showing up in great numbers all over town? Why now, and why here?

A: The heavy rains we had in November helped to wet the soil in Tucson, which triggers more activity in crane fly larvae. We continued to get rains in December and January, and lots of wildflowers and grasses have been growing around town the last couple months, so all of that growth provides good food for crane fly larvae. The larvae grow fastest under moist soil conditions with good food resources, so they've developed quickly in our urban soils and are now transforming into adult crane flies and taking to the skies around town. In dry years, such as 2018, crane fly larvae will simply stay dormant in the soil and wait for better times. They can pass entire dry years, or perhaps even multiple dry years in a row, in a stage of dormancy called aestivation. When moisture returns to the soil during rainy winters, and wildflowers and grasses start growing again, then crane fly larvae will break from aestivation and spring back into action.

Q: Is this mass occurrence unusual in any way? Does it suggest an underlying cause related to climate change, for example?

A: This year's mass emergence or irruption of crane flies is not unusual at all. In fact, we had similar irruptions in Tucson during the wet winters of 2010, 2015 and 2017. It's funny, too, because if you look back to reports in those years, there are plenty of folks saying they've never seen so many crane flies in all their years of living in Tucson. But the fact is that we have a short memory as humans, and when we don't see a species for a few years, we kind of forget the last time it was abundant. There's no data to suggest that this year's mass emergence is any different from past winters with good rainfall and wildflowers. If you were to visit one of our local streams, like Sabino Canyon, you would see crane flies every year. But in our dry desert soil in the city, we only notice them when dormant larvae become active again during wet winters.

Q: Is there any reason people need to be concerned?

A: Nope, no reason for concern. In fact, people should be happy that our birds, bats and other urban wildlife have so much food to eat this winter, in the form of crane flies. The adults, like many insects, are attracted to lights and so they end up on our front porches at night and fly into the house when doors and windows are open. But they don't cause any harm and don't carry any diseases. And some Tucsonans have reported how much their pet cats and dogs enjoy chasing crane flies around the house, so they provide fun for all kinds of animals!

Q: How often should we expect a mass occurrence of crane flies?

A: Anytime we have heavy rains in the fall and winter, especially a heavy rain followed by several other storms, which ensure that the soil stays wet for a couple months at least. Some crane flies may also become active and emerge when our city soils are saturated during the monsoons, but it appears that many species prefer the cooler temperatures of winter.

Q: Are there any other insects that may show up in large numbers within a short period of time?

A: Lots of insects will show up quickly in large numbers, such as cicadas here in the desert and mayflies along larger rivers in the midwestern and eastern U.S. These mass emergences are a smart strategy for many insects because it is much easier to find a mate when there are several thousand or several million other individuals of your species flying around at the same time. It also helps to swamp out the effect of predators – if there are millions of crane flies in Tucson on any given day, it's nearly certain that at least some of them will survive the onslaught of animals feeding on them.

Q: Most of the time, the crane flies we see around the house appear to be doing absolutely nothing. Why is that?

A: Nearly 100% of the energy that crane fly adults have comes from the food they ate as larvae – the adults don't eat any food at all. Imagine if we stopped eating food at age 18, and had to get by our entire adult lives on the food we ate as children. Similarly, crane flies have to conserve their limited energy resources and just hang out doing nothing quite a lot. But when they see potential mates or good places to lay their eggs after mating, then they'll spring into action and fly around.

Q: Anything else that's worth knowing?

A: In Tucson, we're likely just seeing one or two species of crane flies that can tolerate our hot and harsh desert soils as larvae. But if you go out to Sabino Canyon, or any of the other streams in the local mountain ranges, you may find as many as 15 to 30 different species of crane flies living in a single stream pool. They are really important parts of our local ecosystems and contribute greatly to our region's famous biodiversity, both urban and wild. I hope that folks can learn to live peacefully with them for the short periods of time that they fly around our city.