William L. Rathje's three decades worth of landmark studies punctured many earlier assumptions of what happens when people throw things away.
Jeff Harrison
,
University Communications
June 5, 2012
Resources for the Media 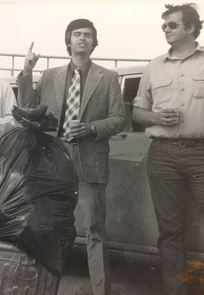 William L. Rathje, at left with a bag of garbage, and Garbage Project field director Wilson Hughes in a 1973 photo. (Photo courtesy UA School of Anthropology)

William L. Rathje, a professor emeritus at the University of Arizona who pioneered the study of modern refuse as a scientific discipline, died at his home in Tucson, Ariz., on May 24.

Officials said Rathje, 66, died of natural causes. Services have not been announced.

Four decades ago, Rathje, then an up-and-coming young archaeologist and already noted for his work on ancient Mesoamerican civilizations, thought that the principles and methods of archaeology could also be used to extract information about contemporary behavior in society changes over time.

A native of Wheaton, Ill., Rathje graduated from the UA in 1967 and earned his doctorate at Harvard in 1971. He returned to the UA that year as a young assistant professor of anthropology where he immediately became a favorite of students, teaching survey courses in archaeology for majors and general education classes for undergraduates, as well as graduate-level Mesoamerican archaeology classes.

Early in his career, Rathje specialized in the archaeology of Mesoamerica, and in Maya culture in particular. In 1973, he was a co-director of the Cozumel Archaeological Project, sponsored by National Geographic, and his models of the rise and fall of classic Maya civilization have been used to explain the fate of other civilizations as well.

Raymond H. Thompson, the former head of anthropology and director of the Arizona State Museum at the UA who hired Rathje, said Rathje's work at Cozumel didn't have the romance of the colossal Maya sites like Tikal with its imposing pyramids and other architecture.

"There was nothing glamorous about it. It was all about pot shards and other evidence of day-to-day life that Bill and others used to identify Cozumel as a major trade center in the Yucatan," Thompson said.

Thompson said he hired Rathje in large part to add younger people to the faculty.

"We were at an interesting stage at that point," Thompson said of the UA anthropology department in the late 1960s and early 1970s.

"Many major departments around the country – Columbia, Berkeley, others – were having problems because their senior faculty members were dying or retired. I realized that this could be our problem, too, as Emil Haury, Edward Spicer and others were near the end of their careers.

"American universities were also growing at an alarming rate. The loss of faculty meant we wouldn't be able to keep up with demand. We needed young people who were promising researchers and good teachers and Bill had a wonderful teaching method and a way of getting students involved," he said.

John W. Olsen, a Regents' Professor and former head of what is now the UA School of Anthropology, said: "Bill's innovative studies in Maya archaeology, especially his work on trade, was very influential."

Olsen said Rathje also taught "thousands of undergraduates in his regular classes, and taught science and fieldwork to many of them as part of the Garbage Project."

In 1973, Rathje began the Garbage Project, which stemmed from an idea by a couple of his students.

The students collected trash from various parts of Tucson and correlated it with census data. Their observed results differed with their assumptions about what residents in specific areas would be expected to be consuming: higher-end products in wealthier areas, and more modest consumption in less-affluent parts of Tucson.

"The ‘ah, ha' moment for Bill was that when he was studying Maya culture, nearly all of what was being excavated was what those people had thrown away," said Albert Bergesen, the head of the UA sociology department and a long-time friend. "He thought, why can't we use these techniques to learn about our own culture?"

Rathje mobilized a small, paid staff and a cohort of volunteer students to expand the project, complete with a tongue-in-cheek logo of a trash can emblazoned with the phrase "Le Projét du Garbage," and began searching for grant support.

"We developed the methodology to study contemporary garbage using archaeological methodology," said Wilson Hughes, the long-time field director for the Garbage Project. "There were no ‘how to' books, so we developed what is now called garbology."

The word "garbology," originally a euphemism used to describe waste management, came to describe Rathje's new endeavor and is now included in the Oxford English Dictionary.

The fact that the Garbage Project was so new proved to be an initial stumbling block in finding operating grants. Many agencies either didn't understand the concept or said that it fell outside the scope of what qualified for funding.

Thompson said Rathje was also stung by criticism from some of his colleagues who felt his experiments in garbage didn't qualify as actual archaeological research.

Said Thompson, "I supported Bill from the beginning. The project had a good reputation in applied anthropology and there was real merit in what he was doing, but he had to face up to the problem that this wasn't an established field.

"My feeling was that if we kept him moving, then the funding would come. Bill brought rigor and methodology to the project that made it work in a very short period of time. In addition, he was able to develop support and camaraderie with students that was very important."

Rathje eventually landed a grant from the U.S. Department of Agriculture, and working with the City of Tucson, he and his staff and students were able to survey homeowners about what they bought, and what and how much they threw away.

City garbage collectors then routed trash containers from the surveyed households to Rathje's lab near the UA football stadium where he and his students sorted, weighed, recorded and analyzed what they found.

They discovered gaps, often significant ones, in what people reported they used and discarded, compared to what actually was found.

Periods of economic stress, for instance, often spurred people to buy perishable goods in quantities to take advantage of price breaks. Frequently, however, much of their groceries – including expensive cuts of meat – spoiled before they could be eaten and ended up being thrown out.

Middle-class households generally wasted more than richer or poorer ones.

Also, households, they also found, consistently under-reported the amount of alcohol being consumed.

In 1987, Rathje turned his attention to the landfills themselves to find out what they contained and how materials behaved inside them. Using a piece of heavy equipment called a bucket auger, workers scooped out vertical shafts of garbage from landfills, first in Arizona and later across the United States.

Each heap of trash brought up was essentially a time capsule. Like an archaeological excavation of a bygone civilization, American garbage told a story of a culture that no longer existed.

Rathje's landfill excavations also revealed an astonishing lack of knowledge not only about what was in the country's waste streams, but the eventual fate of materials buried underground.

Conventional wisdom held that much of the trash in landfills would quickly decompose. Instead, organic materials, like food and lawn waste, were found mummified in the airless depths of sanitary landfills.

Items like hot dogs and lettuce that had been entombed for years looked as if they had just been recently thrown out. Decades-old newspapers were still intact and readable.

Construction materials, originally thought to be virtually non-existent in landfills, actually accounted for a significant portion of waste.

Rathje also ignited a controversy in the 1980s, at a time when concern over discarded plastics began to peak. When surveyed, Americans listed fast-food containers, polystyrene foam and disposable diapers as the three largest contributors of waste.

Garbage Project excavations at more than a dozen landfills around the U.S. showed that, combined, those three items actually made up only about three percent of landfill contents. Rathje theorized that people assumed litter accounted for a larger percentage of the total waste stream than it actually did.

During its 30-year run, the Garbage Project had an impact on fields beyond archaeology, including nutrition, diet and food loss, hazardous waste – including disposal of nuclear materials – and recycling, as well as landfill management. Funding also increased as the project grew, with grants coming from USDA, the Environmental Protection Agency and other federal agencies, as well as state and municipal grants in the U.S., Canada and Australia.

"The wide application of the Garbage Project methodology is what kept it going for those three decades," said Hughes. "We even got a grant from the Navy to study garbage generated by surface combat ships. That was fun – trash at sea."

The project, which eventually was based in the UA Bureau of Applied Research in Anthropology, also formed wide ranging interdisciplinary collaborations with other parts of campus, notably Family and Community Medicine, with microiologist Charles Gerba in soil, water and environmental science, Ray Sierka in the department of chemical and environmental engineering, Bruce Billings in economics and others. The City of Tucson's Department of Environmental Services also worked closely with the project during its entire run.

"Bill was able to show convincingly that archaeology can be applied to solve to a number of modern problems," said Thompson.

In 1990, Rathje earned the Award for Public Understanding of Science and Technology given by the American Association for the Advancement of Science, which cited "his innovative contributions to public understanding of science and its societal impacts by demonstrating with his creative 'Garbage Project' how the scientific method can document problems and identify solutions."

Rathje also won the 1992 Solon T. Kimball Award for Public and Applied Anthropology, given by the American Anthropological Association.

In addition to numerous academic journals, Rathje also wrote several popular articles. In 1992, he collaborated with Atlantic editor Cullen Murphy on a best-selling book, "Rubbish! The Archaeology of Landfills" (HarperCollins).

In 2000, Rathje retired from the UA as professor emeritus and joined Stanford University as a research fellow in archaeology and consulting professor in anthropology, both non-tenured positions. He returned to Tucson in 2010.