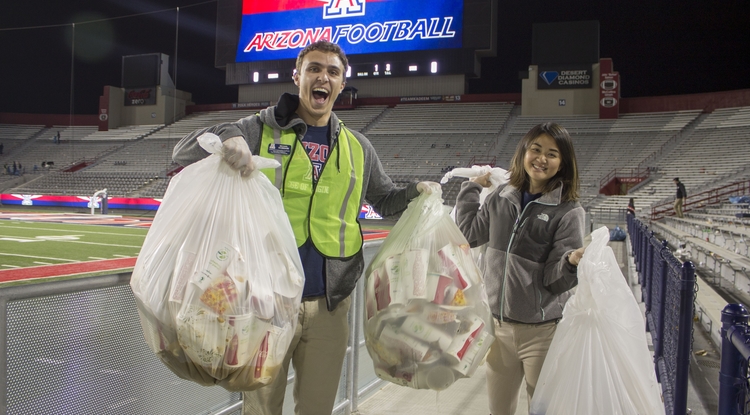 The UA scored a top-three finish in its first Pac-12 Zero-Waste Football Challenge, diverting nearly 12 tons of waste that otherwise would have ended up in a landfill.
Nick Prevenas
,
University Relations - Communications
Dec. 15, 2015
Resources for the Media 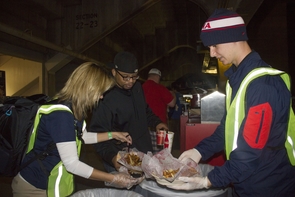 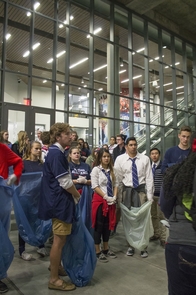 Nov. 14 was a good day to be an Arizona Wildcat fan.

Not only did the University of Arizona football team pull off a double-overtime victory over the 10th-ranked Utah Utes in the final home game of the season, but dozens of environmentally conscious students and faculty hustled throughout Arizona Stadium in an effort to make UA the Pac-12's greenest school.

Ultimately, the UA finished third in the conference's first Zero-Waste Football Challenge, but UA Office of Sustainability director Ben Champion is pleased with the result.

"This was a very strong showing from our group," Champion said. "We doubled our standard diversion rate and kept a lot of recyclable and compostable materials out of landfills."

The zero-waste campaign was an attempt to see which Pac-12 school could post the highest diversion rate, or the percentage of waste kept out of a landfill through composting, recycling or any other sustainability initiative. The typical diversion rate at a UA football game falls between 30-40 percent. On Nov. 14, that rate nearly doubled to 69 percent.

Of the 17.26 tons of total waste, generated from hours of pregame tailgating through the 8 p.m. kickoff into the near-midnight final whistle, the zero-waste team diverted 11.93 tons into recycling and compost.

"We're thrilled with the final result, but we believe we can do a lot better," Champion said. "Now that we know what exactly we're getting into, we can hit the ground running with our processes and strategies in place next time."

The University of Colorado, Boulder, and the University of California, Berkeley, finished first and second, respectively, thanks in large part to their years-long sustained efforts to divert waste at their sporting events. All 12 conference schools took part in the challenge.

"We started a lot of these processes from scratch," Champion said. "We learned a lot and found even more implementable ways we can get that diversion rate even higher."

This campuswide effort brought together the unique strengths of Office of Sustainability, Students for Sustainability, Compost Cats, Facilities Management, Arizona Athletics, the UA Student Unions and the Zona Zoo.

Nearly 100 students either provided instruction at one of the educational waste receptacles, teaching fans the difference between recyclable and compostable materials, or stayed until nearly 2 a.m. picking up and separating waste throughout the stadium.

"We have incredibly active student groups that went above and beyond for this game," Champion said. "We established a lot of good partnerships and had buy-in from a number of different organizations across campus."

Much of the excess material, such as the compostable soda cups and nacho bowls, was purchased by the UA Student Unions specifically for this contest — but soon will become standard operating procedure at UA football games.

Champion said that the positive momentum from the event hopefully will carry into 2016, when his goal is to make every major event on campus, athletic or otherwise, as close to zero-waste as possible.

"We showed a willingness to put ourselves out there and experiment," Champion said. "We're not a group that shies away from a challenge."