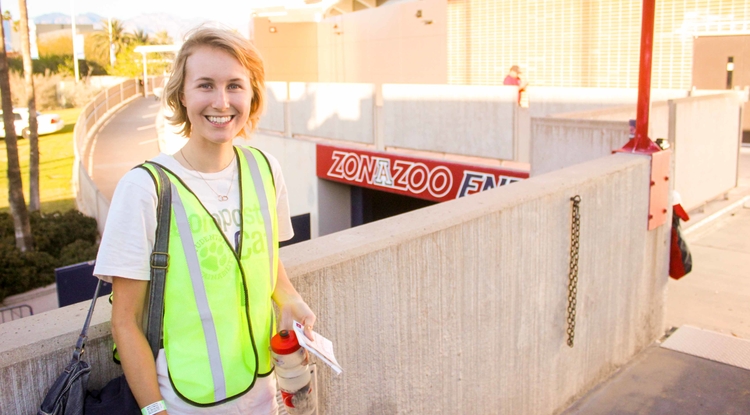 The University of Arizona will be keeping track of two scoreboards on Saturday.

While the UA football team looks to put points on the board against the No. 10-ranked Utah Utes in the Wildcats' home finale, the Office of Sustainability will be locked into a Pac-12 Conference battle of its own.

Instead of touchdowns and field goals, however, the sustainability team will be tracking recycling and composting levels in an attempt to make the UA the conference's "greenest" fan base.

Saturday marks the UA's first zero-waste football game — a campuswide effort involving the Office of Sustainability, Students for Sustainability, Compost Cats, Facilities Management, Arizona Athletics, the UA Student Unions, the Zona Zoo and other groups to bring the amount of waste generated at Arizona Stadium as close to zero as possible.

"Roughly 10 to 20 percent of the American populace is heavily engaged in environmental issues, but more than 60 percent of Americans identify as sports fans," said Office of Sustainability director Ben Champion. "This is an incredible opportunity for us to engage a huge audience in our efforts and spread our message, while making a significant environmental impact on Saturday."

The contest among Pac-12 schools will look at each school's participation level and innovation, in addition to the raw diversion rate — the percentage of waste that was kept out of a landfill through composting, recycling or any other sustainability initiative.

Julia Rudnick, the coordinator of sustainability programs, said there will be more than 40 different waste stations throughout the stadium, with more than 100 students on hand to encourage and educate fans before, during and after the game.

While this is the first zero-waste effort for a UA football game, it's far from the first time these campus organizations have worked together to reduce waste at sporting events.

The UA's "Greening the Game" initiative — a student-run effort to promote recycling while celebrating UA athletics — began in 2012 to collect recyclable waste at sporting events. The UA also took part in the spring's zero-waste event, when the men's basketball team took on the California Golden Bears on March 5. The UA won that game, 99-60, and the zero-waste team diverted nearly 70 percent of the waste typically generated by a McKale Center crowd.

The football game presents a different set of challenges, however. Attendance for the March basketball game was 14,655, while the average UA football game draws more than 50,000 fans, along with the hours of pregame tailgating that takes place around the stadium.

"We've focused a large part of our outreach efforts toward the Zona Zoo and we've come up with a number of creative ways to engage the student section before, during and after the game," Rudnick said. "We learned a lot from the zero-waste basketball game, and we're excited for what we can accomplish at the football game."

The Office of Sustainability has proved that it can handle events of this magnitude through its work with Tucson Meet Yourself, which draws as many as 120,000 people over three days. Chet Phillips, the coordinator of Students for Sustainability and Compost Cats, said the zero-waste football game is an excellent opportunity to help make these diversionary efforts the norm throughout campus.

"Around 80 percent of everything that ends up in a landfill could either be composted or recycled," Phillips said. "We have a long way to go, but we're committed."

Phillips added that the coordinated efforts among these various campus units have been critical in implementing the zero-waste initiative. The UA Student Unions, for example, has changed some of the purchasing normally done for football games, opting for compostable soda cups and nacho bowls, while Arizona Athletics has agreed to post information about the zero-waste contest on the big video screen throughout the game.

"Sustainability efforts at the UA are broadly collaborative, and they must be in order to succeed," Phillips said. "Many of our students do a phenomenal job initiating these projects, but none would have succeeded without buy-in from our partners on campus."

The UA takes pride in its status as a thought leader on sustainability issues, Champion said. The zero-waste football game is another step on the path toward the Office of Sustainability's ultimate goal: a zero-waste university.

"Our intention is to make this the norm," Champion said. "We'll take it one project at a time, but we want to see the University of Arizona set the standard for campus sustainability."