Zooming In on an Infant Solar System

For the first time, astronomers have observed solar systems in the making in great detail.
Daniel Stolte
,
University Communications
June 10, 2010
Resources for the Media 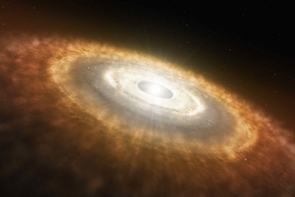 Like a raindrop forming in a cloud, a star forms in a diffuse gas cloud in deep space. As the star grows, its gravitational pull draws in dust and gas from the surrounding molecular cloud to form a swirling disk called a "protoplanetary disk." This disk eventually further consolidates to form planets, moons, asteroids and comets. (Credit: NASA/JPL-Caltech)

A team led by University of Arizona astronomer Joshua Eisner has observed in unprecedented detail the processes giving rise to stars and planets in nascent solar systems.

The discoveries, published in the Astrophysical Journal, provide a better understanding of the way hydrogen gas from the protoplanetary disk is incorporated into the star.

By coupling both Keck telescopes on Mauna Kea in Hawaii with a specifically engineered instrument named ASTRA (ASTrometric and phase-Referenced Astronomy), Eisner and his colleagues were able to peer deeply into protoplanetary disks – swirling clouds of gas and dust that feed the growing star in its center and eventually coalesce into planets and asteroids to form a solar system.

The big challenge facing Eisner's team lies in obtaining the extremely fine resolution necessary to observe the processes that happen at the boundary between the star and its surrounding disk – 500 light years from Earth. It's like standing on a rooftop in Tucson trying to observe an ant nibbling on a grain of rice in New York's Central Park.

"The angular resolution you can achieve with the Hubble Space Telescope is about 100 times too coarse to be able to see what is going on just outside of a nascent star not much bigger than our sun," said Eisner, an assistant professor at UA's Steward Observatory. In other words, even a protoplanetary disk close enough to be considered in the neighborhood of our solar system would appear as a featureless blob.

Combining the light from the two Keck telescopes provides an angular resolution finer than Hubble's. Eisner and his team used a technique called spectro-astrometry to boost resolution even more. By measuring the light emanating from the protoplanetary disks at different wavelengths with both Keck telescope mirrors and manipulating it further with ASTRA, the researchers achieved the resolution needed to observe processes in the centers of the nascent solar systems.

Protoplanetary disks form in stellar nurseries when clouds of gas molecules and dust particles begin to collapse under the influence of gravity.

Initially rotating slowly, the cloud's growing mass and gravity cause it to become more dense and more compact. The preservation of rotational momentum speeds up the cloud as it shrinks, much like a figure skater spins faster as she tugs in her arms. The centrifugal force flattens the cloud into a spinning disk of swirling gas and dust, eventually giving rise to planets orbiting their star in roughly the same plane.

Combining the Keck interferometer with the spectro-astrometry technique, Eisner and his collaborators were able to distinguish between the distributions of gas, mostly made up of hydrogen, and dust, thereby resolving the disk's features.

"We were able to get really, really close to the star and look right at the interface between the gas-rich protoplanetary disk and the star," said Eisner, who serves as project scientist on the ASTRA team.

Astronomers know that stars acquire mass by incorporating some of the hydrogen gas in the disk that surrounds them, in a process called accretion.

"We want to understand how material accretes onto the star," Eisner said. "This process has never been measured directly."

Accretion can happen in one of two ways.

In one scenario, gas is swallowed as it washes up right to the fiery surface of the star.

In the second, much more violent scenario, the magnetic fields sweeping from the star push back the approaching gas and cause it to bunch up, creating a gap between the star and its surrounding disk. Rather than lapping at the star's surface, the hydrogen atoms travel along the magnetic field lines as if on a highway, becoming super-heated and ionized in this process.

"Once trapped in the star's magnetic field, the gas is being funneled along the field lines arching out high above and below the disk's plane," Eisner explained. "The material then crashes into the star's polar regions at high velocities."

In this inferno, which releases the energy of millions of Hiroshima-sized atomic bombs every second, some of the arching gas flow is ejected from the disk and spews out far into space as interstellar wind.

Eisner's team pointed the telescopes at 15 protoplanetary disks with young stars varying in mass between one half and 10 times that of our sun. This sample of disks, all located in our own galaxy, the Milky Way, represents by far the largest of its kind.

"We could successfully discern that in most cases, the gas converts some of its kinetic energy into light very close to the stars" he said, a tell-tale sign of the more violent accretion scenario.

"In other cases, we saw evidence of winds launched into space together with material accreting on the star," Eisner added. "We even found an example – around a very high-mass star – in which the disk may reach all the way to the stellar surface."

The solar systems the astronomers chose for this study are still young, probably a few million years old.

"These disks will be around for a few million years more," Eisner said. "By that time, the first planets, gas giants similar to Jupiter and Saturn, may form, using up a lot of the disk material."

More solid, rocky planets like the Earth, Venus or Mars, won't be around until much later.

"But the building blocks for those could be forming now," he said, which is why this research is important for our understanding of how solar systems form, including those with potentially habitable planets like Earth.

"We are going to see if we can make similar measurements of organic molecules and water in protoplanetary disks," he said. "Those would be the ones potentially giving rise to planets with the conditions to harbor life."

Eisner's co-authors on the paper are John Monnier from the University of Michigan; Julien Woillez, Sam Ragland and Peter Wizinowich from Keck Observatory; Rachel Akeson and Rafael Millan-Gabet from NASA's Exoplanet Science Institute at Caltech; James Graham at the University of California Berkeley; Lynne Hillenbrand from Caltech's Astrophysics department; and Jorg-Uwe Pott from the Max-Planck-Institut fuer Astronomie in Heidelberg, Germany.

The ASTRA project was made possible by a Major Research Instrumentation Grant from the National Science Foundation.