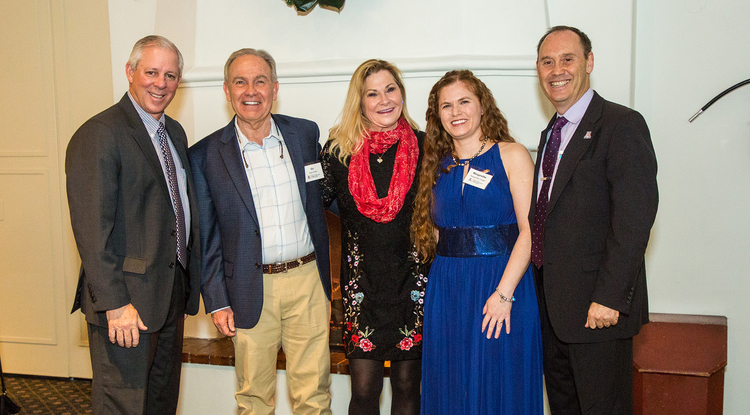 Margarethe Cooper, an assistant professor of practice in animal and comparative biomedical sciences, is the inaugural holder of the Victor P. Smith Endowed Chair in Food Safety Education.
Jennifer Yamnitz
,
UA College of Agriculture and Life Sciences
Jan. 25, 2019
Resources for the Media

The University of Arizona School of Animal and Comparative Biomedical Sciences has received a $1.5 million gift from Victor P. "Vic" Smith to establish an endowed chair in food safety education.

As companies strive to ensure the health and safety of consumers through all stages of the complex product supply chain, education and training in food safety is becoming increasingly important to the industry. From growing techniques, to processing, shipping, and final preparation, food must be protected from contamination. When contamination does occur, a process must be in place to quickly identify and remove tainted food so that it does not reach the end consumer.

"Education in food safety is becoming increasingly important in our lives," said Patricia Stock, interim director of the School of Animal and Comparative Biomedical Sciences. "The food safety bachelor's degree was created to provide a platform to educate and prepare our students to become the lead force in the agriculture food safety industry. The generous contribution of Mr. Smith will not only contribute to the enhancement of student educational and engagement opportunities, but will also help increase the visibility of our food safety program at the national and international levels."

Stock has selected Margarethe Cooper, an assistant professor of practice in animal and comparative biomedical sciences, to be the inaugural holder of the Victor P. Smith Endowed Chair in Food Safety Education.

During her postdoctoral training at the UA, Cooper studied the bacterium Campylobacter jejuni in the food chain. She was also a research affiliate for the U.S. Department of Agriculture in Albany, California, where she conducted research in the food safety and microbiology unit, analyzing the molecular interaction of Escherichia coli O157:H7 on lettuce using next-generation sequencing. The support of the endowed chair will help Cooper to develop and promote food safety educational programs and connect students with industry partners for food safety-related career opportunities.

"Since its establishment as a land-grant university, the UA has taken very seriously its commitment to partnering with the state's agricultural industry by working with growers and ranchers to solve challenges, translate research into real-time best practices, and strengthen Arizona's economy," said UA President Robert C. Robbins. "This gift from Victor Smith will help us do even more of that work by supporting both research and education in food safety. We are so grateful for his generosity and his partnership."

Smith grew up in Pueblo, Colorado. He studied economics and business law at the University of Colorado from 1970 to 1974. He went on to study finance at Arizona State University in 1975. He joined Skyview Cooling Co. in the fall of 1975 and quickly earned a leadership role, becoming vice president in 1977. In 1988, he became president of Skyview Cooling Co. Throughout the 1990s and early 2000s, Smith added leadership roles in other JV Smith companies to his portfolio. In 2012, he accepted his current role as CEO with oversight of all eight of the affiliated companies.

In addition to his work with JV Smith Cos., Smith is actively involved in Arizona community and agricultural organizations, having served on more than a dozen boards over the past 30 years. He is currently a board member for the Western Growers Association, the Produce Marketing Association, the Arizona Commerce Authority and the Arizona Department of Agriculture Advisory Council.

Smith is also a longtime supporter of the UA College of Agriculture and Life Sciences. In 2005, he named a conference room for his parents in the Glen G. Curtis Building at the Yuma Experiment Station. He also helped to establish the Yuma Center for Excellence in Desert Agriculture.

"Over the years, Vic has been not only one of our biggest supporters, but an inspiration to me to innovate and a leadership mentor," said Shane Burgess, UA vice president for agriculture, life and veterinary sciences, and Cooperative Extension. "He is an exemplary advocate for great education that puts great science to work. His gifts to higher education demonstrate his belief that education is the key to changing lives and generating the future leaders of Arizona agribusiness. He is especially excited that our food safety curriculum will be taught in Spanish as well as English, and so will be even more accessible to professionals already working in this industry."

Endowed chairs are vitally important to the university's future, said John-Paul Roczniak, president and CEO of the UA Foundation.

"Vic Smith has made a gift that will keep the UA at the forefront of this field and provide opportunities to generations of deserving faculty and students," Roczniak said.

"He is known for promoting the use of technology in harvesting, quality control, and worker safety, and has developed, and inspired others to develop, innovations that have advanced his entire industry," Burgess said. "He's completely changed the sector he's been in for the past 30 years. He's a Fourth Industrial Revolution visionary."

Over the years, Smith and his wife, Karen, have supported numerous charitable causes. In 2013, they created the Smith Family Foundation to ensure donations were being maximized to meet community needs and to offer scholarship opportunities to the dependents of JV Smith Cos. Employees. The foundation has supported Amberly's Place, KIDS CuddleKit Closet, YMCA Yuma, YRMC Foundation-School Drive and Youth Initiative, Yuma Catholic High School, Yuma Community Food Bank, and the Yuma County Science Fair.

Helping the community is also part of the ethos of JV Smith Cos. In 2014, the organization launched the Power Plate, which uses fun characters and a plate with sections to teach schoolchildren that half of their plate should be filled with fruits and vegetables. The program increased consumption of vegetables by 62 percent in one elementary school in Yuma School District One.