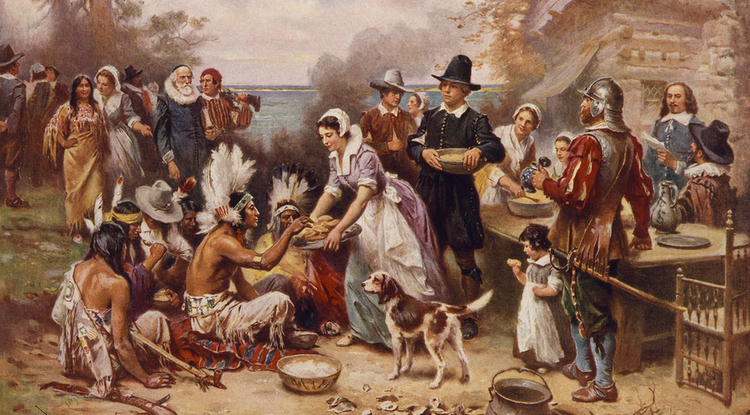 Illustrations of the first Thanksgiving often are historically inaccurate, such as this 1932 painting by Jean Leon Gerome Ferris. The outfits the Pilgrims are shown wearing are wrong, and the Wampanoag did not wear feathered war bonnets, nor would they have been sitting on the ground. (Photo: Library of Congress Prints and Photographs Division)

3 Things You Should Know About Thanksgiving

For many Native Americans, Thanksgiving is not synonymous with blessings and praise. Rather, the day is a reminder of a dark history that is rarely told in its entirety.
Stacy Pigott
,
University Communications
Nov. 20, 2017
Resources for the Media
Ronald Trosper facilitated a discussion on the real meaning of Thanksgiving as part of Native American Heritage Month. 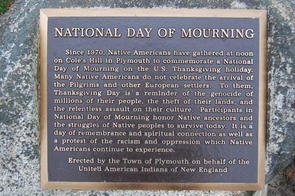 On Nov. 23, Native Americans will gather in Plymouth, Massachusetts, to commemorate a National Day of Mourning, rather than Thanksgiving. A similar gathering will take place in San Francisco, California, on Alcatraz Island. (Photo: United American Indians of New England)

Year after year, elementary school children create paper turkeys and dress up as Pilgrims and Indians to re-create the original Thanksgiving feast. It is portrayed as a great celebration between survivors of the Mayflower, who established Plymouth Colony, and friendly Native Americans from the Wampanoag tribe.

The quaint retelling of that Thanksgiving feast was perpetuated by Abraham Lincoln, whose proclamation on Oct. 3, 1863, made the last Thursday in November "a day of Thanksgiving and Praise to our beneficent Father who dwelleth in the Heavens" for "blessings of fruitful fields and healthful skies," and a peaceful end to the Civil War.

For many Native Americans, though, Thanksgiving is not synonymous with blessings and praise. Rather, the day is a reminder of a dark history that is rarely told in its entirety.

On Monday, Ronald Trosper, professor of American Indian studies at the University of Arizona, gave a presentation titled "The Real Meaning of Thanksgiving" as part of Native American History Month. The event, sponsored by the Native American Student Association, discussed Thanksgiving and its ties to settler colonialism.

According to GlobalSocietyTheory.com, "Settler colonial invasion is a structure, not an event: Settler colonialism persists in the ongoing elimination of indigenous populations, and the assertion of state sovereignty and juridical control over their lands."

"Is Thanksgiving an innocent celebration or are there some undertones that need to be addressed?" Trosper asked. "The process of this spreading of settlers across the United States has been described by scholars as settler colonialism, and it has some particular characteristics. The issue is, which of these characteristics are illustrated by the Thanksgiving celebration?"

Test your knowledge of Thanksgiving history by considering these true-or-false statements:

1. The settlers respected the indigenous peoples' unique culture and religion.

"When Indians harvested, the thanks went to the land and the beings that provided themselves as food. That's a very fundamental indigenous belief, that we thank those beings that support our livelihood," Trosper said. "Then at dinner there was no prayer, they just started eating. They already thanked the land when they harvested. And they did not thank the Lord for providing the food, because the food came from the land, it did not come from the Christian God. At Thanksgiving, people celebrate the Christian God."

Native Americans did not pray to a Christian God, although the settlers would try to change that. One of the characteristics of settler colonialism is the settlers' attempt to convert indigenous peoples to the settlers' religion. The settlers, who had left England due to religious dissention, brought their religion with them to the New World.

From Lincoln's proclamation to modern-day traditions, many Americans view Thanksgiving as a day to give thanks for their blessings, often in the form of a pre-feast religious prayer. In contrast, many Native Americans did, and still do, celebrate the fall harvest.

2. Thanksgiving was the beginning of a long friendship between the Pilgrims and the Indians.

"A lot of people have put forth images of what Thanksgiving is really about, seeming to say that Natives were welcoming the settlers and providing them food. Well, they were generous and they did provide food, but it was not reciprocated," Trosper said. "Eventually in New England, where Thanksgiving was said to be, the settlers pushed the Indians aside. That's where people lose the history. They don't know about King Philip's War."

After the initial Thanksgiving feast, tensions rose between the settlers and indigenous peoples and reached a breaking point by 1675, resulting in King Philip's War. Spanning three years, the conflict raged throughout New England, destroying 12 towns and almost completely destroying the Wampanoag tribe and their allies, the Narragansett tribe from Rhode Island.

"The settlers arrive, take control of the land and push the indigenous people off, and often they just eliminate. It's not a question of sharing the land," Trosper said, pointing to another characteristic of settler colonialism. "Very often the indigenous people said, 'We're happy to share the land with you if you accept our sovereignty over it and if you take care of it the way we want you to take care of it.' But that wasn't part of the picture."

3. The settlers learned agricultural practices from the Indians.

Another characteristic of settler colonialism is the settlers adopting a means of making a living that they have learned from the indigenous peoples. In the case of the Pilgrims and Indians, that was agriculture.

Even the UA campus sits on land that formerly was farmed by Native Americans.

"There was a mission here, and the missionaries had to learn how to farm the land from the O'odham," Trosper related. "The fact that this area was occupied by agricultural Indians is little known."

In the late 19th century, settlers dammed the Gila River and diverted the water from the Indians' farms to their own. Without lifegiving water to sustain their crops, Native American communities were impoverished and their reservations had little water.

"On Thanksgiving, the settlers are celebrating the land and what the land produces, and how did they get that land? They took it," Trosper said. "Thanksgiving seems to be a celebration of taking the land away."

In addition to losing their land, Native Americans often paid a large price in human life, as well.

"Native Americans who have gone to state schools and done activities in their grade school classrooms celebrating Thanksgiving may have started to appreciate Thanksgiving as an American thing and not realize that it has negative undertones," Trosper said. "The general public knows what is told to them when they were in grade school, and people celebrated and made little turkey things and such. But if they dressed up as Indians to celebrate Thanksgiving, well, that's addressed as one of the characteristics of settler colonialism. The settlers pretend to be Indians as a way to make themselves indigenous.

"But Native Americans who have been raised in a family that's more aware probably have parents who have explained the real history behind Thanksgiving and said it's nice to celebrate the harvest in the fall. We have to realize that Thanksgiving has these negative overtones, and that it denies there was so much taking away from Indians, because it's a very happy celebration. It looks like the Indians and the settlers are friendly. But that's a denial of what the reality was of the way that settler colonialism occurred."