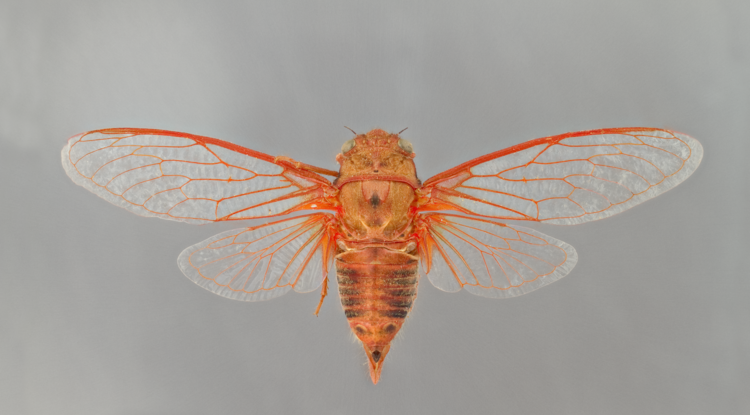 Okanaga rubrovenosa, literally meaning "the red-veined one from Okanaga Valley," is one of the most prominent cicada species found in the Southwest. (Photo: Charles Hedgcock)

7 Things You Didn't Know About Cicadas

'Tis the season of the dry heat in Arizona, and seasoned desert dwellers know that once the trees resound with the buzz of cicadas, summer is here. The UA's Gene Hall enlightens us about the insects.
Daniel Stolte
,
University Communications
June 12, 2017
Resources for the Media
Extra Info:

For questions about cicadas or other insects found in Arizona, contact Gene Hall at 520-621-6446 or wehall@email.arizona.edu. 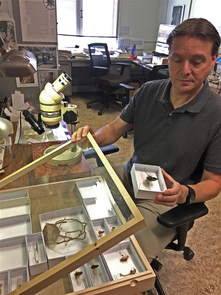 Gene Hall's position is jointly funded by the University of Arizona's College of Agriculture and Life Sciences, where he manages the insect collection, and CALS Cooperative Extension, which has him provide outreach services to the community and share his expertise in various areas, including forensics. (Photo: Daniel Stolte/UANews) 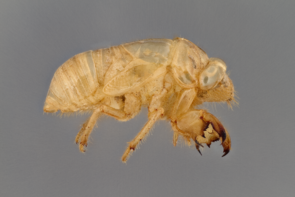 These claws are made for diggin': Cicadas spend the majority of their lives underground as nymphs. When the time comes to emerge and turn into an adult, they leave behind a molt of their former juvenile self, shown here. (Photo: Charles Hedgcock) 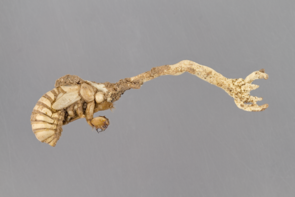 Remember the movie "Alien"? Nature has been there, done that. Certain fungi specialize on infecting the cicada nymph while it lives in the soil, feeding on it and killing it in the process. Once the fungus is ready to reproduce, it sprouts a fruiting body, straight from the nymph's head. (Photo: Charles Hedgcock)

Once they're here, you know summer's here, too: You don't have to live in the desert Southwest for very long to learn that once the first cicadas of the year can be heard broadcasting their piercing buzz from invisible locations in the trees, it's time to kiss spring goodbye and say hello to the blast furnace that is June in much of Arizona.

We talked with UA entomologist Gene Hall about cicadas and how they do the things they do. We bet you didn't know that:

The body of a cicada is similar to that of a violin or a guitar, in that much of it consists of empty, air-filled spaces that act like a resonating chamber and amplify the sound they generate.

"The loud noise we hear is the male's mating call — females are silent," Hall says. "Some species produce that loud whirl that we hear around here, while others make more of a soft clicking sound. Each species of cicada has its own mating call, which can range from soft clicking to loud buzzing. The calls vary from species to species. Some males will stay in the same spot and call continuously, whereas others will fly off and call from another spot. They also use noise to drown each other out or cancel calls from other competing for females. To pick up the sound, both sexes have structures located in the front of the abdominal area, under the wings, called tympana, which basically function like an eardrum."

2. Cicadas are the loudest insects in the Southwest, and they make noise the same way as a popular vintage toy.

Remember those clicker toys made from thin metal, often shaped and painted like a frog? Where you use your thumb to push and release a flexible tongue on the underside to make noise? Male cicadas produce sound in a very similar way, Hall explains. "On the underside of their bodies, the males have a structure called a tymbal. It's unique to cicadas and consists of a pair of thin, hardened membranes that they flex with specialized muscles, and that creates a clicking sound. That, along with hollow cavities, is how they achieve the volume. In addition, the angle by which the insect props itself up on the twig or trunk it is sitting on helps control the resonation, like a speaker bouncing sound off a wall."

3. Cicadas can turn themselves into an evaporative cooler.

Why are cicadas active during the hottest part of the day?

"Because they can," Hall says. "Cicadas have figured out a way of sweating, if you will. They feed on plant sap, so they are constantly sucking in liquids, and as the temperature gets hotter and hotter, and they start to overheat, they remove the water from their blood and pass it through ducts in their body. As it exits their body through pores on their thorax, they get that continuous evaporative cooling. When people talk about how it seems like it just feels hotter when they hear the cicadas, that's because they're out when it is hot. That trick allows them to be active when it's too hot for the predators that feed on them. Many reptiles and birds and mammals that would normally go after them seek shelter from the heat when it gets to be 110 degrees or more, but cicadas can still be active and feeding and sending out mating calls."

"The adult female lays her eggs into twigs," Hall says. "When the eggs hatch, an immature stage — called a nymph — falls onto the ground, where it will then burrow. The nymph lives underground and feeds on plant roots with its piercing-sucking mouth parts, moving along chambers and tunnels that it digs with its strong, clawlike front legs. When it's ready to molt into an adult, the nymph crawls out of the ground and looks for a surface to cling to, like the base of a tree or a building. It will then shed its final nymphal skin. The newly emerged adult will be pale and soft-bodied until the exoskeleton hardens, and then proceeds to live the remainder of its life. Like the nymphs, the adults possess piercing-sucking mouthparts and are plant feeders.

"Cicada life cycles can range from three years for our local species and up to 17 years for those in the Midwest and Eastern United States," Hall says. "In the species we have around here, the underground stage lasts anywhere from a couple to three to five years. We don't have the big brooding cycles like the 13- or 17-year cicadas in the Midwest and Eastern parts of the U.S. In our region, they stagger their emergence time, so you will see cicadas come out every year. We think the nymphs emerge when certain environmental cues fall together into place and the conditions become just right — for example, as soon as the ground reaches a certain temperature. They emerge usually in the evenings or at night, and the next day you might find their nymphal skin where they've emerged from. They're very vulnerable when they emerge, because the body of the adult starts out soft. It takes awhile to harden up and for the wings to fully push out and develop. It probably takes a few hours. It can't be too long because they have to be active the next morning. The adult lives only for two to three weeks, which is kind of typical for most insects."

Ever tried to locate a cicada you are hearing, only to find nothing there?

"They're very difficult to get to," Hall says. "You can hear them, but once you start walking to a tree, it's very hard to home in on them. I think it's because the sound is so big, it's hard to narrow where it's coming from, even if you think you know where it's coming from. That is a good strategy of distracting a predator. If you walk up to a branch or a twig that the cicada is on, it'll move around to the back side and hide. Also, they stop calling as soon as you get too close, making it even more difficult to find them."

6. Cicadas have enemies that are the stuff of nightmares.

"One of their enemies is the cicada killer wasp," Hall says. "These are wasps that home in on cicadas, much like the tarantula wasp seeks out tarantulas. The female wasp flies around searching for cicadas, and when it finds one, it stings it and paralyzes it, then carries it to a burrow, lays one egg on it, and then closes the burrow up. It's a good-size wasp, because you have to figure it has to be able to grab the cicada and fly with it. The cicada remains alive underground while the wasp larva is feeding on it. And the larva feeds at such a rate that it doesn't immediately kill the cicada. During their underground life, some cicadas become infected with the spores of a fungus that will then grow inside their bodies, eventually killing them and sprouting a fruiting body from their heads."

7. The Southwest is home to the highest insect diversity in the nation, and cicadas are no exception.

Cicada species in Arizona range in size from the large Southwestern giant floodplain cicada, only slightly shorter than the smallest North American hummingbird, to the continent's smallest cicada, Beameria venosa, which can sit on a quarter coin with room to spare. "In our insect collection, we have 36 species of cicadas from the state," Hall says. "In total, there probably are about four dozen species in the state. One of the most common in the Tucson area is the Apache cicada (Diceroprocta apache)."

Watch up close as a cicada sings its song. (Courtesy of Phil Harris/Creative Commons)