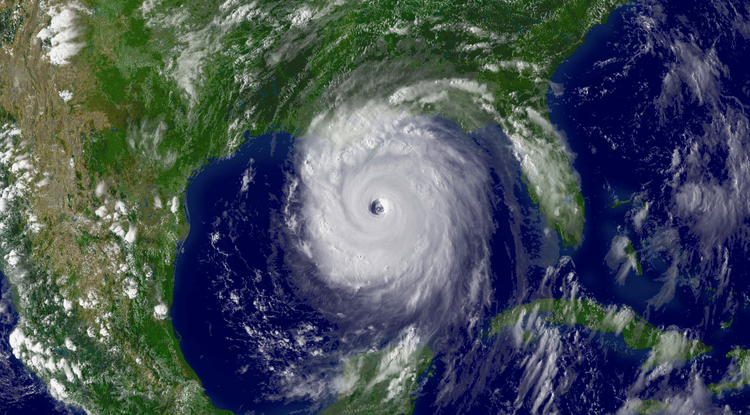 An image of Hurricane Katrina taken Aug. 28, 2005, as the storm’s outer bands lashed the Gulf Coast of the U.S. a day before making landfall and leaving a path of destruction in its wake. (Credit: NOAA)

A UA team's model improves the accuracy of forecasts for the North Atlantic and Gulf of Mexico by 23 percent. And it can generate predictions by the start of the six-month hurricane season, which could help emergency planning.
Mari N. Jensen
,
UA College of Science
March 31, 2015
Resources for the Media
Extra Info: 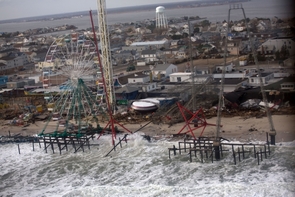 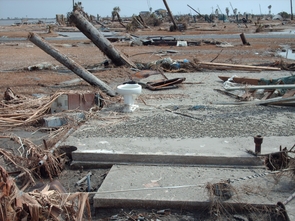 A photo taken on Sept. 18, 2008, shows damage on the Bolivar Peninsula of Texas from Hurricane Ike. (Credit: National Weather Service/NOAA)

A better method for predicting the number of hurricanes in an upcoming season has been developed by a team of University of Arizona atmospheric scientists.

The UA team’s new model improves the accuracy of seasonal hurricane forecasts for the North Atlantic and the Gulf of Mexico by 23 percent. The team’s research paper was published online in the journal Weather and Forecasting on March 25.

"Our model is better at predicting the number of seasonal hurricanes in the Atlantic than the other existing models," said first author Kyle Davis, a master’s student in the UA atmospheric sciences department. "On average, our model has 23 percent less error for predicting hurricanes occurring since 2001."

Hurricanes are storms with maximum wind speeds in excess of 73 mph and are among the most damaging natural disasters in the U.S. The Atlantic hurricane season lasts from June 1 to Nov. 30.

The UA model can provide its forecast by the start of hurricane season, which allows people to prepare better for the upcoming season, Davis said. "Tens of millions of people are threatened by Atlantic hurricanes. It affects their properties, it affects their lives."

Other investigators have estimated that damages from U.S. hurricanes from 1970 to 2002 cost $57 billion in 2015 dollars — more than earthquakes and human-caused disasters combined for the time period.

Better seasonal predictions can help cities and governments in emergency management planning, said co-author Xubin Zeng, who holds the Agnese N. Haury Chair in Environment and is a UA professor of atmospheric sciences.

The paper, "A new statistical model to predict seasonal North Atlantic hurricane activity," by Davis, Zeng and Elizabeth A. Ritchie, a UA atmospheric sciences professor, is scheduled for print publication in a future issue of the journal of Weather and Forecasting. Science Foundation Arizona, the National Science Foundation and NASA funded the research.

Good forecasts of hurricane seasons have been around only since the early 1980s, Zeng said. The historical average in the 20th century was six hurricanes per year.

Until about the late 1990s, the existing models did a good job of predicting how many hurricanes would occur each year. However, in the 21st century the number of hurricanes per season became more variable, with 15 occurring in 2005 but only two in 2013.

Zeng wondered why the computer models didn’t work well anymore, and his new graduate student Davis, an actuary, wanted to study natural disasters because of their impact.

Zeng challenged Davis to develop a hurricane forecasting model that surpassed the existing ones.

The other forecasting models relied heavily on the state of the El Niño climate cycle, a three-to-seven-year cycle that affects weather all over the globe.

One of the UA team’s innovations was using the state of a longer-term climate cycle called the Atlantic Multidecadal Oscillation to judge how much influence El Niño has in a particular year.

The AMO affects ocean temperatures, cycling from colder to warmer and back over a time scale of approximately 40-70 years. The AMO was in a warm phase from the late 1920s to the early 1960s and started cycling back toward warm in the late 1990s. Warmer sea surface temperatures generally generate more hurricanes.

Zeng suggested also including the force of the wind on the ocean — an innovation that, to the best of the team’s knowledge, no other statistical model used. Strong winds reduce sea surface temperatures because they mix the ocean layers, thereby bringing cooler, deeper water to the surface.

After much trial and error, Davis met Zeng’s challenge. The model Davis developed does a better job of forecasting the Atlantic hurricane season by incorporating the force of the wind on the ocean and the sea surface temperature over the Atlantic. The model includes the effect of El Niño only for years when the AMO is in the cool phase.

Compared with the other models, the UA model de-emphasized the role of El Niño when the AMO is in the warm phase, as it has been for the past 15 years.

Next the team plans to examine the forecasting models for the eastern Pacific hurricanes — the ones that hit Baja California and the western coast of Mexico and Central America.