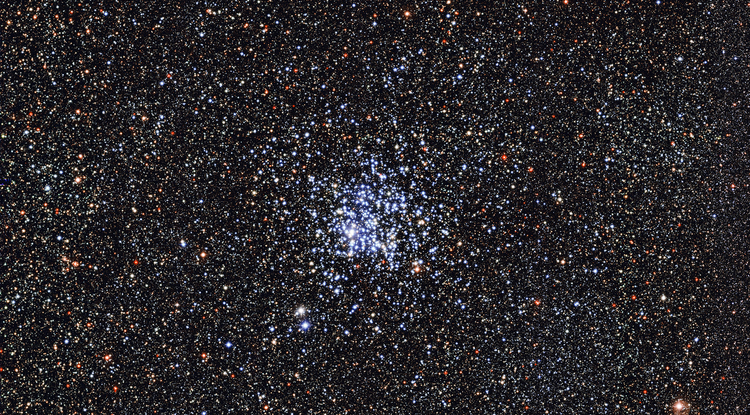 Aging a Flock of Stars in the Wild Duck Cluster

The way they move belies the true ages of the almost 3,000 stars populating one of the richest star clusters known. Astronomers recently discovered the stars all were born in the same generation, solving a long-standing puzzle about how stars evolve.
Emily Walla
,
UA/NASA Space Grant Intern, University Communications
Nov. 7, 2018
Resources for the Media 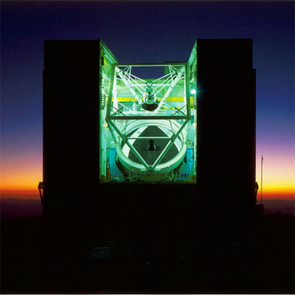 The MMT Telescope is located on Mount Hopkins, 37 miles south of Tucson. When the telescope was completed in 1979, it was called the Multiple-Mirror Telescope, as it was comprised of six smaller mirrors. The smaller mirrors were replaced by a single 6.5-meter mirror in 2000, but the name MMT was retained. (Photo: Howard Lester) 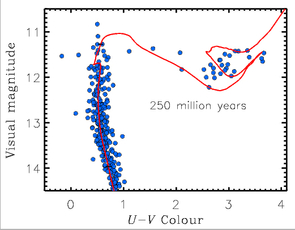 A plot comparing the brightness (on the y-axis) to the color (on the x-axis) of 250-million year-old stars in the Wild Duck Cluster. The blue dots indicate individual stars. The bluest stars are on the left side, and the reddest stars are on the right side. The red line indicates the path across this plot that stars take over the course of their lifetime. (Image: Beomdu Lim)

Do star clusters harbor many generations of stars or just one? Scientists have long searched for an answer and, thanks to the University of Arizona’s MMT telescope, found one in the Wild Duck Cluster, where stars spin at different speeds, disguising their common age.

In a partnership between the UA and the Korean Astronomy and Space Science Institute, a team of Korean and Belgian astronomers used UA instruments to solve a puzzle about flocks of stars called open clusters.

Astronomers have long believed that many open clusters consist of a single generation of stars because once stars have formed, their radiation blows away nearby material needed to make new stars. But in the Wild Duck Cluster – known by scientists as Messier 11, or M11 – stars of the same brightness appear in different colors, suggesting they are of different ages. Unless scientists had missed important clues about stellar evolution, there had to be another explanation for the spread of colors in this accumulation of about 2,900 stars.

Beomdu Lim of Kyung Hee University led an international team of astronomers who used the MMT telescope – jointly operated by the UA and the Smithsonian Astrophysical Observatory – to study the cluster. In a study published in Nature Astronomy, the team discovered that it is not the stars’ ages that cause them to appear in a spread of color: it is their rotation.

Open clusters contain thousands of stars that astronomers hypothesize formed from the same giant clouds of gas. These stars come in all sizes, from short-lived, giant blue stars dozens of times more massive than our sun, to long-lived low-mass dwarves that will burn for 10 billion years or longer. The brightness and color of each star changes as it grows older, allowing scientists to determine its age.

"As a star is getting older and older, it brightens and becomes redder," Lim said.

Astronomers plot young stars' brightness and color in a diagonal line – from bright, blue and massive at the top of the line, down to faint, red and less massive at the bottom – called the main sequence.

The turning point – the point at which a star ages and veers off the main sequence – is used to determine the age of clusters based on the known life expectancy of each star. If the stars leave the main sequence at the same point, like cars on a freeway taking the same exit, then the stars of the cluster are all the same age.

In the Wild Duck Cluster, however, the stars veer off the diagonal at different points, like cars taking different exits along a freeway.

"This does not seem intuitive, since the stars in an open cluster like M11 are thought to belong to the same generation," Kim said.

Lim and his team set out to discover what stellar properties could potentially explain this pattern.

They turned the MMT telescope toward the cluster to examine the color spectrum of the stars using an Hectochelle. The instrument acts like a prism and spreads starlight into its components, which astronomers call a spectrum. The spectra are like barcodes, with each line identifying a different chemical in the star’s makeup.

Hectochelle can capture detailed spectra of many stars at once, making it  an ideal instrument to observe clusters like the Wild Duck, which consist of thousands of stars.

"The effects of rotation on stellar evolution were often neglected in the past," said Yaël Nazé, an astronomer at the University of Liège in Belgium and co-author of the paper.

The spectra also revealed that the stars are spinning at different rates. Lim and his team performed computer simulations to find out how fast each star is rotating.

"A rapidly rotating star can remain in the main sequence stage longer than a slowly rotating star," Lim said. "A wide range of velocities of stars results in differences of lifetimes among the stars."

Rotational speed is like a fountain of youth to a star: The faster it spins, the better it mixes hydrogen – the star’s fuel – into its core. The more hydrogen the core receives, the longer the star lives, causing it to appear redder than younger siblings.

Stars in the cluster appear in different colors because the cloud they were born in set them into motion that would extend the lifetime for some of them.

Though not a part of the Wild Duck Cluster study, Kim has worked with Lim in the past to study other star clusters and uncover mysteries of star formation. Their collaborations are part of a growing partnership between the UA and the Korean Astronomy and Space Science Institute.

In addition to teaming up to use the MMT telescope, the UA and the Korean Astronomy and Space Science Institute are partners in the Giant Magellan Telescope Project; the UA’s Richard F. Caris Mirror Lab is manufacturing the world’s largest mirrors. For more information on the UA's involvement, visit: https://research.arizona.edu/learnmore/giant-magellan-telescope-gmt. For more information on Korean Astronomy and Space Science Institute’s involvement, visit the K-GMT Science Group online at kgmt.kasi.re.kr/kgmtscience.