UA meteorite curator Marvin Killgore has a 300-gram piece of the object that exploded over Wisconsin in April.
Jeff Harrison
,
University Communications
May 4, 2010
Resources for the Media
Extra Info:

The Wisconsin meteorite fragment will be on display along with several other samples of different kinds of meteorites. The exhibit is free and open to the public.

What:
Meteorite Exhibit
When:
June 12-13
Where:
Foothills Mall, Tucson 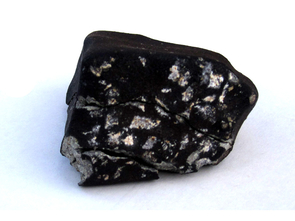 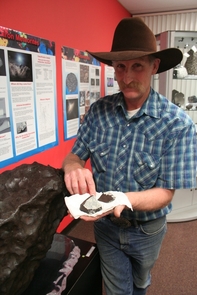 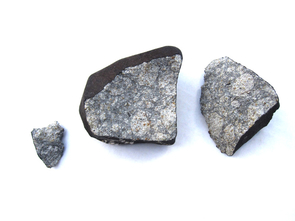 People in southwestern Wisconsin and northern Iowa on April 14 witnessed a sonic boom and a fireball that briefly – and spectacularly – lit up the late evening sky. It was the result of an ancient rock that ended its 4.5 billion year journey through the solar system in a ball of flames entering Earth's atmosphere.

NASA officials estimated that the rock, a meteoroid some 3.3 feet across, blew apart with the force equivalent to 20 tons of TNT. Videos of it are widely available on the Internet.

And it also set off what one meteorite hunter called "the ultimate Easter egg hunt."

Marvin Killgore, the curator of meteorites for the Lunar and Planetary Laboratory at the University of Arizona, and his wife, Kitty, were among the first of a phalanx of meteorite hunters from around the world to arrive in Mineral Point, Wisc., just days after the sighting.

To date, the Killgores have what may be the largest fragment of the meteorite, a pristine chunk of space rock weighing about 300 grams, although Marvin Killgore said rumors of a larger meteorite are circulating.

The Killgores work with NASA Jet Propulsion Laboratory scientist Marc Fries on locating meteorites. They use Doppler weather radar sites on the Internet to triangulate the trajectory of objects heading through the atmosphere to the ground. Much like atmospheric clouds, exploding meteoroids create clouds of debris that are picked up as radar signatures and form a "strewn field," the zone that encompasses the area where pieces of the meteorite land.

This particular object was a breccia, a conglomerate of rocks embedded in a fine-grained rock matrix. It most likely came from the asteroid belt orbiting the Sun between Mars and Jupiter.

Killgore estimated the rock first detonated at 30 kilometers – about 18 miles above the Earth's surface – with the first radar signature occurring at about 30,000 feet, sending a two-mile wide,14-mile-long shower of fragments into the Wisconsin countryside.

The Killgores, along with their daughter and son-in-law, Laura and Mick Center, drove straight through from Arizona to Wisconsin almost as soon as they heard about it.

They were not alone. Marvin Killgore said there were about 100 other meteorite hunters in Mineral Point the day they arrived, combing through the freshly plowed fields, grass-lined fences and roadways for a prize.

Mineral Point, a farm community midway between Madison and Dubuque, Iowa, had become Ground Zero for the meteorite fall.

"The pieces can fall anywhere," Killgore said. "It's basically like tossing a handful of gravel into the grass and then see if you can find them."

Finding them generally involves a lot of walking.

"We have a metal detector, but there is so much metallic farm debris in the fields from tractors and other equipment that we just use our eyes and magnets," said Kitty Killgore. The magnets are attached to walking sticks that aid in finding meteorites made of iron or are high in iron content.

The Killgores found their meteorite on a road near a local candle factory. It had split into three pieces on impact, stamped with an impression from the gravel on the road where it hit.

A sample from the meteorite found by a local farmer was sent to the University of Wisconsin and found to contain traces of magnesium, iron and silica compounds, as well as other common minerals like olivine and pyroxene. It also contained iron-nickel metal and iron sulfide, minerals typically found in primitive meteorites discovered on Earth.

Some meteorites are valuable enough to fetch several thousand dollars on the market – part of the reason, Killgore said, why the number of meteorite hunters has grown dramatically in recent years as technology has made them easier to find.

Easier but with no guarantees. He said many people will spend one or two thousand dollars and a couple of weeks at a site and come away empty-handed. A few will spend upwards of $50,000 at a potentially rich site with hopes of recouping their expenses and making a profit.

Marvin and Kitty Killgore themselves have, over the last 20 years, amassed one of the largest collections of meteorites in the world, more than six tons. The largest weighs nearly 1,600 pounds. Their goal is to keep the collection intact and in Arizona to be used for scientific investigation and public exhibits.

One exhibit is scheduled for June 12-13 at the Foothills Mall in Tucson. The Wisconsin meteorite will be on display there along with some major iron and stony-iron pieces.

Marvin Killgore said there most likely are larger fragments from the Wisconsin meteor than the one he found, and pieces of it will show up for years to come. But over time those fragments will have weathered, he said.

"This one is relatively pristine, handled by very few human hands," he said. "And it hasn't been on Earth all that long. It's exciting to be the first one to see something like this, to pick it up and hold it in your hand, and to know that it just came from somewhere away from here. It's pretty awesome."