McCall has donated a collection worth millions to help establish an archive at the museum.
Johnny Cruz
March 5, 2008
Resources for the Media
Extra Info:

What:
Opening of Robert McCall Exhibit
When:
March 6, 4:30 p.m.
Where:
UA Museum of Art, Park Avenue and Speedway Boulevard 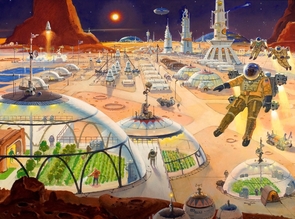 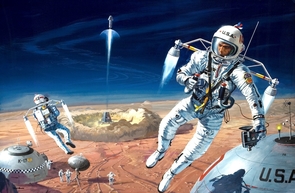 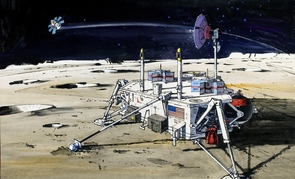 The University of Arizona Museum of Art presents “Robert McCall: Imagination Unbound,” an exhibition of paintings, drawings and prints by the noted artist and illustrator. The exhibition, opening tomorrow, coincides with the UA-led Phoenix Mars Mission, and will be on view when the lander reaches Mars on May 25.

UAMA will host a talk by the artist at 4:30 p.m. tomorrow, followed by an opening reception from 5-6:30 pm. Admission is free and the event is open to the public.

For more than 60 years, McCall has chronicled the history of aviation, science and space flight and shared his vision through museums, magazines, motion pictures and books. His 35-year relationship with NASA has given Americans a view of its presence in space in ways never before imagined.

While the UA makes history as its Phoenix Mars Lander speeds toward its landing on the Red Planet, McCall’s art asks people to consider their destiny in space through his observations and projections of the past, present and future.

McCall’s collection of works includes illustrations of America’s finest moments in space technology – from the inaugural manned space flight to the first steps taken on the moon. His visionary artwork invokes the thrilling sense of man’s ability to reach frontiers beyond the imagination, for McCall does not merely depict space, but rather man in space.

Born in Columbus, Ohio, in 1919, McCall has always been enthralled with space and exploration.

This initiated an intrigue with science and technology and, later, a career in depicting America’s feats in the U.S. space program.

In addition to being a visual historian for NASA, McCall has served as a conceptual artist for the entertainment industry. McCall was the art director on Disney’s science fiction adventure “The Black Hole” as well as “Star Trek: The Motion Picture.” One of his most well-known commercial pieces is his painting for the poster art for the classic motion picture “2001: A Space Odyssey.”

A number of his murals are on display at Disney’s EPCOT Center in Florida. His work has also been displayed at NASA’s Johnson Space Center, the Pentagon and numerous museums and galleries around the world.

More than 10 million people a year admire his massive six-story-high mural at the National Air and Space Museum in Washington, D.C. He also has created stamps for the U.S. Postal Service that commemorate the American space program.

In 2007, McCall announced that he was donating more than 200 original pieces to UAMA.

The collection, which includes personal archives and notes, has an estimated value of $2.5 million to $3 million, according to McCall. The work is the lead gift to establish the Archive of Visual Arts, or AVA, at the UAMA.

The AVA will collect artists’ papers and materials – including diaries, correspondence, financial documents and personal items – to support the study of creativity and to facilitate research in numerous disciplines.

McCall is a longtime supporter of the UA’s efforts in space exploration, serving on the University’s astronomy board. McCall pieces have been on display at various UA locations for years, including the Large Binocular Telescope on Mt. Graham in southeastern Arizona and Steward Observatory on the UA’s Tucson campus.