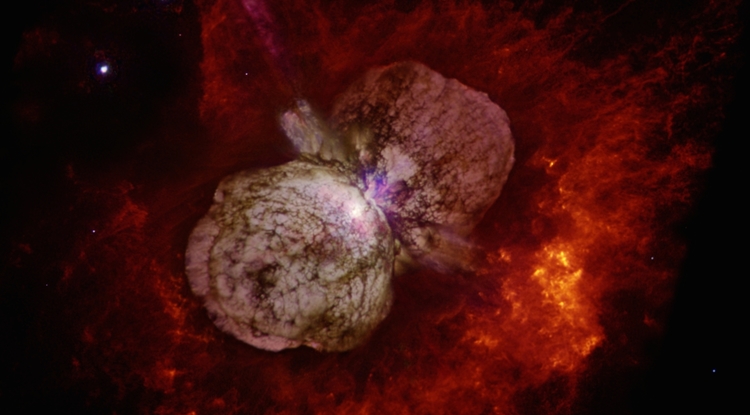 Astronomers Uncover Clues to the Star that Wouldn't Die

Data obtained by a clever technique that can detect light echoes hint at why Eta Carinae, the most luminous and massive star in the Milky Way, erupted like a supernova, yet survived.
Space Telescope Science Institute/University Communications
Aug. 3, 2018
Resources for the Media
Extra Info:

Owners of a 3D printer can download the code to print a 3D model of Eta Carinae’s Homunculus nebula (the result of the giant blow-up in 1843): https://github.com/nasa/NASA-3D-Resources/tree/master/3D%20Printing/Eta%20Carinae%20Homunculus%20Nebula

Those who don’t have access to a 3D printer can buy a model: https://www.shapeways.com/product/MDGAS5GX9/homunculus-nebula-20mm-long

What happens when a star behaves like it exploded, but it’s still there? About 170 years ago, astronomers witnessed a major outburst by Eta Carinae, the brightest known star in our Milky Way galaxy. The blast unleashed almost as much energy as a standard supernova explosion.

An explanation for the eruption has eluded astrophysicists. They can’t take a time machine back to the mid-1800s to observe the outburst with modern technology. However, astronomers can use nature’s own “time machine,” courtesy of the fact that light travels at a finite speed through space. Rather than heading straight toward Earth, some of the light from the outburst rebounded or “echoed” off of interstellar dust, and is just now arriving at Earth. This effect is called a light echo. The light is behaving like a postcard that got lost in the mail and is only arriving 170 years later.

By performing modern astronomical forensics of the reflected light from the blast, researchers have concluded that the 1840s eruption may have been triggered by a prolonged stellar brawl among three rowdy sibling stars.

This tussle may have culminated with a violent explosion when Eta Carinae devoured one of its companions, rocketing more than 10 times the mass of our Sun into space. This ejected mass created two gigantic bipolar lobes resembling a dumbbell shape that is seen in present-day images.The surprise is that new measurements of the 19th century eruption reveal material expanding with record-breaking speeds of up to 20 times faster than astronomers had expected. The observed speeds are more like the fastest material ejected by the blast wave in a supernova explosion, rather than the relatively slow and gentle winds expected from massive stars before they die.

The results are reported in a pair of papers by a team led by Nathan Smith of the University of Arizona's Steward Observatory and Armin Rest of the Space Telescope Science Institute in Baltimore, Maryland. "Exceptionally fast ejecta seen in light echoes of Eta Carinae’s Great Eruption" was published first, followed by "Light-echoes from the plateau in Eta Carinae’s Great Eruption reveal a two-stage shock-powered event." Both were published in Monthly Notices of the Royal Astronomical Society.

The light echoes were detected in visible-light images obtained since 2003 with moderate-sized telescopes at the Cerro Tololo Inter-American Observatory in Chile. Using larger telescopes at the Magellan Observatory and the Gemini South Observatory, both located in Chile, the team then used spectroscopy to dissect the light, allowing them to measure the ejecta’s expansion speeds. They clocked material zipping along at more than 20 million miles per hour — fast enough to travel from Earth to Pluto in a few days.

The observations offer new clues to the mystery surrounding the titanic convulsion that made Eta Carinae the second-brightest nighttime star in the sky, as seen between 1837 and 1858. The new data hint at how it may have come to be the most luminous and massive star in the Milky Way galaxy.

"We see these really high velocities in a star that seems to have had a powerful explosion, but somehow the star survived," Smith explained. "The easiest way to do this is with a shock wave that exits the star and accelerates material to very high speeds."

Massive stars normally meet their final demise in shock-driven events when their cores collapse to make a neutron star or black hole. Astronomers see this phenomenon in supernova explosions where the star is obliterated. So how do you have a star explode with a shock-driven event but not have it completely blow itself apart? Some violent event must have dumped the right amount of energy onto the star. The energy was too much for the star to hold onto and it ejected its outer layers.

One possibility for just such an event is a merger between two stars, but it has been hard to find a scenario that could work and match all the data on Eta Carinae. The researchers suggest that the most straightforward way to explain a wide range of observed facts surrounding the eruption is with an interaction of three stars, where the objects have exchanged mass.

If that’s the case, then the present-day binary system must have started out as a triple system.

"If we merged two stars and we’re left with two, there must have been three to begin with," Smith said. "The reason why we have this crazy triple system that interacts is because we need an explanation for how the present-day companion quickly lost its outer layers before its more massive sibling."

In the team’s proposed scenario, two hefty stars are orbiting closely and a third companion is orbiting farther away. When the most massive of the close binary stars nears the end of its life, it begins to expand and dumps most of its material onto its slightly smaller sibling.

The sibling has now bulked up to about 100 times the mass of our Sun and is extremely bright. The donor star has been stripped of its hydrogen layers, exposing its hot helium core. Hot helium core stars are known to represent an advanced stage of evolution in the lives of massive stars.

"From stellar evolution, there’s a pretty firm understanding that more massive stars live their lives more quickly and less massive stars have longer lifetimes," Rest explained. "So the hot companion star seems to be further along in its evolution, even though it’s a much less massive star than the one it is orbiting. That doesn’t make sense without a transfer of mass."

The mass transfer also alters the gravitational balance of the system, and the helium-core star moves farther away from its monster sibling. As a consequence of this widening separation, the helium-core star interacts gravitationally with the outermost star, pulling it into the fray. The two stars trade places, and the outermost star gets kicked inward. It makes a few close passes, interacting with its heavyweight partner before the two stars merge. That merger process involves a spiraling-in phase that lasts many decades, during which time the two stars may have been inside a bloated common envelope or cocoon of mass around the merging system.

In the outburst’s initial stages, the ejecta was dense and expanding relatively slowly as the two stars spiraled closer and closer. Later, an explosive event occurred when the two inner stars finally merged together, blasting off material moving 100 times faster. This material eventually caught up with the slow ejecta and rammed into it like a snowplow, heating the material and making it glow. This glowing material was the light source of the main historical eruption seen by astronomers a century and a half ago.

Meanwhile, the surviving companion settles into an elongated orbit around the merged monster star, leaving the binary system that is seen today. Astronomers cannot clearly see the companion because it is lost in the glare of its much brighter partner. However, they can detect the companion’s presence every 5.5 years when it passes through the giant star’s outer envelope, producing shock waves that are detected in X-rays. A better understanding of the physics of Eta Carinae’s eruption may help to shed light on the complicated interactions of binary and multiple stars, which are critical for understanding the evolution and death of massive stars.

The Eta Carinae system resides 7,500 light-years away inside the Carina nebula, a vast star-forming region seen in the southern sky. The team’s findings will be published in two papers in The Monthly Notices of the Royal Astronomical Society.

The Hubble Space Telescope is a project of international cooperation between NASA and the European Space Agency. NASA's Goddard Space Flight Center in Greenbelt, Maryland, manages the telescope. The Space Telescope Science Institute (STScI) in Baltimore, Maryland, conducts Hubble science operations. STScI is operated for NASA by the Association of Universities for Research in Astronomy in Washington, D.C.