The Burly Sperm Catches the Worm 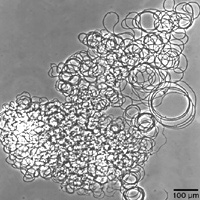 This is a single giant sperm from Drosophila bifurca. (Photo: Scott Pitnick) 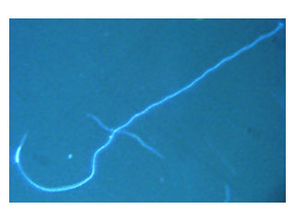 Scanning electron micrograph of a C. elegans sperm. The knobby part at the right is the pseudopod, which is used for crawling. (Photo: Craig LaMunyon)

For tiny soil nematodes, big sperm have the edge over smaller sperm in fertilizing a mate's eggs, according to University of Arizona biologists Craig LaMunyon and Samuel Ward. In a paper published in the June 7 2002 Proceedings of the Royal Society, the pair reported that the incessant drive in the race toward a hereditary legacy leads male worms to evolve larger sperm. While this may not seem so newsworthy to anybody but a worm, the real scoop is that these researchers witnessed this evolution directly, in a Petri dish.

The Seventh Commandment notwithstanding, competition among sperm from different suitors runs rampant in the animal kingdom. "It occurs in nearly every species, even birds, the paragons of monogamy," says LaMunyon, now an assistant professor of biology at Florida Atlantic University.

LaMunyon started investigating sperm competition in nematodes as a postdoctoral fellow in Ward's lab in the UA department of molecular and cellular biology. Caenorhabditis elegans, the millimeter long transparent nematode that Ward has studied for thirty years, is a favorite model organism for studying developmental biology. It turns out to be ideal for learning about sperm competition also.

Like earthworms, their more familiar distant cousins, most C. elegans individuals are hermaphroditesthey have both male and female reproductive systems. But C. elegans hermaphrodites can't mate with each other. Most of the time, a hermaphrodite fertilizes its eggs with its own sperm. But there are also a few males lurking among C. elegans populations. A male's raison d'etre is mating with a hermaphrodite, passing along its genes for posterity.

Ward discovered years ago that when a male mates with a hermaphrodite, just about all of the male's sperm will displace the hermaphrodite's own sperm, fertilizing every egg and leaving the hermaphrodite's sperm out in the cold. When LaMunyon joined Ward's lab he set out to find the source behind such competitive prowess. He systematically testedand eliminatedmany possibilities. Then, by simply looking at sperm from males and hermaphrodites side by side under a microscope, he found that the males' sperm were larger than the hermaphrodites'. "It was one of those rare and exhilarating moments when you hit upon something that appears to explain a puzzling phenomenon," LaMunyon recalled of the discovery. Upon closer examination, he discovered that larger sperm crawl faster than smaller sperm (yes, these sperm crawl rather than swim), and do indeed have the competitive edge in the fertilization race.

Armed with this result, LaMunyon predicted that nematode species in which males face heated sperm competition should evolve larger sperm than species with less intense competition. He tested this by comparing the size of sperm from the males of predominantly hermaphroditic worms, like C. elegans, to species with the more conventional male-female lifestyle. In male-female species, females usually mate with many males. Males of those species ought to have beefier sperm. LaMunyon sampled sperm (don't ask) from nineteen different species, took them back to his microscope, and found that, indeed, sperm from the male-female species were all significantly larger than sperm from the hermaphroditic species.

Scientists, however, are quick to admonishtempting as it may be to take the leap that correlation does not necessarily mean cause. To conclude that sperm competition causes sperm to evolve larger would take some carefully controlled experimentation, an almost impossible task when dealing with a process that plods along atliterallyevolutionary pace.

LaMunyon gave it a try anyway. He designed the type of experiment that evolutionary biologists usually don't have the luxury to even dream of doing: changing the one variable in question, while keeping everything else the same. Here again, C. elegans proved to be a perfect experimental system. With a generation-to-generation span of only three days, evolution can work quickly in these worms. Using some genetics tools and tricks developed in the Ward lab, he created two varieties of worms that were identical in every way except one. One strain reproduced by way of self-fertilizing hermaphrodites, with only rare males; there was practically no competition between sperm from different males. The other strain however, could only reproduce through mating between males and females, and the high proportion of males in the population insured that sperm competition was fierce.

LaMunyon cultivated the two worm colonies side by side, but segregated in their own Petri dishes. He grew them for six months--sixty generations, measuring sperm from males every fifteen generations. The sperm from the hermaphroditic colony, where there was no sperm competition, remained the same size throughout the experiment. But, just as predicted, the sperm from the worms reproducing by male-female matings steadily became larger. By generation sixty they had grown twenty percent larger than their ancestors' sperm at the start of the experiment.

So, if bigger is better, will this evolutionary contest inevitably lead to giant sperm? Unlikely, according to LaMunyon. "While bigger sperm are better, it takes more time and energy to make them," he says. But he adds that this intense evolutionary pressure on sperm to stand out among the crowd has produced an amazing diversity of sperm shapes and sizes.