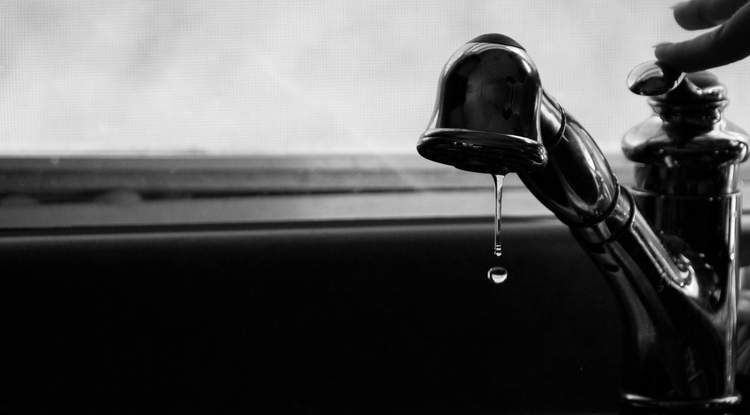 Cape Town's Water Crisis: Could It Happen in Arizona?

Water is everyone's business, and the business of water affects everyone. The conference will explore the complex and dynamic issues that are vital to our water future. Admission is $125, with a special student rate of $45. For information, visit https://wrrc.arizona.edu/conferences/2018. 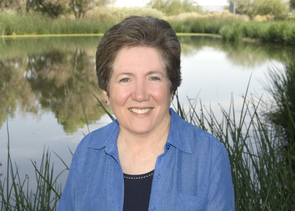 Sharon Megdal says she has been "immersed in water" since becoming director of the UA's Water Resources Research Center in 2002. 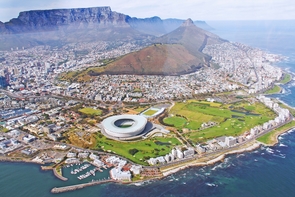 Cape Town's water supply is dependent on surface water, which is in short supply due to a multiyear drought.

Events such as the Water Resources Research Center annual conference draw top industry speakers, as well as interested spectators from the UA and Tucson communities. (Photo: Lynn Ketchum/College of Agriculture and Life Sciences) 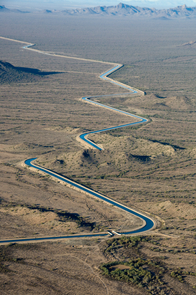 The Central Arizona Project supplies water from the Colorado River to central Arizona and is part of the state's diversified water portfolio. (Photo courtesy of CAP) 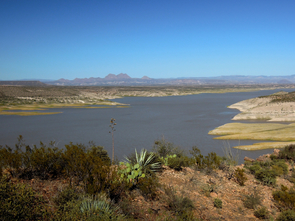 The U.S. Department of the Interior's Bureau of Reclamation studies reservoirs such as the San Carlos Reservoir, as part of its mission to manage, develop and protect water and related resources in an environmentally and economically sound manner. (Photo: Annalise Boyer) 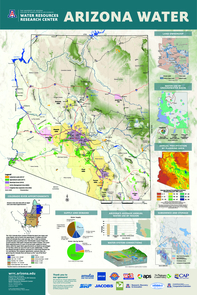 The WRRC's Arizona Water Map Poster offers a reliable and concise visual representation of Arizona's water resources. The map reflects the current state of water resources in Arizona, as well as a culture of management and planning unique to the state. It can be purchased online at https://wrrc.arizona.edu/arizona-water-map-form. 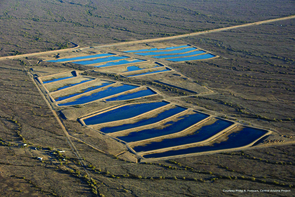 Water banking projects such as the Tonopah Desert Recharge Project offer a measure of protection for Arizona's water supply. (Photo courtesy of CAP)

Cape Town, South Africa, has been in the news lately as officials desperately try to keep it from becoming the first modern city to run out of water. Water supplies are being closely monitored to estimate "Day Zero," the day they will turn off the municipal taps. It could happen as soon as July 15.

All of Cape Town's 4 million residents are feeling the effects of a severe water shortage. Each person is asked to use just 13.2 gallons of water per day. (In comparison, the average American uses 80-100 gallons of water a day, according to the U.S. Geological Survey.) Should Day Zero become a reality, Cape Town residents will stand in line for a daily allotment of just 6.6 gallons each.

If the water restrictions seem drastic, it's because Cape Town's situation is. A record three-year drought already has depleted the city's water supply to 25 percent of capacity. At 13.5 percent, Day Zero will be declared.

If a city such as Cape Town, with a sprawling coastline on the Atlantic Ocean, can run out of water, what are the chances it could happen in Arizona, the only U.S. state where parts of all four North American deserts can be found? Many Arizonans are well-versed on water conservation, but is it enough?

Could Tucson or Phoenix be the next Cape Town?

Sharon Megdal, director of the UA Water Resources Research Center, a Cooperative Extension and research unit in the College of Agriculture and Life Sciences, tackles the question by looking at the past, present and future of Arizona's water situation.

While Cape Town is the most recent city to face an imminent water crisis, it is not the first.

At one point in 2007, Atlanta's reservoirs held less than a 90-day supply of water. In 2010, Los Angeles was identified by experts as the U.S. city most likely to run out of water; in 2015, California Gov. Jerry Brown announced the state's first mandatory water restrictions. In each case, the cause was different but the results were the same — a lack of fresh water.

Fresh water comes primarily from surface water (rivers, streams, creeks, lakes and reservoirs) and groundwater, which must be pumped from below the surface of the earth.

"The problem with areas like Cape Town is they rely on surface water and surface water reservoirs," said Megdal, who is the C.W. & Modene Neely Endowed Professor and UA Distinguished Outreach Professor. "If there's a drought and there's not the expected feed to the surface water, reservoirs can run dry, and that's what's happening in different places in the world."

It's what happened in Atlanta, where the water level at Lake Lanier, a 38,000-acre reservoir that supplies more than 3 million residents with water, hit record lows. Atlanta, with its complete reliance on surface water, had nowhere else to turn. It got lucky: Winter rains helped restock the reservoirs and the major drought that hit the Southeast in 2007-2008 was relatively short-lived. The near-catastrophe started the conversation about finding alternative sources of water, although an effective solution has yet to be implemented.

In contrast to Cape Town and Atlanta, which rely on surface water, as recently as 1993 Tucson was the largest city in the U.S. — and perhaps globally — to be 100 percent dependent on groundwater. While the source is different, the shortcomings of a lack of diversification are the same.

"Groundwater is, by and large, fossil groundwater," Megdal said. "It's been there for eons, and if we pull it out, it's going to take eons for nature to replenish it. The fact of the matter is, we were taking out too much groundwater. We were using it faster than nature replenishes it."

Megdal says a diversified water portfolio — one that makes use of multiple water sources ­— offers protection against events that can greatly affect singular water resources, such as droughts that reduce the availability of surface water.

"One lesson from Cape Town is they're looking at themselves and saying, 'Do we do enough to diversify our water supply portfolio?'" said Megdal, who is lead editor of the book, "Shared Borders, Shared Waters: Israeli-Palestinian and Colorado River Basin Water Challenges."

"That's really what you have to think about: Are there things you can do to have a more diversified water source that you can at least draw upon in these emergencies?"

Tucson, and Arizona as a whole, has benefited from forward-thinking water managers and work such as that being done at the UA.

"The University of Arizona is extremely strong in its water research, from the watershed landscape perspective, from the groundwater perspective and from the use of water perspective, especially by agriculture," Megdal said of the UA, which is ranked No. 3 in water resources by the Academic Ranking of World Universities. "We're a land-grant institution, so we have an important role. We have been part of the water discussion and water research, water education and water outreach, for as long as we've been here and as long as water has been used."

Arizona legislators put groundwater regulations in place in 1980, with the Groundwater Management Act, and the massive task of diversifying the state's water portfolio was started. The result is a sustainable water plan that doesn't leave the state's large metropolitan areas dependent on a single source of fresh water.

Statewide, approximately 40 percent of Arizona's water supply comes from groundwater and 40 percent from the Colorado River. Reclaimed water makes up about 4 percent of the state's water resources, with the rest coming from other surface water supplies. While specific water resources vary in different parts of the state — some areas still are 100 percent dependent on groundwater, for example — overall, Arizona's water portfolio has been developed to ensure that water always will be available to consumers.

Water from the Colorado River, which represents the state's largest renewable water supply, reaches interior Arizona via the Central Arizona Project, a 336-mile system of aqueducts, tunnels, pumping plants and pipelines. Construction began at Lake Havasu in 1973 and was completed 20 years later at the southern boundary of the San Xavier Indian Reservation southwest of Tucson, ending the city's reliance on groundwater.

"We moved from being a very groundwater-reliant system to one that relies a lot on Colorado River water delivered through the CAP," Megdal said. "We have been preserving, as best we can, the groundwater that we have for times of shortage or drought. So we have an insurance policy, in a sense, and I think that distinguishes us quite a lot from a Cape Town."

No matter the source, however, there is no guarantee the water always will be there. Long-term drought already has reduced the amount of water flowing in the Colorado River Basin, a seven-state system that extends into Mexico.

"The headwaters are up in Wyoming and Colorado, so our wet water depends upon what's happening with snowpack and temperatures north of here," Megdal related. "Right now, we've had a very dry, warm winter. I think the snow is about 25 percent of average in the northern parts of the basin, so we have a problem."

Water managers already are talking about what could happen if the current drought continues for 10-15 years and turns into what some are calling a "megadrought." Nationally, lake levels are being tracked by the U.S. Department of the Interior's Bureau of Reclamation, which creates 24-month models to predict future water availability. In Arizona, the Arizona Water Banking Authority stores unused Colorado River water in existing aquifers to make it available in times of shortage. Future solutions, such as desalination of seawater or brackish groundwater, and use of treated wastewater, also are being explored.

Megdal, who serves on the boards of several state, national and international water organizations, believes that if a water shortage were to be declared, Arizona residents and communities would answer the call for more conscientious water usage.

"I think on an overall basis, there's a lot we've done and there's a lot we still could do to prepare for a potential water shortage and then weather it," Megdal said. "The University of Arizona is working on just about any significant question you could think of relating to water supply, water quality, technology for using water, particularly by agriculture. Collectively, we want to be seen as a resource. We want to be seen as a provider of sound, independently generated information so that people can, and they do, come to us collectively with their questions about water.

"I don't see us like a Cape Town. I think we have a lot of options, because we live in a desert, we're aware of it and we don't have a single-source supply. Do I want to suggest that we shouldn't be conscious of and aware of and think about our water? No. I want people to be educated and informed, but not alarmed. I think we're different, but we can never be complacent about our water supplies."

Listen to Sharon Megdal talk about the public's role in water management in a clip from the award-winning, UA-produced documentary Beyond the Mirage.