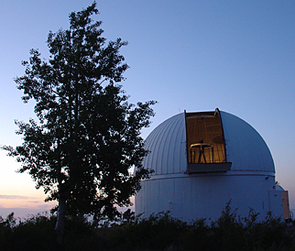 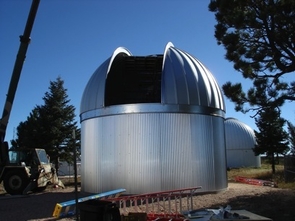 The Catalina Sky Survey is adding a new 1-meter, or 40-inch, telescope that will be used to follow-up NEO sitings. The telescope will be housed in this 22-foot dome built at Steward Observatory's Mount Lemmon site and should become operational this summer. 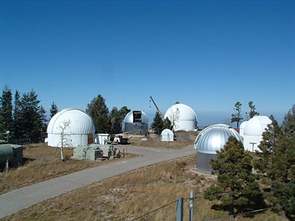 The University of Arizona's Catalina Sky Survey has been awarded a $3.16 million NASA grant to continue its search for near-Earth objects, or NEOs, through 2012.

Under the direction of Stephen M. Larson of the UA's Lunar and Planetary Laboratory, the survey, known as CSS, has discovered about 70 percent of all NEOs found in the past three years.

Thanks to an additional $250,000 NASA grant, which was matched by private donations, the survey is now positioning itself to become even more productive.

CSS is about to open a new high-speed communications link and begin operating another telescope, a 1-meter, or 40-inch, telescope that is being refurbished with a new mirror and new software. It will be housed in a new 22-foot dome that was constructed next to the UA's 1.5 meter, or 60-inch, Mount Lemmon telescope north of Tucson.

The telescope, which will be operational this summer, will be used to quickly follow up NEO discoveries, increasing the team's surveying time on other telescopes by 20 to 25 percent.

CSS will hire undergraduate students as follow-up coordinators, Beshore added. Students will be able to access the previous night's observing data from their desks on campus the following morning, thanks to the improved communications link to the mountain observatory.

Beshore has been working to install a microwave broadband link that will connect Mount Lemmon to Mount Bigelow, and Mount Bigelow to the roof of Steward Observatory on campus 22 miles away.

The CSS team takes about 20 gigabytes of data with each one of its telescopes per night. Increasing Internet throughput by a factor of 50 will not only permit CSS to move their data to campus more easily, but also provide improved access to the Internet for all researchers using telescopes in the Santa Catalina Mountains.

CSS is the only NEO survey that covers both Northern and Southern hemispheres.

NASA began funding the Catalina Sky Survey in 1998 as part of the 10-year, congressionally mandated national Spaceguard program to detect, track, catalog and characterize potentially hazardous asteroids and comets that could approach the Earth.

The goal has been to locate at least 90 percent of Earth-approaching objects at or larger than one kilometer in diameter, or about two-thirds of a mile, by the end of the decade.

"We're about 85 percent there," Larson said.

Objects one-third kilometer in diameter, or roughly 1,000 feet across, would explode with 24 times the energy of the world's largest thermonuclear bomb explosion, a 58-megaton Soviet bomb exploded in 1961, in an impact with Earth.

In 2005, Congress further mandated NASA to identify and assess potentially hazardous near-Earth asteroids and comets 140 meters in diameter, or 500 feet across. Earth impacts by 140-meter objects occur only once every several thousand years, Larson said, but they would be powerful enough to wipe out cities.

"A key point of our survey is that we do nearly real-time analysis of the objects which we think may be NEOs," Larson said. That being the case, "We can get more observations per night, extend the object's observed orbital arc to better establish whether it is a near-Earth object, then alert others to get more follow-up observations."

The CSS team proved the power of their technique early last October, when CSS observer Richard Kowalski on Mount Lemmon discovered Asteroid 2008 TC3, an object only about 6 feet across that entered Earth's atmosphere and disintegrated over Sudan.

Such small impact events occur several times a year around the globe. But this is the first time scientists discovered an asteroid before it reached Earth and predicted when and where the impact would be.

CSS immediately alerted scientists at the Minor Planet Center in Cambridge, Mass., and NASA's Near Earth Object Program in Pasadena, Calif., who were able to calculate the asteroid would hit Earth's atmosphere over the Sudan 19 hours after Kowalski spotted it.

"There's a bit of a misperception that what we do is find objects that are incoming, like the Sudan object," Larson said. "That's not the case."

"We're hoping to find objects that many orbits down the road might be hazardous, so that we have enough time to do something about them," he said. "We can calculate orbits quite accurately. We hope that we would have a few decades to study and characterize these things, and come up with the best plans to nudge them into another orbit so that it misses the Earth."

As of January 2, 2009, according to scientists with NASA's Near Earth Object Program, observers had discovered 5,955 NEOS, including 763 asteroids at least 1 kilometer in diameter.

So far, 1,008 NEOs larger than 140 meters have been found that come within 4.5 million miles of the Earth's orbit and are thus classified as potentially hazardous objects because they may be perturbed into impacting trajectories in the future.