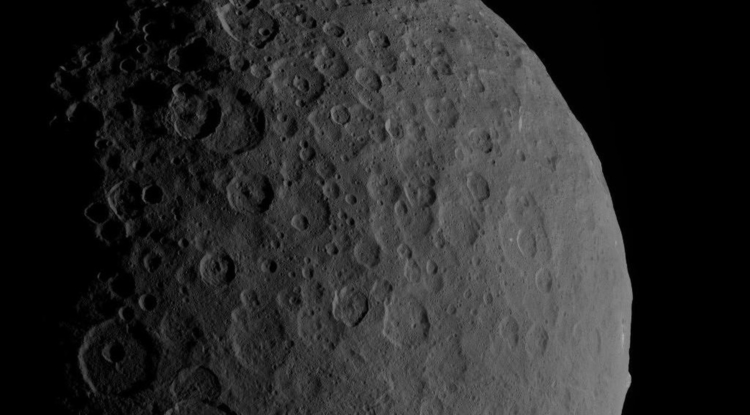 Ceres is a dwarf planet that orbits the sun between Mars and Jupiter. In this image, Ahuna Mons can be seen in the bottom right of Ceres's profile. (Photo: NASA/JPL/Caltech/UCLA/MPS/DLR/IDA)

Ceres Takes Life an Ice Volcano at a Time

In a new study by University of Arizona planetary scientists, observations prove that ice volcanoes on the dwarf planet Ceres generate enough material to fill one movie theater each year.
Emily Walla
,
NASA Intern/University Communications
Sept. 14, 2018
Resources for the Media 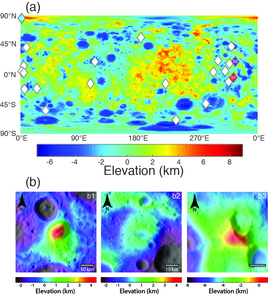 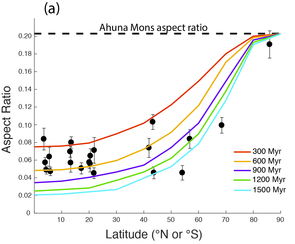 Each curve represents a cryovolcano of a different age and shows that mountains at low latitudes close to the equator flatten out at younger ages than mountains located at high latitudes at the poles, where they will maintain their height and width for eons. (Image: Michael Sori)

Every year throughout its 4.5-billion-year life, ice volcanoes on the dwarf planet Ceres generate enough material on average to fill a movie theater, according to a new study led by the University of Arizona.

The study, led by UA planetary scientist Michael Sori, marks the first time a rate of cryovolcanic activity has been calculated from observations, and its findings help solve a mystery about Ceres’s missing mountains.

Discovered 2015 by NASA’s Dawn spacecraft, the 3-mile-tall ice volcano Ahuna Mons rises in solitude over the surface of Ceres. Still geologically young, the mountain is at most 200 million years old, meaning that – though it is no longer erupting – it was active in the recent past.

Ahuna Mons' youth and loneliness presented a mystery. It seemed unlikely Ceres had lain dormant for eons and suddenly erupted in one place. But if other ice volcanoes had risen out of the Cerean surface in ages past, where are those volcanoes now? Why is Ahuna Mons so alone?

Sori and his co-authors, including fellow UA scientist Ali Bramson and professor of planetary science Shane Byrne, sought to answer these questions.

In a paper published last year, they theorized that evidence of older volcanoes on the dwarf planet had been erased over time by a natural process called "viscous relaxation." Viscous materials, like honey or putty, can begin as a thick blob, but the weight of the blob causes it to ooze into a flatter shape over time.

"Rocks don’t do that under normal temperatures and timescales, but ice does," Sori said.

Because Ceres is made of both rock and ice, Sori pursued the theory that formations on the dwarf planet flow and move under their own weight, similar to how glaciers move on Earth. The formations' composition and temperature would affect how quickly they relax into the surrounding landscape. The more ice in a formation, the faster it flows; the lower the temperature, the slower it flows.

Though Ceres never grows warmer than -30 degrees Fahrenheit, the temperature varies across its surface.

Computer simulations showed that Sori's theory was viable. Model cryovolcanoes at the poles of Ceres remained frozen in place for eternity. At other latitudes on the dwarf planet, model volcanoes began life tall and steep, but grew shorter, wider and more rounded as time passed.

To prove the computer simulations had played out in reality, Sori scoured topographic observations from the Dawn spacecraft, which has been orbiting Ceres since 2015, to find landforms that matched the models.

Across the 1 million square miles of Cerean surface, Sori and his team found 22 mountains including Ahuna Mons that looked exactly like the simulation’s predictions.

"The really exciting part that made us think this might be real is that we found only one mountain at the pole," Sori said.

Though it is old and battered by impacts, the polar mountain, dubbed Yamor Mons, has the same overall shape as Ahuna Mons. It is five times wider than it is tall, giving it an aspect ratio of 0.2. Mountains found elsewhere on Ceres have lower aspect ratios, just as the models predicted: they are much wider than they are tall.

By matching the real mountains to the model mountains, Sori was able to determine the age of many of them. The volume of the volcanoes was estimated by studying their topography, and by combining age and volume, Sori’s team was able to calculate the rate at which cryovolcanoes form on Ceres.

"We found that one volcano forms every 50 million years," Sori said.

This amounts to an average of more than 13,000 cubic yards of cryovolcanic material each year – enough to fill a movie theater or four Olympic-sized swimming pools. This is much less volcanic activity than what is seen on Earth, where rocky volcanoes generate more than 1 billion cubic yards of material in a year.

In addition to being less productive, volcanic eruptions on Ceres are tamer than those on Earth. Instead of explosive eruptions, cryovolcanoes create the icy equivalent of a lava dome: the cryomagma – a salty mix of rocks, ice and other volatiles such as ammonia – oozes out of the volcano and freezes on the surface. Most of the once-mighty cryovolcanoes on Ceres likely formed this way before they relaxed away.

The causes of cryovolcanic eruptions on Ceres are still a mystery, but future research might yield answers, as signs of ice volcanoes have been spotted on other bodies in the solar system as probes have flown by. Ceres is the first cryovolcanic body a mission has orbited, but Europa and Enceladus, moons of Jupiter and Saturn, are likely candidates for cryovolcanism, as are Pluto and its moon Charon. Europa is of special interest because it is believed to have liquid oceans trapped below a thick icy shell, which some scientists believe to be dotted with ice volcanoes.

"There might be similarities between Europa and Ceres, but we need to send the next mission there before we can say for sure," Sori said.

As scientists explore other potentially cryovolcanic bodies in the solar system, it will be fun, Sori said, to see how Ceres compares.

The paper, "Cryovolcanic rates on Ceres revealed by topography," was recently published in Nature Astronomy. Funding was provided by the National Aeronautics and Space Administration (NASA) Dawn Guest Investigator Program.