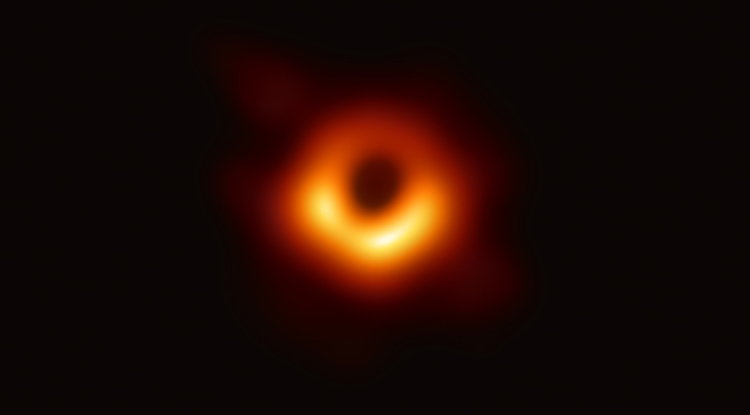 On April 10, EHT researchers revealed the first direct visual evidence of the supermassive black hole in the center of Messier 87 and its shadow. (Image: EHT Collaboration)

With the help of two radio telescopes coordinated by the UA, astronomers have taken the first direct image of a black hole. By connecting radio telescopes across five continents into one Earth-sized virtual telescope, they managed to resolve the shadow of a supermassive black hole, a prediction of Einstein's General Theory of Relativity.
Daniel Stolte
,
University Communications
April 10, 2019
Resources for the Media
Extra Info: 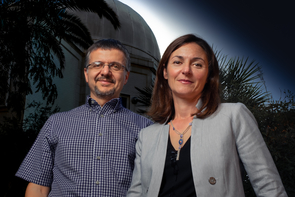 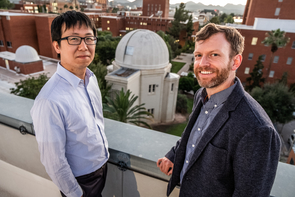 From left: Chi-kwan Chan is an assistant astronomer at the UA and leads the EHT Computations and Software Working Group. Daniel Marrone, associate professor of astronomy, was instrumental in integrating the South Pole Telescope into the EHT array. (Photo: Bob Demers/UANews) 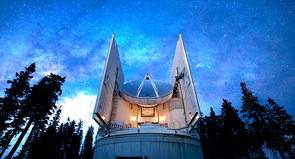 The Submillimeter Telescope on Mount Graham in Arizona helped capture the radio signals emanating from the supermassive black hole at the center of the M87 galaxy. (Photo: David Harvey) 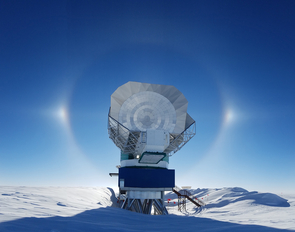 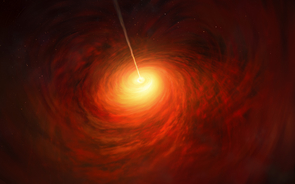 This artist’s impression depicts the black hole at the heart of the enormous elliptical galaxy Messier 87 (M87). This black hole was chosen as the object of paradigm-shifting observations by the Event Horizon Telescope. The superheated material surrounding the black hole is shown, as is the relativistic jet launched by M87’s black hole. (Credit: ESO/M. Kornmesser) 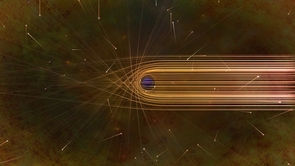 This artist’s impression depicts the paths of photons in the vicinity of a black hole. The gravitational bending and capture of light by the event horizon is the cause of the shadow captured by the Event Horizon Telescope. (Credit: Nicolle R. Fuller/NSF)

On April 10, researchers of the globe-spanning Event Horizon Telescope collaboration unveiled the first direct visual evidence of a supermassive black hole and its shadow. The discovery was announced in a series of six scientific papers published in a special issue of The Astrophysical Journal Letters.

The result of years of international collaboration, the Event Horizon Telescope, or EHT, offers scientists a new way to study the most extreme objects in the universe predicted by Albert Einstein’s Theory of General Relativity during the centennial year of the experiment that confirmed the theory.

Black holes have been the realm of science fiction and abstract textbook diagrams for more than a century. No one had ever seen what was deemed an object that, by its very definition, cannot be seen. Ever. An object so alien that it defies our imagination, whose mere presence rips apart everything we think we know about the laws of physics, and so extreme it twists space and time and the very essence of our existence into a swirling, contorted maelstrom of… nothing.

Welcome to Messier 87, or M87, a massive galaxy in the Virgo galaxy cluster 55 million light-years from Earth. At its fuzzy, glowing center sits a supermassive black hole, with a mass 6.5 billion times that of our sun.

Taking a direct image of the black hole in M87 is a feat that would not have been possible a decade ago. Even though the object is about the size of our solar system, it is so far away that resolving its features across 55 million light-years is like "taking a picture of a doughnut placed on the surface of the moon," according to EHT Project Scientist Dimitrios Psaltis, a professor of astronomy and physics at the University of Arizona.

Supermassive black holes are relatively tiny astronomical objects, which has made them impossible to directly observe until now. The size of a black hole is proportional to its mass, so the more massive a black hole, the larger the shadow. Scientists now think that black holes with masses that are millions or even billions of times that of the sun lie at the centers of most galaxies, with some outshining all of the other stars combined.

Thanks to its enormous mass and relative proximity, M87’s black hole was predicted to be one of the largest viewable from Earth, making it a perfect target for the EHT. Eight telescopes came together into one virtual telescope as big as Earth, offering unprecedented sensitivity and resolution.

The EHT observations use a technique called very-long-baseline interferometry, or VLBI, which synchronizes telescope facilities around the world and exploits the rotation of our planet to form one huge telescope observing at a wavelength of 1.3mm.

"The observations were a coordinated dance in which we simultaneously pointed our telescopes in a carefully planned sequence," says Daniel Marrone, associate professor of astronomy at the UA. Marrone traveled to Antarctica with graduate student Junhan Kim several times to integrate the South Pole Telescope into the EHT array. "To make sure these observations were truly simultaneous, so that we could see the same wavefront of light as it landed on each telescope, we used extremely precise atomic clocks at each of the telescopes."

After two weeks of observing, the researchers collected about 5,000 trillion bytes of data on 1,000 disks – enough to keep a playlist of high-quality mp3 files playing for 4,700 years. The data were flown to supercomputers known as correlators at the Max Planck Institute for Radio Astronomy in Bonn, Germany, and the Massachusetts Institute of Technology's Haystack Observatory in Westford, Massachusetts. There, VLBI experts distilled the raw data to a more usable volume.

Following calibration of the data, members of the EHT collaborated to reconstruct the black hole images. Working in separate groups using different methods, they all arrived at the same result.

Still, how can an object so dense that nothing, not even light, can escape its gravitational pull be seen? As ferocious as they are, black holes are extremely compressed cosmic objects, containing incredible amounts of mass within a tiny region. While the black hole itself is invisible, it gives away its presence by warping spacetime and superheating any surrounding material.

Stars on the menu

As surrounding gas and dust plunge into the abyss of space and time, and entire stars are shredded into wispy swirls, matter piles up around the black hole, forming a so-called accretion disk of plasma – charged particles heated to billions of degrees and accelerated to almost the speed of light. Due to the black hole's massive gravity, light gets bent around it, creating a tell-tale photon ring, the appearance of which is predicted by Einstein's equations. If Einstein's equations are correct, a dark region should appear in the center, caused by the absence of light captured by the black hole.

An image of the shadow of a black hole is the closest thing to an image of the black hole itself, a completely dark object from which light cannot escape. In the case of M87, the shadow appears around 2.5 times larger than the true size of the black hole’s boundary – the event horizon from which the EHT takes its name – due to light bending. For M87, the horizon should be just under 25 billion miles across, about three times the size of Pluto's orbit.

"This is a huge day in astrophysics," said National Science Foundation Director France Córdova. "We're seeing the unseeable. Black holes have sparked imaginations for decades. They have exotic properties and are mysterious to us. Yet with more observations like this one they are yielding their secrets. This is why NSF exists. We enable scientists and engineers to illuminate the unknown, to reveal the subtle and complex majesty of our universe."

"The Event Horizon Telescope allows us for the very first time to test the predictions of Einstein’s General Theory of Relativity around supermassive black holes in the centers of galaxies," Psaltis says. "The predicted size and shape of the shadow theory match our observations remarkably well, increasing our confidence in this century-old theory."

"Black holes are natural laboratories that the universe provides us with. Everything about them is extreme," says Feryal Ozel, a member of the EHT Science Council and professor of astronomy and physics at the UA. "Take quantum mechanics and our theory of gravity, for example: They are not compatible, and around a black hole, they might even break down completely. This is what we have aimed to test with the EHT."

Ozel led the Modeling and Analysis Working Group, which was tasked with measuring the size of the black hole's shadow and comparing the predictions of Einstein’s theories to the EHT observations. Once EHT scientists were sure they had imaged the shadow, they compared their observations to extensive computer models that include the physics of warped space, superheated matter and strong magnetic fields.

UA team members Psaltis, Marrone, Ozel, Chi-kwan Chan, Lia Medeiros and several graduate and undergraduate students used funding from a $6 million Partnerships for International Research and Education grant and an earlier $1.2 million Advanced Technologies and Instrumentation award, both from the National Science Foundation, to provide cutting-edge technologies to support the EHT collaboration. In addition to building and maintaining the EHT cloud infrastructure, the team generated high-fidelity models of EHT observations by harnessing the power of a supercomputer consisting of 140 Nvidia graphics-processing units, or GPUs, commonly used for graphics-heavy video-gaming applications.

GPUs: Not just for gaming anymore

The UA EHT team developed the first code that traced the path of light and simulated its encounters with black holes to compute realistic images of black holes. The time-dependent simulations of the black hole's shadow as predicted by general relativity are hosted in the NSF-funded CyVerse, headquartered at the UA. They help scientists visualize light trapped in the fabric of space and time, curving around the black hole by its massive gravity, to study how black holes interact with nearby matter.

"New technologies such as cloud computing are essential to support international collaborations like this," says Chi-kwan Chan, leader of the EHT Computations and Software Working Group and an assistant astronomer at the UA. Chan built and maintains the cloud infrastructure for the EHT. "When we were working on the six papers, we had over 20 powerful virtual machines running in two Google data centers – one on the East Coast and one on the West Coast – to serve the EHT members' computation needs across the globe."

In addition to integrating the South Pole Telescope into the EHT array, the UA was responsible for bringing the Submillimeter Telescope on Mount Graham in southeastern Arizona into the network. The other telescopes contributing to this result were the Atacama Large Millimeter Array, or ALMA, and the Atacama Pathfinder Experiment, or APEX, both in the Chilean Atacama Desert, the IRAM 30-meter telescope in the Spanish Sierra Nevada, the James Clerk Maxwell Telescope and the Submillimeter Array in Hawai`i, and the Large Millimeter Telescope Alfonso Serrano in Mexico.

This research was presented in a series of six papers published April 10 in a special issue of The Astrophysical Journal Letters:

In honor of the EHT's work, the UA Flandrau Science Center & Plantetarium is hosting a special limited engagement viewing of "Black Holes: EHT Edition" from April 10 to April 14. For show times, visit https://flandrau.org/news/2019/04/new-discoveries-about-black-holes.