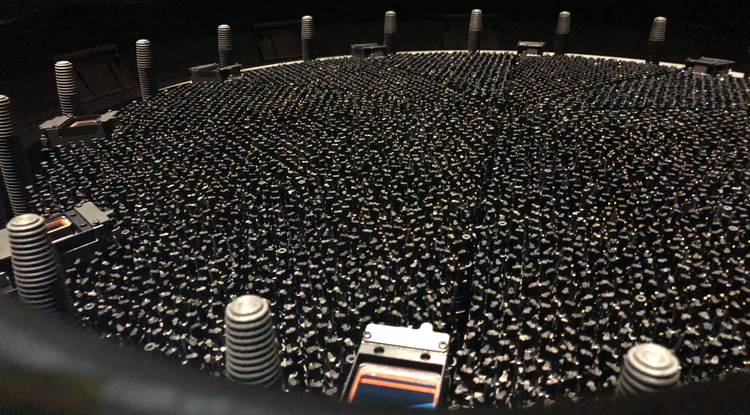 University of Arizona scientists and technology played key roles in an unprecedented effort to map millions of galaxies and quasars to better understand the nature of dark energy – the mysterious force that has pulled the universe apart since the Big Bang.
University Communications
Oct. 28, 2019
Resources for the Media
Extra Info:

DESI is supported by the U.S. Department of Energy’s Office of Science; the U.S. National Science Foundation, Division of Astronomical Sciences under contract to the NSF’s National Optical-Infrared Astronomy Research Laboratory; the Science and Technologies Facilities Council of the United Kingdom; the Gordon and Betty Moore Foundation; the Heising-Simons Foundation; the French Alternative Energies and Atomic Energy Commission; the National Council of Science and Technology of Mexico; the Ministry of Economy of Spain; and DESI member institutions. The DESI scientists are honored to be permitted to conduct astronomical research on Iolkam Du’ag (Kitt Peak), a mountain with particular significance to the Tohono O’odham Nation. View the full list of DESI collaborating institutions, and learn more about DESI at www.desi.lbl.gov.

The National Science Foundation’s National Optical-Infrared Astronomy Research Laboratory, the U.S. center for ground-based optical-infrared astronomy, operates multiple research facilities including Kitt Peak National Observatory. The Laboratory is operated by the Association of Universities for Research in Astronomy under a cooperative agreement with NSF’s Division of Astronomical Sciences. 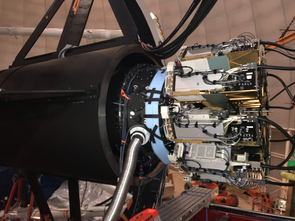 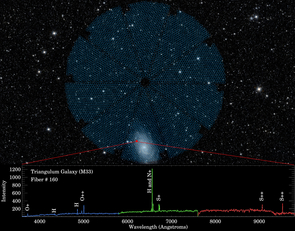 DESI’s 5,000 spectroscopic “eyes” gathered light from the Triangulum galaxy (bottom) on Oct. 22. Light from each single fiber-optic cable (red dot) is split into a spectrum (bottom) revealing the fingerprints of the elements present in the galaxy and aid in gauging the distance to the galaxy. (Image: DESI Collaboration; Legacy Surveys; NASA/JPL-Caltech/UCLA) 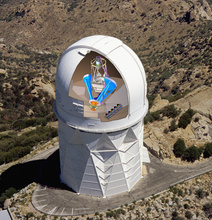 The DESI instrument was installed in the dome of the Mayall Telescope on Kitt Peak near Tucson, Arizona. (Image: DESI Collaboration) 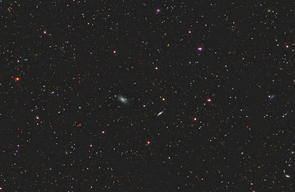 A view of galaxies and other objects collected by a series of surveys in preparation for DESI, the Dark Energy Spectroscopic Instrument. The university's Bok Telescope was instrumental in identifying targets for the DESI survey. (Image: DESI Legacy Imaging Surveys)

A new instrument mounted atop a telescope in Arizona aimed its robotic array of 5,000 fiber-optic “eyes” at the night sky to capture the first images of its unique view of galaxy light.

It was the first test of the Dark Energy Spectroscopic Instrument, or DESI, which is designed to explore the mystery of dark energy that makes up about 68% of the universe and is speeding up its expansion.

DESI’s components, some of which were developed at the University of Arizona, are designed to automatically point at preselected sets of galaxies, gather their light, and then split that light into narrow bands of color to precisely map their distance from Earth and gauge how much the universe expanded as this light traveled to Earth. In ideal conditions, DESI can cycle through a new set of 5,000 galaxies every 20 minutes.

Installation of DESI began in February 2018 at the Nicholas U. Mayall Telescope at Kitt Peak National Observatory near Tucson. The latest milestone marks the start of DESI’s final testing toward the formal start of observations in early 2020.

Like a powerful time machine, DESI will peer deeply into the universe’s infancy and early development – up to about 11 billion years ago – to create the most detailed 3D map of the universe.

By repeatedly mapping the distance to 35 million galaxies and 2.4 million quasars across one-third of the area of the sky over its five-year run, DESI will provide very precise measurements of the universe’s expansion rate. Gravity had slowed this rate of expansion in the early universe, though dark energy has since been responsible for speeding up its expansion.

Powered by supermassive black holes that gobble up material from their surroundings, quasars are churning maelstroms that are believed to lie at the center of most galaxies. Twisting time and space, they release enormous amounts of energy, which places them among the brightest objects in the universe. By precisely studying the distribution of galaxies and quasars over a large swath of the observable universe, DESI is poised to look deeply into the universe’s past.

"DESI will give us a three-dimensional map of galaxies, quasars and intergalactic gas over a very large part of the universe," said Xiaohui Fan, a Regents Professor of astronomy at Steward Observatory. "By looking at that map, we can see how the structure of the universe has changed with cosmic time, and that gives us an idea of how fast the universe is expanding at any given time."

Fan explained that DESI can map 20 times more quasars and galaxies than previous surveys, which were limited to a fairly small number of snapshots over the course of the history of the cosmos.

"This survey will cover its history almost continuously, and that will allow us to measure the effect of dark energy with much better precision than before," he said.

UArizona scientists helped lay the groundwork for the DESI project by conducting an imaging survey that was used to identify the targets on which DESI will train its robotic eyes. The survey was completed using more than 360 nights of observing time on the university's Bok Telescope, which is located next to the Mayall Telescope on Kitt Peak.

The DESI collaboration has participation from nearly 500 researchers at 75 institutions in 13 countries, including more than a dozen UArizona students, postdoctoral fellows and faculty members.

Over the past 18 months, a bevy of DESI components were shipped to the site from institutions around the globe and installed on the telescope. Among the early arrivals was an assembly of lenses packaged in a large steel barrel. This corrector barrel sits over the 4-meter primary mirror of the Mayall Telescope and provides an expansive field of view. The lenses, each measuring about a meter across, were successfully tested in April.

DESI’s focal plane, which is comprised of a half-million individual parts, is arranged in a series of 10 wedge-shaped petals that each contain 500 positioners and a little camera to help the telescope point and focus. The focal plane, which is on top of the telescope, carries 5,000 robotic positioners that swivel in a choreographed “dance” to individually focus on galaxies. These little robots, which each hold a light-gathering fiber-optic cable that is about the average width of a human hair, serve as DESI’s eyes.

It takes about 10 seconds for the positioners to swivel to a new sequence of targeted galaxies. With its unprecedented surveying speed, DESI will map over 20 times more objects than any predecessor experiment.

The focal plane, corrector barrel, and other DESI components weigh 11 tons, and the Mayall telescope’s movable arm that DESI is installed on weighs 250 tons and rises 90 feet above the floor in the Mayall’s 14-story dome.

Among the more recent arrivals at Kitt Peak is the collection of spectrographs that are designed to split up the gathered light into three separate color bands to allow precise distance measurements of the observed galaxies across a broad range of colors.

These spectrographs, which allow DESI’s robotic eyes to “see” even faint, distant galaxies, are designed to measure redshift, which is a shift in the color of objects to longer, redder wavelengths due to the objects’ movement away from us. Redshift is analogous to how the sound of a fire engine’s siren shifts to lower tones as it moves away from us.

Each spectrographs contains three cameras, one each for ultraviolet, visible and infrared wavelengths. One of the detectors in each camera was produced in the lab of Michael Lesser, director of the Imaging Technology Laboratory at Steward Observatory.

There are now eight spectrographs installed, with the final two scheduled to arrive before the end of the year. To connect the focal plane with the spectrographs, which are located beneath the telescope, DESI is equipped with about 150 miles of fiber-optic cabling.

The spectra obtained with DESI will inform science that goes beyond the study of dark energy, according to Steward Observatory Director Buell Jannuzi. In addition to probing quasars and galaxies, DESI will take spectra of stars and help answer questions about the nature of dark matter, which is invisible but thought to far surpass the amount of visible matter in the universe. In addition, the survey will help scientists to better understand the evolution of galaxies and quasars over time, all questions that UArizona researchers are working on, he said.

"With DESI we are creating a legacy dataset that will support all kinds of astrophysics in the future," Jannuzi said.