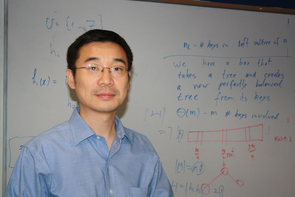 Beichuan Zhang, a UA assistant professor of computer science, is chiefly concerned with the financial economic and environmental strain caused by the Internet infrastructure in its current existence. (Photo by Beatriz Verdugo/UANews)

Chris Gniady is collaborating with Beichuan Zhang on a four-year, $620,000 National Science Foundation grant, bringing his expertise in operating systems and their architectural supports. 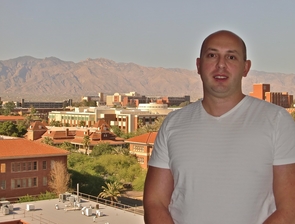 Chris Gniady is collaborating with Beichuan Zhang on a four-year, $620,000 National Science Foundation grant, bringing his expertise in operating systems and their architectural supports.

Would you leave your television set on around the clock with no one there to watch it? Probably not.

Yet, this is exactly how the Internet infrastructure is handled. Routers and modems are on at all hours at peak speed, awaiting traffic that may or may not come, using up unnecessary mounds of energy.

The two have received a four-year, $620,000 National Science Foundation grant to create new devices and protocols to help save money and lower the network infrastructure's overall carbon footprint – but not at the expense of performance.

"Right now, everything is on all the time to generate peak performance so that energy consumption is treated as a necessary evil to keeping performance high," said Gniady, whose expertise is in operating systems.

"But we want to figure out a way to run it smarter," Gniady said.

To remedy this issue, he and Zhang opted to collaborate, launching "Green Net: Energy Management for Network Infrastructure."

Consider this: The networks of today carry much unnecessary duplication, with extra routers and links, for instance, to ensure optimized performance.

Zhang and Gnaidy believe this duplication is unnecessary. For instance, both estimate that routers typically use, on average, 10 to 20 percent of their capacity.

Still, no one has yet determined an effective way to reduce the energy load while maintaining efficient performance.

So, the team will spend the next several years developing new routing schemes and devices that will enable parts of the Internet's infrastructure to "sleep" periodically.

In particular, the team will focus on figuring out ways to design and develop more "power-aware" routers. Another major area of development is creating a way to wake up systems that receive a sudden spike in demand, first figuring out how to adequately predict when peaks might occur.

Whereas computer science researchers have been concerned with disc speed, data storage and improving bandwidth, Zhang and Gniady's work aligns neatly with a challenge NSF posed several years ago encouraging scientists to focus on figuring out ways to reduce energy consumption.

The problem: The more powerful devices become, the more energy they consume.

"The infrastructure works very well, but it is not very energy efficient," said Zhang, who specializes in the Internet's architecture, routing security and content distribution via the Web.

"Not very many researchers have focused on this," Zhang said, noting that much of the energy management research has, instead, centered on hardware and smaller devices. But focusing on the infrastructure itself "is an emerging area and we think it has a lot of potential," he added.

The team's work carries important implications for anyone operating data centers – typically companies and organizations, which include technology-driven businesses, colleges and universities. But Zhang and Gniady said the project can also affect household Internet users.

"In the last five to 10 years, you didn't see so many data centers, but we are seeing more and more now," Zhang said. "But, if companies and organizations really started saving energy in this area, that would have a much bigger environmental impact."

Gniady notes that estimates indicate that data centers use about 1.5 percent of the nation's entire energy while households use 2 percent.

"That 1.5 percent may seem like a small percentage to most people," he said. "But, if this reaches 20 percent and we have done nothing about it, we will see a lot more money being spent. So, we want to make sure we don't get to that 20 percent mark."