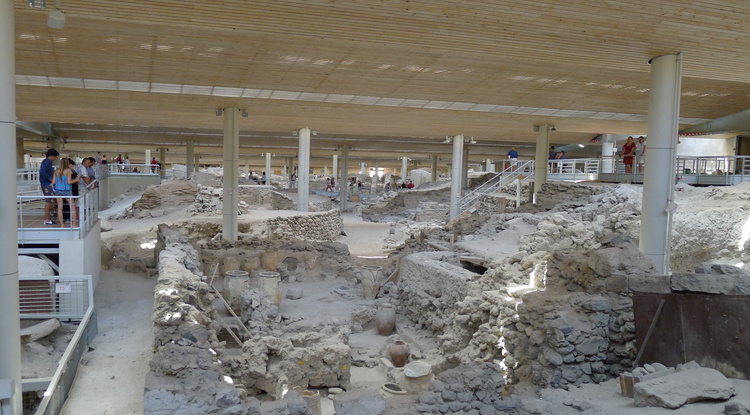 Akrotiri is the Minoan town on Santorini that was damaged by earthquakes building up to the eruption and then buried under ash once Thera erupted. The whole town site has a modern roof structure over it to protect the fragile site from the elements. (Photo: Gretchen Gibbs) 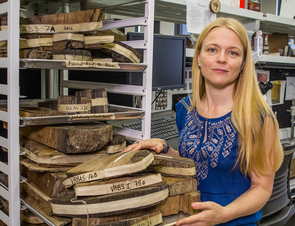 Charlotte Pearson analyzed annual tree rings from bristlecone pines and Irish oak to more accurately estimate the date of the Thera eruption. (Photo: Bob Demers/UA News)
A view across the Santorini caldera from the island of Therasia. The entire calderas is approximately 6 miles in diameter and the islands visible in the center are where the currently active vents are located. (Photo: Gregory Hodgins) 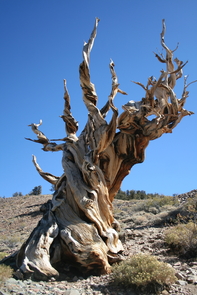 Charlotte Pearson and her colleagues used two different tree-ring chronologies from long-lived trees that were alive at the time of the Thera eruption, including bristlecone pines in California and Nevada. (Photo: Charlotte Pearson) 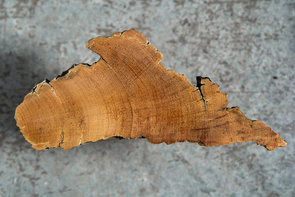 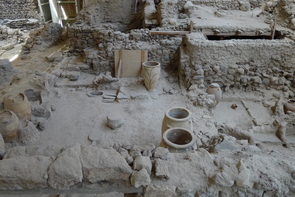 The earthquakes on Akrotiri seemed to happen in a couple of waves. One set did substantial damage to the town. There is evidence people started to repair the damage, but before repairs were complete, another set of quakes hit the town. It appears people abandoned it then and left fairly quickly, as many belongings were left behind. There have not been any human remains found, suggesting people left before the eruption occurred. (Photo: Gretchen Gibbs)

New analyses that use tree rings could settle the long-standing debate about when the volcano Thera erupted by resolving discrepancies between archeological and radiocarbon methods of dating the eruption, according to new University of Arizona-led research.

“It’s about tying together a timeline of ancient Egypt, Greece, Turkey and the rest of the Mediterranean at this critical point in the ancient world — that’s what dating Thera can do,” said lead author Charlotte Pearson, an assistant professor of dendrochronology at the UA Laboratory of Tree-Ring Research.

“What we can say now is that the radiocarbon evidence is compatible with the archeological evidence for an eruption of Thera in the 16th century BC,” Pearson said.

Thera’s explosive eruption on Santorini more than 3,400 years ago buried the Minoan settlement on the island in a layer of ash and pumice more than 130 feet (40 meters) deep. The effects of the eruption were felt as far away as Egypt and what is now Istanbul in Turkey.

“The volcano erupts and represents one short moment in time,” she said. “If you can date precisely when that moment is, then whenever you find evidence of that moment at any archeological site, you suddenly have a very precise marker point in time — and that’s really powerful for examining human/environmental interactions around that time period.”

Archeologists have estimated the eruption as occurring sometime between 1570 and 1500 BC by using human artifacts such as written records from Egypt and pottery retrieved from digs. Other researchers estimated the date of the eruption to about 1600 BC using measurements of radiocarbon, sometimes called carbon-14, from bits of trees, grains and legumes found just below the layer of volcanic ash.

By using radiocarbon measurements from the annual rings of trees that lived at the time of the eruption, the UA-led team dates the eruption to someplace between 1600 and 1525, a time period which overlaps with the 1570-1500 date range from the archeological evidence.

“There’s been a huge debate about the timing of the Thera eruption and radiocarbon vs. archeological dating,” Pearson said. “Our data indicates that radiocarbon dating can overlap with various lines of archeological evidence for the eruption date.”

The current radiocarbon calibration curve that was developed over the past 50 years using tree rings extends 14,000 years into the past. At that time, the scientists needed to use chunks of wood that combined 10 to 20 years of a tree’s annual rings to have enough wood to test for radiocarbon.

Work conducted at the UA Accelerator Mass Spectrometry Laboratory contributed substantially to the radiocarbon calibration curve currently in use worldwide.

Now radiocarbon testing requires just slivers of wood, so Pearson and her colleagues could test the annual growth rings of trees from 1500 back to 1700 BC — before, during, and after the time Thera was thought to have erupted. The 285 samples of annual tree rings were analyzed for radiocarbon at the UA AMS lab.

Co-author Gregory Hodgins, director of the UA AMS lab, said, “Charlotte’s redoing the calibration curve at an annual scale. What fell out of that was that the old calibration curve wasn’t precisely correct during this time frame.”

The paper, “Annual radiocarbon record indicates sixteenth century BC date for the Thera eruption,” by Pearson and her colleagues is scheduled to publish online Aug. 15 in Science Advances.

Pearson learned about the Thera eruption while studying archeology in college and has been fascinated by the eruption and its aftermath ever since.

Narrowing the date for the Minoan-era eruption of the volcano Thera is so important for Mediterranean archeology that there have been whole conferences about when that eruption occurred, she said.

Pearson wanted to know whether current dendrochronological and radiocarbon techniques could provide a more precise date for the eruption.

“Every tree ring is a time capsule of the radiocarbon at the year in which it grew, so we can say here’s a tree ring from 1600 BC and here’s how much radiocarbon is in it,” she said.

The radioactive carbon-14 within an annual tree ring starts decays at a steady rate and can act as a clock indicating when the tree grew that ring.

She and her colleagues used two different tree-ring chronologies from long-lived trees that were alive at the time of the Thera eruption but were growing 7,000 miles apart. Salzer’s extensive work on long-lived bristlecone pines living in California and Nevada provided the 200 tree-ring samples representing each year from 1700 to 1500 BC. Brown provided 85 Irish oak annual tree-ring samples that spanned the same years.

Because Irish oaks and bristlecone pines add a growth ring every year, the rings laid down year-by-year represent an environmental history going back thousands of years in time.

A massive volcano such as Thera ejects so much material into the atmosphere that it cools the earth. For cold-climate trees such as Irish oaks and bristlecones, that exceptionally cold year shows up as a much narrower tree ring.  Salzer’s work reveals at least four different years within the new radiocarbon age range for Thera where the bristlecone pines had exceptionally narrow rings that might indicate a huge volcanic eruption.

“What we’re doing in this study is using the annual nature of tree rings to improve the existing calibration curve for radiocarbon,” Pearson said. “We wanted to tackle this time period in hopes we could use this to shed new light on the Thera debate.”

Hodgins said, “This research is about Thera, but really, the implications of it are profound for anyone that uses radiocarbon dating throughout the world for this time span. There’s a kind of revolution in the radiocarbon community to revise the calibration curve using these more precise measurements.”

Other research teams are also finding discrepancies between their radiocarbon measurements using annual tree rings and the current radiocarbon calibration curve, he said.

Pearson, still fascinated by Thera, hopes future research can nail the eruption down to a particular year.