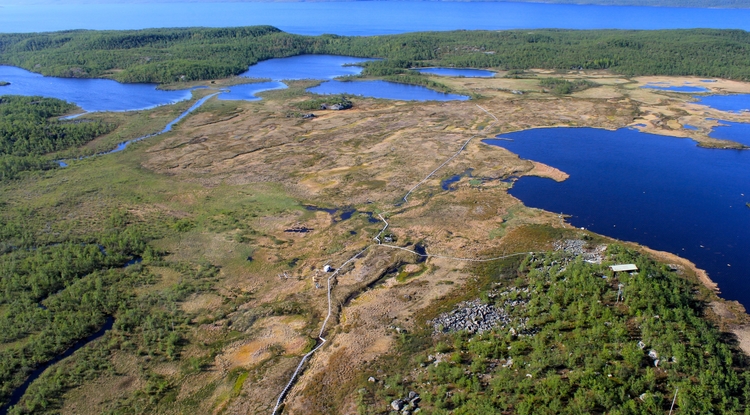 Discovery of Microbe Hiding in Permafrost Raises Concerns About Future

Scientists have discovered a type of methane-producing microbe blooming as permafrost in soils that are thawing due to a warming planet.
Daniel Stolte
,
University Communications
March 6, 2014
Resources for the Media 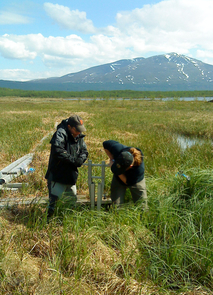 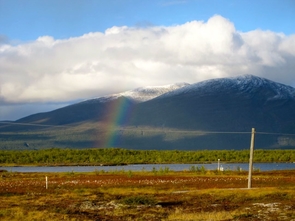 The thawing of previously year-round frozen soils under the influence of rising global temperatures has researchers worried about massive emissions of greenhouse gas freed by microbes. (Photo: Steve Frolking)

University of Arizona scientists have helped discover a microbe that is set to play a significant role in future global warming. The methane-producing organism was first identified in soils in northern Sweden that were once frozen year-round but have begun to thaw under the effect of globally rising temperatures.

As global warming continues, researchers warn that massive amounts of greenhouse gases from carbon stored in permafrost around the world – which makes up almost a quarter of the Earth's land surface – are likely to be released, further accelerating climate change.

The team made the discovery, published in the journal Nature Communications, by using DNA from soil samples and reconstructing a near-complete genome of the microbe, bypassing traditional methods of cultivating microbes in the lab. The researchers showed the organism and its close relatives live not just in thawing permafrost but also in many other methane-producing habitats worldwide.

"We noticed a bloom of one particular microbial type that comes to abundance in the thawed habitat. This organism just goes crazy." said Virginia Rich, an assistant professor in the UA's Department of Soil, Water and Environmental Science in the College of Agriculture and Life Sciences. "It is very unusual to see that kind of dominance within a microbial community in the soil."

Similar to food in a failing freezer, organic matter locked up in the thawing soils becomes available to microbes. As they consume these organic compounds, microbes release greenhouse gases like carbon dioxide and methane into the atmosphere. A potent greenhouse gas, methane is about 25 times more effective at warming the atmosphere than carbon dioxide. Of all the carbon in the world's soils, about a third is stored in permafrost soils.

"As permafrost thaws, the microbes kick into action and release more greenhouse gas, fueling global warming. It's a strong feedback loop, and overall we get a worse greenhouse gas footprint," said Rich, who has joint appointments in the departments of Ecology and Evolutionary Biology and Molecular and Cellular Biology at the UA. She also is a member of the UA Institute of the Environment.

"This is a site and a habitat that is literally at the leading edge of climate change," Rich said. "As temperatures warm, the boundary between intact and thawing permafrost is marching northward. You could say it's the canary in the coal mine of global change ecosystems."

The newly discovered microbe is a bacterium belonging to an evolutionarily ancient group of microbes called Archaea and has been assigned the preliminary name Methanoflorens stordalenmirensis, which roughly translates to "methane-bloomer from the Stordalen mire."

"Other scientists had seen this organism's genetic fingerprint in previous surveys aimed at reconstructing the assemblages of microbes living there, but nobody knew its identity and what it does," Rich said. "We found that it can become a dominant microorganism blooming after thaw.”

Because of the microorganism's high abundance, Rich's collaborators at the Australian Centre for Ecogenomics were able to pull out its genome sequence from the sum of the microbial community's DNA.

Eun-Hae Kim, a postdoctoral researcher in Rich's lab, studied the inventory of proteins these communities of microbes could make based on their genes and found what Rich called a smoking gun: extremely high levels of enzymes involved in methane production, produced by the newly discovered microbe.

"Our colleagues in Gene Tyson's group looked for the genetic fingerprint of this microbe in other surveys from across the planet." Rich said. "And they found it in 42 studies. From the tropics to the poles, you see this organism's fingerprint, and it turns out those are all methane-producing sites."

For now, the methane emissions are relatively small because most permafrost is intact, Rich said, but researchers are worried about a trend toward more thawing, which would release massive amounts of greenhouse gases.

The study was led by Rhiannon Mondav, Ben Woodcroft and Gene W. Tyson of the Australian Centre for Ecogenomics at the University of Queensland in Brisbane, Australia. In addition to Rich and Kim, the UA researchers who contributed to the paper include Carmody McCalley, a former postdoctoral fellow who just joined the University of New Hampshire, and Scott Saleska, a professor in the UA's Department of Ecology and Evolutionary Biology with a joint appointment in the UA's Department of Soil, Water, and Environmental Science.

The work was funded by the U.S. Department of Energy Office of Biological and Environmental Research’s Genomic Science Program and the Australian Research Council.