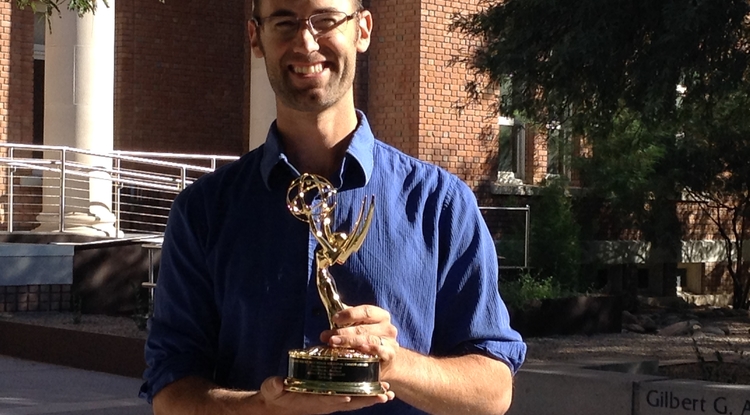 Cody Sheehy was honored for his creative effort as video coordinator of "Earthlight."

The documentary "Earthlight" follows the success of the Controlled Environment Agriculture Center lunar greenhouse team in constructing a closed system that recycles all air and water and produces food that astronauts will need for extended missions to the moon and Mars.

The Rocky Mountain Emmys, a division of the National Academy of Television Arts & Sciences, selected the film for an Emmy in the topical documentary category. The Emmy honors the creative effort of video coordinator Cody Sheehy, who worked closely with team members in the College of Agriculture and Life Sciences' communications and cyber technologies department at the University of Arizona.

"This award for Cody and the CCT team signals a professional recognition of the exceptional science communication done in CALS," said Shane Burgess, dean of the UA College of Agriculture and Life Sciences.

"Our production team delivers high-quality videos that bring to life what our college does daily," Burgess said. "The award also highlights a growing interest among the public to understand important, impactful research and to be inspired by it."

Sheehy's role was to shepherd the project from the first spark of an idea to the final edit that was aired on Arizona Public Media. He wrote, produced and directed the film.

"For the story to work, the lunar greenhouse really had to become a character," Sheehy said. "We had to convince the audience that it's not an inanimate object, but a living, breathing entity with a story to tell: how it has grown and changed over the years from a small greenhouse in the Antarctic, to a functioning system established at the Admundsen South Pole Station, to something designed for the moon that someday may spread its wings toward Mars."

Arizona Public Media executive producer John Booth brought "Earthlight" to air in July 2014, which qualified the video to compete for the Emmy.

"It's the professional environment and incredible support here in CALS that allowed for an idea like this to take root and bloom," Sheehy said. "When it comes to the reality behind the science, that’s where our documentary can fill the void for a smaller audience, one that’s really interested in the current technology with growing food in space and what the future might be."

The team's next project, a feature-length documentary and innovative Web experience, "Beyond the Mirage," will disentangle the complex water issues gripping Arizona, Nevada and California.