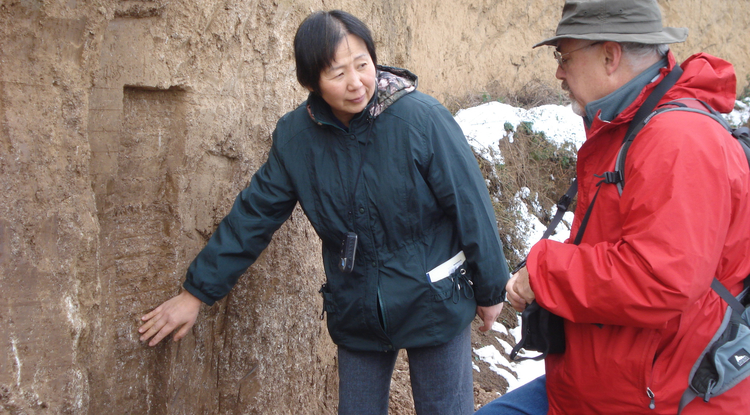 The Earth’s glacial/interglacial cycles depend on how much the sun warms the middle of the planet, not the northernmost region, according to new UA-led research.
Mari N. Jensen
,
UA College of Science
May 24, 2018
Resources for the Media 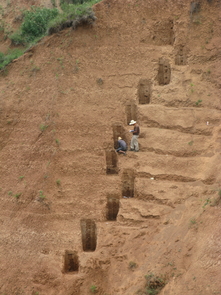 This hill of soil represents tens of thousands of years of deposition of a soil called loess. The researchers are collecting samples to use to reconstruct a record of the region’s climate stretching 550,000 years into the past. (Photo: © 2010 J. Warren Beck) 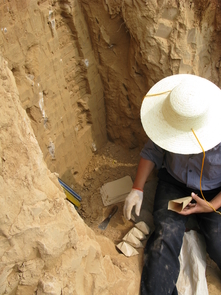 Soil called loess accumulated over tens of thousands of years near Xi’an, China. The layers of the loess allow researchers to reconstruct a record of the region’s climate stretching 550,000 years into the past using chemical elements in the loess. (Photo: © 2010 J. Warren Beck)

Ancient rainfall records stretching 550,000 years into the past may upend scientists' understanding of what controls the Asian summer monsoon and other aspects of the Earth's long-term climate, reports a University of Arizona-led international team of researchers in the May 25 issue of the journal Science.

The standard explanation of the Earth's regular shifts from ice ages to warm periods was developed by Milutin Milankovitch in the 1920s. He suggested the oscillations of the planet's orbit over tens of thousands of years control the climate by varying the amount of heat from the sun falling above the Arctic Circle in the summer.

"Here’s where we turn Milankovitch on its head," said first author J. Warren Beck, a UA research scientist in physics and in geosciences. "We suggest that, through the monsoons, low-latitude climate may have as much effect on high-latitude climate as the reverse."

Modern observations show the difference in heat propels atmospheric changes that drive the intensity of the monsoon. Beck said the monsoon can affect wind and ocean currents as far away as the North Atlantic and Arctic Oceans.

The Asian monsoon season is the biggest annual rainfall system on Earth and brings rainfall to about half the world's population. The monsoon season occurs approximately April to September.

Beck and his colleagues found that over tens of thousands of years the changes in the intensity of the Asian summer monsoon corresponded to the waxing and waning of the polar ice caps.

The researchers suggest those long-term changes in the monsoon drove global changes in wind and ocean currents in ways that affected whether the polar ice caps grew or shrank.

Beck said this new explanation of the Earth's past climate cycles will help climate modelers figure out more about the world’s current and future climate.

The new explanation of what drives the Earth's climate system stems from a decade-long effort by Beck and his colleagues to develop a new record of rainfall in Asia reaching far back into the past.

Scientists have been trying to develop a quantitative proxy for ancient precipitation for more than 30 years, he said.

By analyzing thousands of years of dust from north-central China for an element called beryllium-10, Beck and his colleagues developed the first quantitative record of the region's monsoon rainfall for the past 550,000 years.

The team studied the deposits of fine soil called loess that blow year after year from central Asian deserts into north-central China. The layer-cake-like deposits, hundreds of feet thick, are a natural archive extending back millions of years.

The researchers cut stepwise into the side of a hill of loess to expose a 60-yard (55-meter) span of loess representing 550,000 years. The researchers collected a loess sample every two inches (five centimeters). Two inches represents about 500 years.

To put together the ancient rainfall history of the area, team members analyzed the samples for beryllium-10 at the UA Accelerator Mass Spectrometry Laboratory and for magnetic susceptibility at the Chinese Academy of Sciences Institute of Earth Environment in Xi'an.

Other investigators used the natural archive of oxygen isotopes within stalagmites from several Chinese caves to reconstruct the region's past climate. Those records only partially agree with the rainfall-based records of ancient climate developed by Beck and his colleagues.

Beck and his colleagues suggest their new explanation of the forces driving the Earth's long-term climate cycles reconciles the climate record from Chinese stalagmites and modern observations of the monsoon with the new ancient rainfall record from Chinese loess.

The Science paper by Beck and his co-authors is "A 550,000-year record of East Asian monsoon rainfall from 10Be in loess."