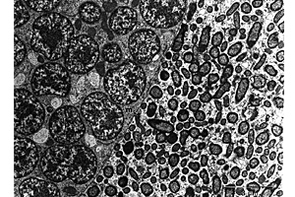 Electron micrograph of bacteria living inside the body of a pea aphid. The small circles and ovals on the right side of the picture are T-type bacteria that protect the aphid from parasitic wasps. The larger circles at the left are another type of beneficial bacteria, called Buchnera, which live in all aphids. (Photo: Joshua White) 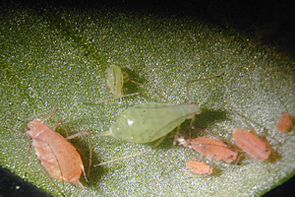 Adult and juvenile pea aphids on the surface of a fava bean leaf. (Photo: Jake Russell) 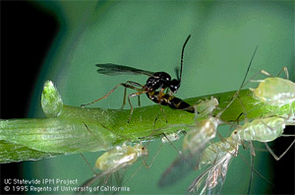 If you were a modern day Gulliver exploring the natural world, you might very well encounter miniscule Lilliputians and giant Brobdingnagians like the ones of make-believe.

It should be obvious which are whichgnats and mites, elephants and whales. But nature's stories can be even more fantastic than those from literature, and with careful scrutiny, your point of view can turn inside-out, making it surprisingly difficult to discern just who is Lilliputian and who is Brobdingnagian. Two University of Arizona doctoral candidates experience this paradox every day in their research.

Kerry Oliver, a graduate student in the interdisciplinary program in insect science, and Jake Russell, in the department of ecology and evolutionary biology, live inor regularly visit, at leastthe world of the pea aphid, an insect whose name itself bespeaks its place in the land of Lilliput.

Pea aphids occupy most of their lives tapped, with their straw-like beaks, into the tender fresh leaves and stems of sweet pea, clover, alfalfa, or other legumes. They gorge themselves with the sweet sap that the plants make, pumping the sap through their tissues for their own nourishment.

As any home gardener knows, plants don't take kindly to such pilferage of their lifeblood. Aphids cause untold destruction to gardens and agricultural crops alike. Besides the damage they inflict directly, aphids can spread disease-causing viruses to the plants they infest. Horticulturalists and farmers have been waging a hundred-years' war on the pests. One favored strategy is bio-controlunleashing natural aphid enemies such as ladybugs, which feast on the insects with vigor.

Oliver's and Russell's research has led to a better understanding of another form of aphid bio-control involving a parasitic wasp. Oliver will present the findings, which will be part of his doctoral dissertation, tomorrow at the 87th Annual Meeting of the Ecological Society of America, held this week at the Tucson Convention Center.

The wasp, Aphidius ervi, was introduced to North America from Europe as a weapon in the arsenal to fight off aphid infestations. A. ervi females use pea aphids as a sort of incubator to hatch their young. A prospective mother wasp impales a juvenile aphid with her egg-laying apparatus and deposits a single egg inside the tiny insect, Oliver said.

The aphid soon succumbs to the wasp larva growing inside its body. In a few days, when the juvenile wasp has completely eaten the internal flesh of the aphid, Oliver explained, the aphid corpse "mummifies," its green outer skin stretching and hardening into a brown shell. Soon after, the matured wasp eats its way out of its grisly birth chamber.

Oliver and Russell discovered that some pea aphids do have a fighting chance against the wasps. To defend themselves, the aphids enlist the help of some truly Lilliputian warriorsbacteria that live, by the thousands, inside specialized cells within the aphids' bodies. These bacteria are so obscure they haven't even been assigned scientific Latin names yet. Oliver and Russell just refer to them as the "R-type" and "T-type."

Although scientists have known about these bacteria for a while, no one knew exactly what they were doing inside the aphids. One recent study found that under certain conditions the R-type bacteria improves aphids' reproductive fitness, but the reason for this wasn't clear.

Oliver reports that the bacteria help pea aphids resist the otherwise fated death by wasp attack. Using a molecular diagnostic technique called PCR, the researchers identified pea aphids that were either uninfected or infected with the R-type or T-type bacteria. They then artificially infected some of the aphids by using tiny needles to inject them with bacteria-laden body fluid that they had removed from "donor" infected aphids. Infected aphids pass along bacteria to their offspring, so by allowing the artificially infected aphids to reproduce, the researchers could generate many infected aphids, which they were able to use in their experiments.

Under laboratory conditions, they allowed the infected and uninfected aphids to be attacked by the parasitic wasps. The wasps attacked all the aphids, regardless of whether they contained the bacteria. Aphids infected with the R-type or T-type bacteria, though, were more likely to survive the attacks. These survivors lived about as long as aphids that had never been attacked. In most cases, about 4-5 days after an infected aphid was attacked by a wasp the larva died, Oliver reported. Another common aphid bacterium, termed the U-type, offered no protection against wasp attack. The researchers don't yet know how the bacteria protect pea aphids from wasp attack.

The research offers several lessons. For ecologists, it offers an intimate glimpse into the social dynamics of three diverse creatures. To horticulturalists who would combat aphids with parasitic wasps, it provides an explanation for why the plan may not always work. And for the casual nature observerour modern day Gulliverit points out that a Lilliputian to one may be a Brobdingnagian to another.