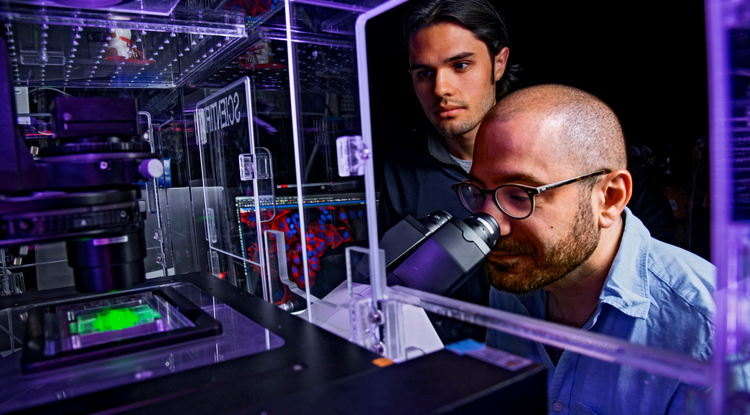 Breast cancer is one of the most common cancers in the United States, striking one out of eight women. About 80 percent of all breast cancers are estrogen receptor-positive, in which cancer growth is fueled by estrogen.

A discovery that could have implications for developing more precise treatments for estrogen receptor-positive, or ER-positive, breast cancer has been made by Marco Padilla-Rodriguez, a recent graduate of the UA College of Medicine – Tucson’s Graduate Program in Molecular Medicine. Padilla-Rodriguez untangled some of the mysteries of a protein called EVL — pronounced “evil” — which is thought to reduce the ability of ER-positive breast cancer to spread to other parts of the body.

As a graduate student, Padilla-Rodriguez collaborated with UA Cancer Center member Ghassan Mouneimne, assistant professor of cellular and molecular medicine, and a team of UA and international researchers to usee epidemiological data to compare breast cancer patients taking hormone replacement therapy at the time of diagnosis with those who were not. They analyzed genetic data to identify EVL as an important regulator of cancer cells’ ability to spread, and they conducted follow-up experiments in breast cancer cells.

ER-positive breast tumors are studded with estrogen receptors, which are like gas tanks that can be filled with estrogen, fueling cancer’s growth. Patients now are treated with surgery and chemotherapy, typically followed with anti-estrogenic drugs such as tamoxifen, which reduce cancer recurrence by cutting off breast cancer cells’ fuel supply.

The estrogen story is not “black and white,” however. Cancer is most dangerous when cells break free from the original tumor and travel to other areas of the body, a process called metastasis. But tumor cells can replicate without metastasizing, remaining contained in their original site. Although estrogen does increase the risk for the initiation of breast cancer and fuel its growth, it does not seem to promote metastasis.

The Mouneimne Lab analyzed genetic datasets to identify EVL as a factor in taming estrogen’s cancerous effects. They found that estrogen enhances the production of EVL, which seems to keep cancer cells contained to the original tumor site. As estrogen levels fall, so do levels of EVL, freeing cancer cells to invade neighboring tissues — the first step in metastasis. EVL’s role in regulating a cell’s actin cytoskeleton could be the key to its ability to suppress cell movement.

“Cells have skeletons, just like we have a skeleton,” Padilla-Rodriguez explained. “Actin is one type of skeleton. Unlike our skeleton, actin can be remodeled, like Lego pieces being shaped into different structures.”

Depending on how a cell rearranges its actin cytoskeleton, it might be more likely to stay in one place, adhering to adjacent cells, or it could have the ability to migrate, crawling away from other cells like a microscopic caterpillar.

“Generally, cells like to cluster together,” Padilla-Rodriguez said. “When we treat them with anti-estrogenic drugs, actin allows the cell to break away and pull itself forward.”

One of the next steps is to learn how to leverage EVL’s interaction with estrogen to develop combination treatments for patients with ER-positive tumors. While anti-estrogenic drugs rein in tumor growth, they also might indirectly reduce EVL levels, accelerating the remaining cancer cells’ invasion of neighboring tissues.

“With tamoxifen, you’re inhibiting the brakes,” Mouneimne said. “Now we want to go after the gas pedal to halt the cancer from progressing. Then we will be inhibiting both growth and invasion.”

Mouneimne is working with Tech Launch Arizona to commercialize a method to measure EVL levels in ER-positive breast tumors, with the hope that someday such a diagnostic could be used to expand personalized medicine options for breast cancer patients.

A version of this article originally appeared on the UA Cancer Center website: uacc.arizona.edu/news/evil-proteins-are-force-good-ER-breast-cancer