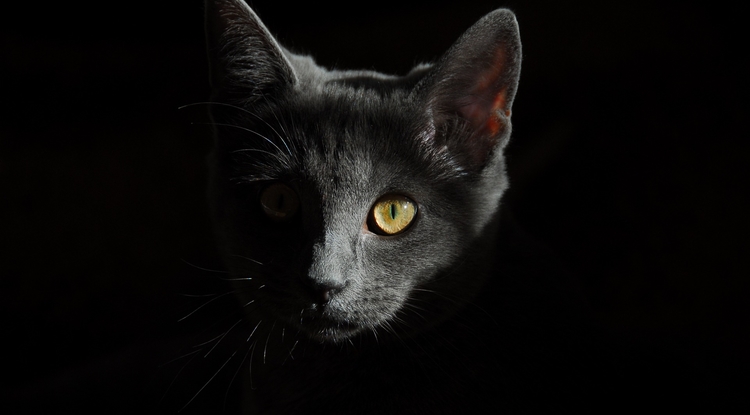 "If we ever want to really understand how to reduce or fight human-to-human genocide, we have to understand our killing of animals," says UA researcher Uri Lifshin. 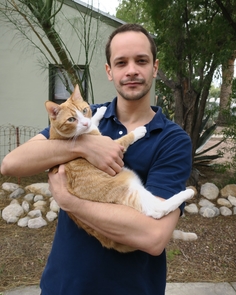 Uri Lifshin holds his cat, Chupchik. Lifshin's own love of animals is, in part, what drove him to study humans' psychological reasons for supporting killing them.

When reminded of death, humans become more likely to support killing animals, regardless of their existing attitudes about animal rights, according to new research from the University of Arizona.

The research provides new insight into the psychology behind humans' willingness to kill animals for a variety of reasons, and could also potentially help scientists better understand the psychological motivations behind the murder and genocide of humans, said lead researcher Uri Lifshin, a doctoral student in the UA Department of Psychology.

Lifshin and his colleagues conducted a series of experiments based on their existing work on terror management theory — the idea that humans' awareness of their own mortality is a strong motivator for behaviors that may help quell the fear of death.

During the experiments, half of participants were presented with a subliminal or subtle "death prime"; either they saw the word "dead" flash briefly on a computer screen or they saw an image of a T-shirt featuring a skull made up of several iterations of the word "death."

The other half of participants — the controls — instead saw the word "pain" or "fail" flash across the screen, or they saw an image of a plain T-shirt.

Study participants were then asked to rate how much they agree with a series of statements about killing animals, such as, "It is often necessary to control for animal overpopulation through different means, such as hunting or euthanasia," or, "An experiment should never cause the killing of animals." The researchers avoided asking questions about some of the more broadly accepted justifications for killing animals, like doing so for food.

In all experiments, those who received the death prime were more likely to support killing animals.

Prior to the start of experiments, participants were asked to report their feelings about animal rights. Surprisingly, it didn't matter if people self-identified as supporters of animal rights. While those individuals were overall less likely than others to support killing animals, the death prime still had the same effect on them.

"If you're an animal lover or if you care about animals rights, then overall, yes, you are going to support the killing of animals much less; however when you're reminded of death you're still going to be a little bit more reactive," Lifshin said. Worth noting, the study did not include overt animal rights activists, who might be affected differently. Additional research is needed for that population, Lifshin said.

Gender also didn't change the effect of the death prime. Consistent with existing literature, male participants were generally more likely than females to support killing animals, but males and females were both affected in the same way by the death prime.

The UA researchers' paper, "The Evil Animal: A Terror Management Theory Perspective on the Human Tendency to Kill Animals," was published in the Personality and Social Psychology Bulletin. Their findings are based on psychology's terror management theory, which is derived from anthropologist Ernest Becker's 1974 Pulitzer Prize-winning book, "The Denial of Death." The theory posits that humans use self-esteem as a buffer against fear of death.

Self-esteem can be achieved in different ways. In a previous study, Lifshin and his colleagues showed that when people who enjoy playing basketball are reminded of their mortality, they improve their performance on the basketball court, and thereby their self-esteem, to manage their fear of death.

In the animal study, researchers think death-primed participants supported killing animals more because it provided them with a sense of power or superiority over animals that indirectly helped them fend off fear of mortality, Lifshin said.

This all happens subconsciously.

"Sometimes, our self-esteem depends on the idea that we are special and not just sacks of meat. We want to feel powerful, immortal — not like an animal," said Lifshin, a proud pet owner whose own love of animals is, in part, what drove him to study why anyone would do them harm.

To further test the terror management connection, Lifshin and his colleagues designed one of their experiments to look at whether giving participants an alternative self-esteem boost would change the effect of the death prime.

"We didn't find that people's general state of self-esteem made a difference; it was this self-esteem boost," Lifshin said. "Once your self-esteem is secured, you no longer need to satisfy the need for terror management by killing animals."

Findings Could Contribute to Understanding Psychology of Genocide

Even so, the research could still have important implications for the study of the psychology behind murder and genocide of humans who fall into outgroups because of their race, religion or other characteristics, since those individuals tend to be dehumanized by those who would do them harm, Lifshin said.

"We dehumanize our enemies when there is genocide. There is research in social psychology showing that if you go to places where genocide is happening and you ask the people who are doing the killing to try to explain, they'll often say things like, 'Oh, they're cockroaches, they're rats, we just have to kill them all,'" Lifshin said. "So if we ever want to really understand how to reduce or fight human-to-human genocide, we have to understand our killing of animals."