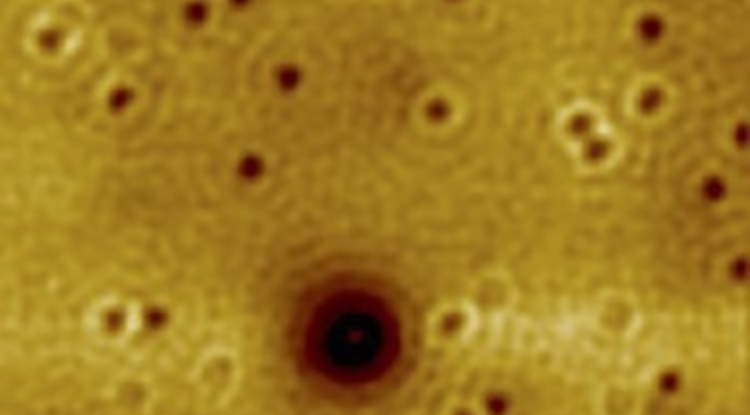 An image of electronic scattering in WSe2, a transition metal dichalcogenide, or TMD, that could be part of the next wave of semiconductors

Findings May Lead to Next Semiconductors

Smack in the middle of Brian J. LeRoy’s office floor lies an idle air-hockey table and the box it arrived in. A user's manual is strewn to one side. The table, as it turns out, is an experiment gone awry, for now at least. LeRoy was hoping to use it in a physics lab to teach undergraduates about collisions.

But another experiment in LeRoy’s lab, one involving a family of materials known as transition metal dichalcogenides, or TMDs, is going quite well.

Based on optical, or laser-based, experiments, researchers long have suspected that TMDs could one day replace silicon in everyday electronic devices. But LeRoy, an associate professor of physics at the University of Arizona, and his collaborators have gathered the first electronic-based evidence confirming what the optical evidence already suggested. The results were published last month in Physical Review Letters.

These materials have been classified optically quite well, using lasers, says Matthew Yankowitz, a graduate student in the UA Department of Physics and a member of LeRoy’s lab.

"The optical way doesn’t tell you what will happen in real devices," Yankowitz says. "But we’ve characterized these materials with a direct electrical probe, and for device purposes that’s most relevant because that’s how they’ll be operated."

Thanks to its abundance, low cost and electronic properties, silicon is now the semiconductor of choice when it comes to electronic devices. But scientists are searching for even better semiconductors, ones that are two-dimensional, structurally flexible, more energy efficient and nearly transparent, meaning that devices could process information faster, have longer battery life and be used in touch screens.

As it turns out, TMDs may fit that profile. Currently, LeRoy and his colleagues are focusing their research on one TMD in particular — tungsten diselenide, or WSe2.

It should be noted that in the 1970s, researchers focused their attention on TMDs, but only in their three-dimensional form. Recently, though, scientists found that semiconductors can take on a two-dimensional state, and that includes WSe2. As a result, interest has surged in TMDs as semiconductors.

"Interestingly, current research on TMDs was sparked by the discovery of graphene, a one-atom layer of graphite," says LeRoy, gesturing toward a thumb-size glass bottle of shimmery gray graphite flakes resting on his desk.

"Historically, people thought it was impossible to make monolayers of graphene," Yankowitz says. "The fact that it even exists was a huge revelation. Its electronic properties are really out of this world. It’s the most conductive material we know of. It’s defect free, flexible and nearly transparent."

So, why hasn’t graphene taken over the world yet?

Instead, the traits of semiconductors in two-dimensional materials are what researchers such as LeRoy and Yankowitz are after.

"Now the idea is to find out how to exploit these materials’ unique properties for application in all sorts of devices," LeRoy says.