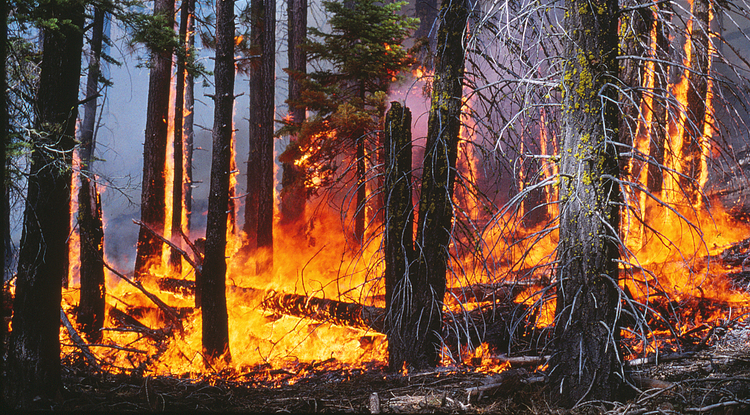 The low-to-moderate intensity surface fire in this prescribed burn will lower the fuel load in this forest in the Lake Tahoe Basin. (Photo: Alan H. Taylor)

Forest Fires in Sierra Nevada Driven by Past Land Use

Changes in human uses of the land have had a large impact on fire activity in California’s Sierra Nevada since 1600, according to research by a UA researcher and her colleagues.
Mari N. Jensen
,
UA College of Science
Nov. 14, 2016
Resources for the Media
Extra Info: 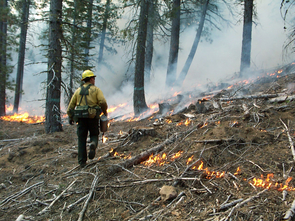 Forest fire activity in California's Sierra Nevada since 1600 has been influenced more by how humans used the land than by climate, according to new research led by University of Arizona and Penn State scientists.

For the years 1600 to 2015, the team found four periods, each lasting at least 55 years, where the frequency and extent of forest fires clearly differed from the time period before or after.

However, the shifts from one fire regime to another did not correspond to changes in temperature or moisture or other climate patterns until temperatures started rising in the 1980s.

"We were expecting to find climatic drivers," said lead co-author Valerie Trouet, a UA associate professor of dendrochronology. "We didn’t find them."

Instead, the team found the fire regimes corresponded to different types of human occupation and use of the land: the pre-settlement period to the Spanish colonial period; the colonial period to the California Gold Rush; the Gold Rush to the Smokey Bear/fire suppression period; and the Smokey Bear/fire suppression era to present.

"The fire regime shifts we see are linked to the land-use changes that took place at the same time," Trouet said.

"We knew about the Smokey Bear effect — there had been a dramatic shift in the fire regime all over the Western U.S. with fire suppression. We didn't know about these other earlier regimes," she said. "It turns out humans — through land-use change — have been influencing and modulating fire for much longer than we anticipated."

Finding that fire activity and human land use are closely linked means people can affect the severity and frequency of future forest fires through managing the fuel buildup and other land management practices — even in the face of rising temperatures from climate change, she said.

The team's paper, "Socio-Ecological Transitions Trigger Fire Regime Shifts and Modulate Fire-Climate Interactions in the Sierra Nevada, USA 1600-2015 CE," was scheduled for publication in the online Early Edition of the Proceedings of the National Academy of Sciences this week.

Trouet's co-authors are Alan H. Taylor of Penn State, Carl N. Skinner of the U.S. Forest Service in Redding, California, and Scott L. Stephens of the University of California, Berkeley.

Initially, the researchers set out to find which climate cycles, such as the El Niño/La Niña cycle or the longer Pacific Decadal Oscillation, governed the fire regime in California's Sierra Nevada.

The team combined the fire history recorded in tree rings from 29 sites all along the Sierra Nevada with a 20th-century record of annual area burned. The history spanned the years 1600 to 2015. However, when large shifts in the fire history were compared to past environmental records of temperature and moisture, the patterns didn't match.

However, the frequency of forest fires did not closely track climatic conditions, particularly after 1860.

The researchers reviewed historical documents and other evidence and found the shifting patterns of fire activity most closely followed big changes in human activity in the region.

Before the Spanish colonization of California, Native Americans regularly set small forest fires. The result was a mosaic of burned and unburned patches, which reduced the amount of fuel available to fires and limited the spread of any particular fire.

However, once the Spanish arrived in 1769, Native American populations rapidly declined because of disease and other causes. In addition, the Spanish government banned the use of fire. Without regular fires, fuels built up, leading to more and larger fires.

The influx of people to California during the Gold Rush that began in 1848 reduced fire activity. The large numbers of livestock brought by the immigrants grazed on the grasses and other plants that would otherwise have been fuel for forest fires.

In 1904, the U.S. government established a fire suppression policy on federal lands. After that, fire activity dropped to its lowest level since 1600.

Starting in the 1980s, as the climate warms, fire frequency and severity has increased again.

Fires now can be "bad" fires because of a century or more of fire suppression, according to lead co-author Taylor, a professor of geography at Penn State.

"It is important for people to understand that fires in the past were not necessarily the same as they are today," Taylor said. "They were mostly surface fires. Today we see more canopy-killing fires."