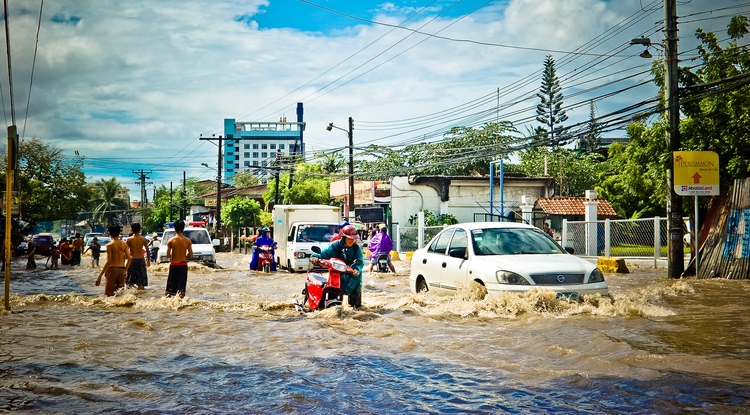 UA researcher Laura A. Bakkensen grew up in the Pacific Northwest and has long held a strong connection with the natural environment. As a scholar, Bakkensen studies how humans benefit from, and are harmed by, weather and climate. She has investigated the economic impact of flooding, hurricanes and tornadoes in the U.S. and abroad in South Korea, China, the Indian Ocean and the Mediterranean Sea.

Laura A. Bakkensen explains why natural disaster resilience has become a common policy goal, with billions of dollars being spent around the world to try to achieve it.
La Monica Everett-Haynes
,
University Communications
Oct. 10, 2016
Resources for the Media
Extra Info:

"Four Questions" is an occasional feature in which UANews asks experts from the UA for their perspective on current events or pop culture.

The destructive nature of Hurricane Matthew — which resulted in hundreds of deaths in Haiti, dozens more in the U.S. and extensive damage still being assessed — was a test of strength in communications systems, infrastructure and ultimately the resilience of communities.

In addition to Matthew, Hurricane Earl, Tropical Storm Fiona, Hurricane Gaston, Hurricane Hermine and Tropical Storm Nicole are among the 14 named storms this Atlantic hurricane season — already more than 12 originally projected for the season, which extends into November.

What's more, such storms are causing more damage, and such devastation is a trend replicated elsewhere with losses increasing from tornadoes, floods, wildfires, excessive heat and other costly and life-threatening extreme weather conditions.

During the period of 2005-2015, extreme weather conditions resulted in the death of more than 6,500 people in the U.S. Since 2005, the Federal Emergency Management Agency has contributed more than $26 million nationwide toward disaster preparedness. Also, the U.S. Department of Housing and Urban Development has spent about $1 billion in natural disaster resilience.

The study of ways to help communities become more resilient so that they can be better prepared and quicker to recover when natural disasters occur is an emergent field to which University of Arizona researcher Laura A. Bakkensen contributes.

Concerned with the economic impact of natural disasters, Bakkensen, an assistant professor in the UA School of Government and Public Policy, investigates natural disaster losses as well as disaster readiness and response.

Bakkensen and her collaborators have found that community disaster resiliency is broadly defined as the ability through policies, programs and interventions to mitigate damage and quickly recover when disasters occur. Resiliency measures vary, and they may include rates related to poverty, educational level, homeownership, and access to vehicles and telecommunications networks. Other measures include infrastructure density and the presence of hazard mitigation plans.

Bakkensen responded to four questions about concerns associated with natural disasters and the need to improve community resiliency.

Q: You and your collaborators have found that resilient communities are better able to recover from devastating disasters. What are the implications for such a finding, particularly as it pertains to community and economic development?

A: Natural disaster resilience is a common policy goal these days, and billions of dollars are being spent around the globe to try and achieve it. Despite risk-management actions to lessen impacts, disasters losses have increased over time. This, at least in part, has motivated the new resilience paradigm across multiple levels of government. Effort must be tailored to the needs and unique local characteristics. However, in a recent publication, my co-authors and I show that resilience as a concept can be tricky to meaningfully quantify. One important implication is that communities should be careful about which metrics they use to make decisions, to be sure that money is targeted toward projects that can meet their specific goals.

Q: What does it mean to be a vulnerable community? Also, what are some of the essential tools present in resilient communities that are lacking in those that are vulnerable?

A: Broadly speaking, resilient communities are better able to bounce back and recover from adverse events, relative to more vulnerable communities. A growing literature quantifies vulnerability and resilience in disaster indices, grouping variables across economic, social, infrastructural and other domains. However, resilience can often be elusive to pin down and quantify. In a recently published article, my co-authors and I find that theoretically persuasive metrics of resilience do not always correlate with observed disaster outcomes, such as fewer fatalities or reductions in disaster losses.

Thus, policymakers should be careful when using resilience indices and select a resilience index that is a good measure of outcomes relating to their policy objectives. For example, we find the often-used Social Vulnerability Index (SoVI) to be useful in explaining natural disaster damages, as areas that are more vulnerable, based on this index, have higher levels of damages in a regression analysis. However SoVI does not strongly explain fatalities from disasters, as areas that are more vulnerable, based on the index, do not have significantly more fatalities. So, we recommend that policymakers be careful when choosing which index on which to base their decisions.

Q: You and your collaborators also call for improved research on the implications — some of them negative — related to how hurricanes are gendered in naming. Why do we need to have a better understanding about how something as simple as a hurricane's name has an impact on the population?

A: Understanding disaster risk is a key component in deciding how to respond, be it evacuating from a hurricane zone or pulling over while driving through a dust storm. People must perceive that the threat is credible and that consequences from inactivity are bad enough. If we misjudge risks, this can result in people unknowingly putting themselves in harm's way, with potentially fatal results. As such, a key area of my research analyzes how individuals understand disaster risk. In the context of hurricane names, the good news for society is that my co-author and I did not find evidence that individuals discount hurricanes with female names. However, in other current work, I find evidence that individuals do not always pay attention to tornado warnings broadcast by the National Weather Service, which leads to higher levels of tornado injuries and fatalities.

Q: Given the statistical rise in natural disasters — considering Hurricane Matthew, this year's flooding in Louisiana and West Virginia, the Southeast blizzard from earlier this year and also the more intense wildfires seen throughout the West and Southwest — how can communities become better equipped to respond?

A: Research has shown that certain advanced-planning strategies can, in essence, pay for themselves by reducing the magnitude of disaster damages. However, my current research in flooding shows that people can sometimes forget about disaster risk until a disaster strikes. Realizing this, one thing that communities and policymakers can do is to evaluate spending both before and after a disaster. Spending a little more up-front and preparing for disasters can, in some cases, make good financial sense. Of course, each policy should be evaluated based on its own costs and benefits. On an individual level, information really is power when it comes to natural disaster preparedness. Some tips are:

While we cannot directly control the weather, preparedness and information can help empower us to know that we will be ready to deal with whatever comes our way.