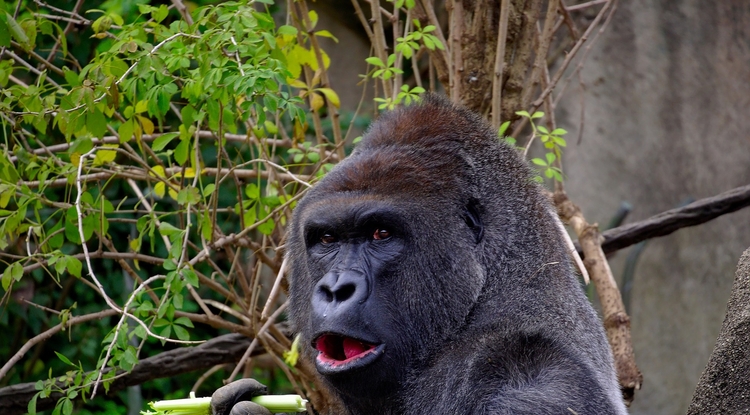 Four Questions: Could Apes Talk as They Do in the Movies?

In the "Planet of the Apes" movies, a boost in brainpower is all apes need to be able to speak like humans. UA primatologists Dieter and Netzin Steklis discuss the likelihood of this scenario.
Alexis Blue
,
University Communications
July 18, 2017
Resources for the Media
Husband-and-wife researchers Dieter and Netzin Steklis have spent years in the field studying silverback gorillas and other primates.

"War for the Planet of the Apes," the latest movie in the enduring "Planet of the Apes" franchise, took the top spot at the box office on its opening weekend and is one of the biggest films of the summer.

As with all films in the franchise, which first launched in 1968, the plot of the 2017 movie is based largely on the assumption that apes could speak like humans if only they had a boost in brainpower — which, on the big screen, they receive via a manmade drug. But could apes really be just one pharmaceutical away from being able to talk like people?

It's an enduring debate among scientists: whether non-human primates could speak with a little more brainpower, or whether they lack the proper anatomical structure in their vocal tract to produce human-language sounds.

It's also an area of interest for University of Arizona primatologists Dieter and Netzin Steklis, who have spent decades working with apes, and lead the UA's summer Primate Studies Field School in Rwanda.

According to Lieberman's research, which uses models of primates' vocal tracts, monkeys and apes are unable to produce the range and succession of vowel sounds required for human speech because of the way their vocal tracts differ from humans'. Humans have a longer tract in the form of an L-shape that evolved with upright walking.

Fitch and his colleagues, on the other hand, argue that an L-shaped vocal tract is not necessary for vowel production. They concede that monkeys and apes don't have the full range of vowel production, and that if apes could talk, it would sound quite different from human speech. However, they believe the speech could still function as a meaningful language.

Dieter Steklis, a professor in the UA's School of Animal and Comparative Biomedical Sciences in the College of Agriculture and Life Sciences, and Netzin Steklis, a lecturer in the School of Animal and Comparative Biomedical Sciences and Department of Family Studies and Human Development, have done their own research on language and vocalizations in apes. They offered their perspectives on the debate, as well as their thoughts on why the "Planet of the Apes" movies continue to be so popular.

Q: What side of the debate do you fall on?

Dieter: As to the vocal tract limitations, I take a middle-of-the-road position: Monkeys and apes can produce more vowel sounds than Lieberman argues, but not sufficiently for recognizable human speech. In the new "Planet of the Apes" release, Caesar the chimp speaks, as do some of the other apes. The only suggestion of a limitation on their speech capacity is their somewhat breathy and halting speech, but it is otherwise fully intelligible as human speech. In the movie, other specializations in the brain or vocal tract are not considered to be relevant to the ape's capacity to produce speech. The idea that you just have to make the ape smarter and it will speak: not a credible scenario, I would argue.

Q: What has your research in this area shown?

Dieter: My research addressed the brain specializations for vocal production in humans and other primates. Based on this information, I proposed how human language and speech evolved. I concluded that contrary to a lot of earlier thinking, monkeys and apes do have the neurological capacity to voluntarily produce vocalizations, but still lack certain neurological specializations that humans have for language and speech production. This is a reason some, myself included, have suggested that language was first expressed via manual gestures and later through speech.

Netzin: I have spent a long time in the field in Central America and Africa recording and analyzing the vocalizations of monkeys and apes. As part of this interest, I have also carefully reviewed the various experiments that have been conducted in the past few decades attempting to teach great apes language. I have concluded that the apes' capacity for vocalization and conveying of meaning is more complex than previously thought, and we still have much to learn. For example, in studying mountain gorilla vocalizations, Dieter and I have discovered that they can produce infrasonic vocalizations — very deep calls that lie outside the range of human hearing. No other primate produces meaningful infrasonic vocalizations, so we are exploring its utility for gorillas. Seems to me these very deep vocalizations have a "Barry White" effect on nearby females! Nevertheless, I also think that the capacity for speech sound production is highly limited in other primates. This is why early attempts to teach chimpanzees to speak failed, while later studies using a gestural language — a form of American Sign Language — were far more successful.

One of the apes that has shown the greatest success in learning to use keyboard symbols for communicating with humans is a bonobo named Kanzi, who is one of the most enculturated apes on the planet. Yet Kanzi, who has given his best to imitate human speech sounds, to my ears does not reach the mark.

Q: Why do you think the "Planet of the Apes" movies continue to be so popular?

Dieter: They explore the human-animal divide. We've long known how closely apes are related to us, but we see them as animals and us as human. These movies humanize the ape, blurring the boundary. The apes, especially Caesar, are part human and part animal. For example, Caesar doesn't have good control over his emotions — the animal in him easily shows through, something the movie producers did intentionally. It's the same reason that the Jekyll and Hyde story perennially fascinates us. Jekyll and Hyde is a one-person chimera — half animal, with the emotion part, and half human, the rational part. Likewise, there is our fascination with King Kong. He is a chimera of sorts, too; he has tender emotions for a human female and yet can turn into a fearful monster.

Netzin: Since I study how different people view animals and nature, I think the "Planet of the Apes" movies appeal to people with high emotional empathy for animals and love of "unspoiled" nature. The movies are apocalyptic in their vision of the human future. The apocalypse is ushered in by human technology and the quest for power and control over nature, leading to our demise. This dystopic vision is also a recurrent theme in other movies and literature: Our separation and attempt to control nature leads to our destruction as a species. "Planet of the Apes" starts with our use of animals — apes — for research for human benefit. It is a statement of our dominion over nature, over all other living things. Of course, the ethics of using animals for research is a hotly debated topic; recall the 2015 ban on using chimps for research in the U.S. I think many viewers see the apes in the lab as the underdog, and are rooting for them. Their uprising is the proverbial revenge of the oppressed, the revenge of nature. Meanwhile, others really have no issue with a more instrumental view of animals, and just go for the action-packed fight scenes.

Q: How much real science do we see in these movies?

Dieter: These latest installments incorporate a fair amount of science, especially compared to the earlier "Planet of the Apes" movies. Andy Serkis, who plays Caesar in the new movie, spent much time studying the behavior and vocalizations of chimps and gorillas, so the movements and even facial expressions are very realistic. His portrayal of that breathy speech introduces the notion that breath control is important as well. Also, it's interesting that the apes, especially Caesar, become progressively more fully bipedal, despite their ape anatomy — very long upper limbs compared to humans. This perhaps suggests the course of human evolution in fast-forward. Caesar gets a boost in intelligence pharmacologically, walks upright, speaks and even shows reflective thought — something living apes only do in a rudimentary way because they lack specializations for it in their brains' frontal lobes.

Netzin: The latest "Planet of the Apes" movies nicely and accurately bring out scientifically established differences in ape personality. The study of animal personality is a relatively recent field, but we know much now about how the great ape species differ in their personalities and how these differences relate to their social systems and ecology, which are very different. Compared to gorillas, for example, chimps are more Machiavellian — more scheming, more dominant and more power/authoritarian-oriented. Dieter and I motivated and were involved in the first study of wild mountain gorilla personality a few years ago, and the movie does a good job capturing gorilla and chimp personality.

And what about those equestrian skills of the apes? Here, I really have to practice my suspension of disbelief. As a horse owner and rider, I know how much cognition and emotional regulation it takes. While I can image a planet of the apes, I'm not sure I can imagine a planet of horse-whispering apes.