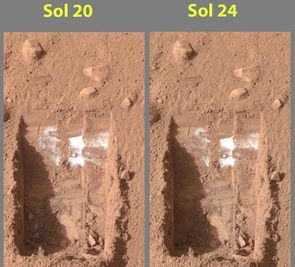 These color images were acquired by NASA's Phoenix Mars Lander's Surface Stereo Imager on the 21st and 25th days of the mission, or Sols 20 and 24 (June 15 and 19, 2008). These images show sublimation of ice in the trench informally called "Dodo-Goldilocks" over the course of four days. In the lower left corner of the left image, a group of lumps is visible. In the right image, the lumps have disappeared, similar to the process of evaporation. (Credit: NASA/JPL-Caltech/University of Arizona/Texas A&M University)

Scientists relishing confirmation of water ice near the surface beside NASA's Phoenix Mars Lander anticipate even bigger discoveries from the robotic mission in the weeks ahead.

"It is with great pride and a lot of joy that I announce today that we have found proof that this hard bright material is really water ice and not some other substance," said Phoenix Principal Investigator Peter Smith of The University of Arizona, during a Friday news briefing to announce the confirmation of water ice.

"The truth we're looking for is not just looking at ice. It is in finding out the minerals, chemicals and hopefully the organic materials associated with these discoveries," said Smith.

The mission has the right instruments for analyzing soil and ice to determine whether the local environment just below the surface of far-northern Mars has ever been favorable for microbial life. Key factors are whether the water ever becomes available as a liquid and whether organic compounds are present that could provide chemical building blocks and energy for life. Phoenix landed on May 25 for a Mars surface mission planned to last for three months.

"These latest developments are a major accomplishment and validation of the Mars program's 'follow-the-water' exploration framework," said Doug McCuistion at NASA Headquarters, Washington, director of the space agency's Mars Program. "This specific discovery is the result of an outstanding team working with a robust spacecraft that has allowed them to work ahead of their original science schedule."

The key new evidence is that chunks of bright material exposed by digging on June 15 and still present on June 16 had vaporized by June 19. "This tells us we've got water ice within reach of the arm, which means we can continue this investigation with the tools we brought with us," said Mark Lemmon of Texas A&M University, College Station, the lead scientist for Phoenix's Surface Stereo Imager camera. Lemmon said the disappearing chunks could not have been carbon-dioxide ice at the local temperatures because that material would not have been stable for even one day as a solid.

The disappearing chunks were in a trench to the northwest of the lander. A hard material, possibly more ice, but darker than the bright material in the first trench, has been detected in a second trench, to the northeast of the lander. Scientists plan next to have Phoenix collect and analyze surface soil from a third trench near the second one, and later to mechanically probe and sample the hard layer.

"We have in our ice-attack arsenal backhoeing, scraping and rasping, and we'll try all of these," said Ray Arvidson of Washington University in St. Louis, lead scientist for Phoenix's Robotic Arm.

Phoenix Project Manager Barry Goldstein of NASA's Jet Propulsion Laboratory in Pasadena, Calif., reported that an issue reported earlier this week related to producing thousands of duplicate copies of some file-maintenance data files has been diagnosed, and a corrective software patch will be sent to Phoenix within a few days.

Science operations continue in the meantime, though all data collected must be relayed to Earth on the same Martian day it is collected, instead of being stored to non-volatile memory when Phoenix powers down to conserve energy during the Martian night.

Images sent back Friday morning from Mars showed that the doors to the No. 5 oven on the Thermal and Evolved-Gas Analyzer opened part way. The instrument team is working to understand the consequences of this action.

The Phoenix mission is led by Peter Smith of the UA with project management at JPL and development partnership at Lockheed Martin, located in Denver. International contributions come from the Canadian Space Agency; the University of Neuchatel, Switzerland; the universities of Copenhagen and Aarhus, Denmark; Max Planck Institute, Germany; and the Finnish Meteorological Institute. For more about Phoenix, visit: http://www.nasa.gov/phoenix and http://phoenix.lpl.arizona.edu.