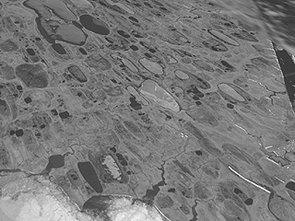 This Landsat image shows a field of egg-shaped lakes on Alaska’s North Slope that covers 20,000 square miles – an area about twice as large as Massachusetts. Photo credit: NASA.

The thousands of oval lakes that dot Alaska's North Slope are some of the fastest-growing lakes on the planet. Ranging in size from puddles to more than 15 miles in length, the lakes have expanded at rates up to 15 feet per year, year in and year out for thousands of years. The lakes are shaped like elongated eggs with the skinny ends pointing northwest.

How the lakes grow so fast, why they're oriented in the same direction and what gives them their odd shape has puzzled geologists for decades. The field of lakes covers an area twice the size of Massachusetts, and the lakes are unusual enough to have their own name: oriented thaw lakes.

"Lakes come in all sizes and shapes, but they're rarely oriented in the same direction," said Jon Pelletier, an assistant professor of geosciences at The University of Arizona in Tucson.

Now Pelletier has proposed a new explanation for the orientation, shape and speed of growth of oriented thaw lakes. The lakes' unusual characteristics result from seasonal slumping of the banks when the permafrost thaws abruptly, he said. The lakes grow when rapid warming melts a lake's frozen bank, and the soggy soil loses its strength and slides into the water. Such lakes are found in the permafrost zone in Alaska, northern Canada and northern Russia.

"We knew about the thaw slumping, but we didn't know it had to do with the shape of the lakes," Pelletier said. His new mathematical model describing the formation of oriented lakes by thaw slumping will be published on June 30 in the Journal of Geophysical Research.

Pelletier's interest in oriented lakes was sparked by teaching geomorphology, the study of landforms. "'Oriented lakes' is one of the classic subjects that comes up in class. There was a textbook explanation that I didn't find convincing, so I decided to tinker around with alternative models."

Pelletier does his tinkering by plugging mathematical equations into a computer.

On Alaska's North Slope, the prevailing winds blow perpendicular to the long axes of the lakes. According to the traditional explanation, such winds set up currents within the lakes that erode the banks, particularly at the lakes' ends. Such currents would erode coarse-grained, sandy soils faster than fine-grained clay soils.

According to Pelletier, one key ingredient for oriented thaw lakes is permafrost  the special mixture of soil and ice that forms the surface of the land in the Far North. On the north coast of Alaska and at similar latitudes throughout the world, the top, or active, layer of the permafrost melts at some point in the summer and refreezes again in the fall.

If the temperature warms gradually, the ice portion of the permafrost melts slowly, allowing the water to drain out of the soil and leave relatively firm sand or sediment behind. However, if an early heat wave melts the permafrost's ice rapidly, the result is a soggy, unstable soil. When such rapidly thawed permafrost is part of the vertical bank of a lake, the bank slumps into the water, enlarging the lake. More of the bank collapses if the soil is fine-grained, rather than sandy.

Another ingredient in Pelletier's explanation is a long, gentle slope. Because Alaska's oriented lakes are embedded in a gently sloping landscape, the downhill end of a lake always has a shorter bank. According to Pelletier's computer model, shorter banks melt more and have bigger slumps. Therefore when the lake experiences thaw slumping, Pelletier's model says the lake grows more in the downhill direction than it does uphill, generating the lakes' characteristic elongated-egg shape.

To test his thaw-slumping model against the wind-erosion model, Pelletier used satellite images to create a database that describes 1,400 of northern Alaska's oriented lakes. When he compared them by size and soil type, he found that more big lakes occurred on fine-grained soil, providing support for the idea that thaw slumping, not wind, formed the lakes.

Moreover, some small portion of the lakes are not oriented perpendicular to the wind, as is required for wind erosion to be the main force forming the lakes.

Pelletier's analysis of the database also shows that larger lakes generally have lower banks, another prediction of the thaw-slumping model.

Now that he's verified that thaw-slumping, not wind, is the driving force behind the formation of Alaska's North Slope lakes, Pelletier's next step is seeing whether the lakes have indeed grown more in the downhill direction, as his model predicts.

"It's so simple and low tech," he said. "It can be done by comparing aerial photos over time but no one's done it. There are a lot of photos from past decades."