H3+: The Molecule that Made the Universe

In a study that pushed quantum mechanical theory and research capabilities to the limit, UA researchers have found a way to see the molecule that likely made the universe - or at least the hot and fiery bits of it.
Shelley Littin
,
NASA Space Grant intern, University Communications
April 11, 2012
Resources for the Media 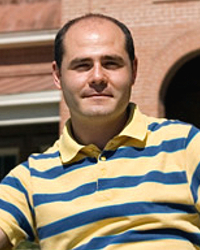 While a doctoral candidate at the UA, Michele Pavanello, shown here in front of Old Main, was part of a study that could lead to new insight on how the universe's first stars formed. "We could do this research in Arizona not just because we happened to be there," he said, "but because the UA has these great facilities." (Photo courtesy of Michele Pavanello) 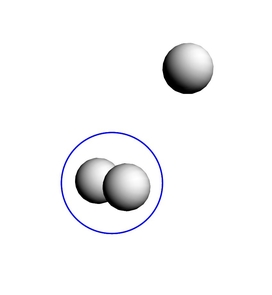 However, in the presence of the radiation that pervades interstellar space, H3+ can gain energy that causes it to vibrate and lose its symmetry. Here, the electrons are shared among only two of the hydrogen atoms. Asymmetries such as these allow the molecule to emit light and cool down forming stars. (Image courtesy of Michele Pavanello) 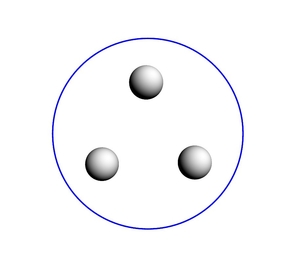 Left to its own devices and unaltered by interstellar radiation, H3+ would have a symmetric structure, with two electrons shared equally among three hydrogen atoms. (Image courtesy of Michele Pavanello)
The molecule known as H3+ is believed to have had a vital role in cooling down the first stars of the universe, and may still play an important part in the formation of current stars. Above, new stars burst into being in the star-forming nebula Messier 78, imaged by NASA's Spitzer Space Telescope. (Image credit: NASA/JPL-Caltech)

Lurking in the vast, chilly regions between stars, the unassuming molecule known as a triatomic hydrogen ion, or H3+, may hold secrets of the formation of the first stars after the Big Bang.

At the University of Arizona, then doctoral candidate Michele Pavanello spent months doing painstaking calculations to find a way to spot H3+ and unveil its pivotal role in astronomy and spectroscopy, supervised by Ludwik Adamowicz, a professor in the UA's department of chemistry and biochemistry.

The groundbreaking results have been published in a recent edition of Physical Review Letters.

"Most of the universe consists of hydrogen in various forms," said Adamowicz, "but the H3+ ion is the most prevalent molecular ion in interstellar space. It's also one of the most important molecules in existence."

Believed to be critical to the formation of stars in the early days of the universe, H3+ also is the precursor to many types of chemical reactions, said Adamowicz, including those leading to compounds such as water or carbon, which are essential for life.

Early stars would have become hotter and hotter until they exploded before they ever formed, according to Pavanello, unless there was a way to release some of that pent-up energy.

"There wouldn't be any star formation if there weren't molecules that slowly cool down the forming star by emitting light," said Pavanello. Not many molecules can do that, he added, partly because very few molecules existed in the early days of the universe.

"Astronomers think that the only molecule that could cool down a forming star in that particular time is H3+."

Another molecule, molecular hydrogen, would have been present, but it would have had a much harder time cooling a forming star than H3+. "Hydrogen does not like to emit light, while H3+ can bend and vibrate, and in doing so it is able to emit light." said Pavanello.

H3+ is an electrically charged molecule, called an ion. It consists of three hydrogen atoms with only two, as opposed to a healthy three, electrons to share between them. Lacking a negatively charged electron, the molecule takes on a plus-one positive charge.

H3+ has a triangular shape, explained Adamowicz. "As it is excited it starts to vibrate in various ways."

"One has to involve a large amount of computations at the quantum mechanical level to predict those vibrations," said Adamowicz. "The role of theory is essentially to simulate those vibrations in the computer and then describe how the molecule is swinging or dancing."

Understanding the various vibrations of H3+could help astronomers deduce to what extent it played a role in the formation of the early stars.

"In the 1990s, H3+ was observed surrounding stars," said Adamowicz. "The stars emit radiation, which not only contributes to the production of H3+ but also excites the molecule to higher energy states. The molecule can also become excited through leftover energy from chemical reactions it was involved in or through collisions with other molecules. In the process of de-excitation the molecule emits photons that are detected by our radio telescopes."

"That can only happen with H3+ because molecular hydrogen is too symmetric," said Pavanello. "And so H3+ has a very important cooling function in the formation of the first stars after the Big Bang."

"The only way we can predict how the stars form is if we know very well what the cooling abilities of H3+ are, and we cannot know its cooling ability until we know its vibrational spectrum. We need to know what these energy levels are," said Pavanello.

"With this paper we have pinpointed the energy levels up to a certain energy threshold that is already good enough to generate accurate predictions of the cooling ability of H3+," said Pavanello.

It happened almost by chance

The group didn't set out to unlock the secrets of H3+, said Pavanello, who graduated from the UA in 2010 with a prestigious Marie Curie post-doctoral fellowship that took him to Leiden University in the Netherlands. He is now an assistant professor of theoretical chemistry at Rutgers University in Newark, N.J.

"It all happened almost by chance," he said. "A friend of the mass-spectrometry facility in the UA's chemistry department happens to be a very good quantum chemist from Hungary. He once visited the department and talked to Ludwik about the possibility to do some H3+ calculations. At the time, I had just started. The code I was writing was almost done, and we thought H3+ could be a good system on which to test this code."

The researchers input a computer code into super computers at the UA's High Performance Computing Center that described the ways in which H3+ vibrates according to quantum mechanical principles. "We couldn't have done this without their support," said Pavanello.

Depending on the level of approximations made in the computer code, said Pavanello, the researchers can develop software that can describe the motion of small molecules very well, or large molecules very approximately.

"We decided to implement something that had essentially no approximations, but of course with the price that we can only apply it to very small molecules," said Pavanello. "Our method simply did not exist before in a mainstream form."

The UA team's results were corroborated by teams from Hungary, France, London and Russia, and also by experiments done at the Max-Planck Institute in Heidelberg, Germany that created H3+ in a laboratory and verified that its spectral lines matched the predictions.

The UA team's contribution allowed the researchers for the first time to assign spectral lines of H3+ to particular types of the vibrational motions as the ion releases photons with near-visible wavelengths. These wavelengths contribute to the color of the light H3+ radiates toward us from interstellar space.

The colors of the universe

"We are at a point in which we see many, many more spectral lines than we can possibly identify, and we don't know what these lines mean," said Pavanello.

Knowing the vibrational levels, and therefore the spectral lines of H3+, will allow astronomers and astro-chemists to sift through the inundation of spectral lines and further identify the elemental composition of objects in space.

It also allows scientists to predict the cooling abilities of H3+, and generate a possible scenario for how the first generation stars formed after the Big Bang, said Pavanello. "We now have an important piece of the puzzle needed to embark on reliable modeling of the formation of the first stars."