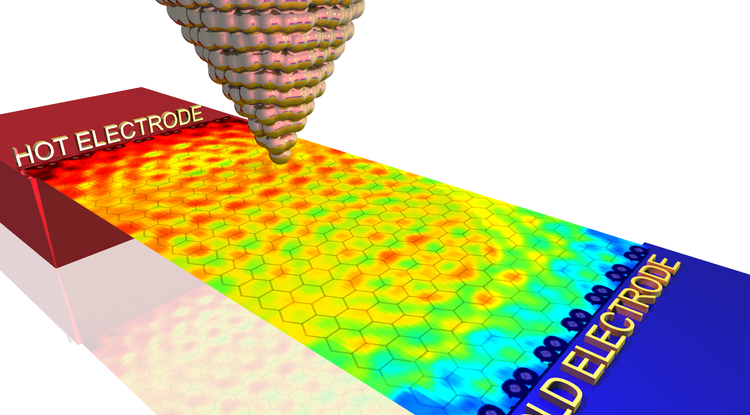 In the strange world of graphene, ultrathin sheets of carbon resembling chickenwire on a nanoscale, electrons carrying heat between two electrodes propagate as two-dimensional quantum waves, UA researchers have discovered. Instead of dissipating evenly throughout the material, heat "goes quantum" and creates persistent hot and cold spots, which can be measured with the superfine tip of a thermal microscope. (Illustration: Charles Stafford)

A UA-led collaboration of physicists and chemists has discovered that temperature behaves in strange and unexpected ways in graphene, a material that has scientists sizzling with excitement about its potential for new technological devices ranging from computing to medicine.
Daniel Stolte
,
University Relations – Communications
March 5, 2015
Resources for the Media

Imagine setting a frying pan on the stove and cranking up the heat, only to discover that in a few spots the butter isn't melting because part of the pan remains at room temperature. What seems like an impossible scenario in the kitchen is exactly what happens in the strange world of quantum physics, researchers at the University of Arizona have discovered.

The findings, published in the scientific journal Physical Review B, suggest that quantum effects play a role in how heat moves through a material, challenging that classic notion that heat simply diffuses from a hot spot to a cold spot until the temperature is the same throughout.

Quantum temperature control on a microscale level could someday enable new technologies — for example, in computing, environmental monitoring and medicine.

"Nobody has seen these quantum effects in the propagation of temperature before," said Charles Stafford, a professor in the UA's Department of Physics who co-authored the paper. "Heat diffusion has always been thought of as a process that you can't affect. Ordinarily, a pattern of hot and cold spots within a material would be washed out by the inexorable flow of heat from the hot spots to the adjacent cold spots."

Not in the strange world of graphene. The material — a sheet of carbon atoms linked in a hexagonal, chicken-wire structure — holds great promise for microelectronics. Only one atom thin and highly conductive, graphene may one day replace conventional silicon microchips, making devices smaller, faster and more energy-efficient. In addition to potential applications in integrated circuits, solar cells, miniaturized bio devices and gas molecule sensors, the material has attracted the attention of physicists for its unique properties in conducting electricity on an atomic level.

"We found that electrons carrying heat propagate as two-dimensional quantum waves," Stafford said, "and the ripples in those waves are predicted to lead to hot and cold spots that persist, flying in the face of our everyday understanding of temperature and heat flow."

What's more, "the size of these ripples is controllable in graphene, so that this strange phenomenon should be observable with state-of-the-art scanning thermal microscopes, offering a unique vista into the nature of temperature and heat transport at the quantum level," the authors write.

"In other words, this is not just some conceptual result, but you should be able to observe this phenomenon with current lab techniques," Stafford said.

After predicting similar types of temperature waves along single molecules — too small for technological applications — in computer simulations published previously, Stafford and his team now provide the basis for observing quantum heat transfer with available technology.

"Under certain conditions, one could make these wavelengths 20 nanometers or more, well in the realm of current resolution of scanning thermal microscopy," Stafford said.

While the authors emphasize that their paper is not about immediate applications, the discovery of hot and cold spots coexisting in the same sheet of graphene could offer ways to use graphene as a quantum heat conductor to cool electronic devices.

"As devices get smaller and smaller, there is a big push in technology to be able to manage temperature at a nanoscale level," Stafford said. "For example, if we want to improve processing hardware, we need to understand the flow of heat at that level, and that requires us to bring our understanding from the blackboard of theoretical physics to being recognized in a lab setting."

Nanometer resolution temperature measurements are technologically necessary, for instance, to characterize the thermal performance and failure mechanisms of semiconductor devices, or to investigate bioheat transfer at the molecular level for the treatment of cancer or cardiovascular diseases.

"Through quantum heat transport, it should be possible to achieve spot cooling on the microscale level that would be impossible to achieve by classic heat transport," Stafford explained. "In a typical computing architecture of two-dimensional chips, you have to drain excess heat along the edges, and that becomes more and more difficult as everything becomes smaller and smaller. If instead of having to cool the whole structure you could selectively cool certain microscopically small processes on the chip, it would be a great advantage."

The research was done in collaboration with Justin Bergfield, who earned his doctorate in Stafford's lab in 2010 and is now a postdoctoral fellow at Northwestern University in Evanston, Illinois; Mark Ratner, also at Northwestern; and Massimiliano Di Ventra at the University of California, San Diego.