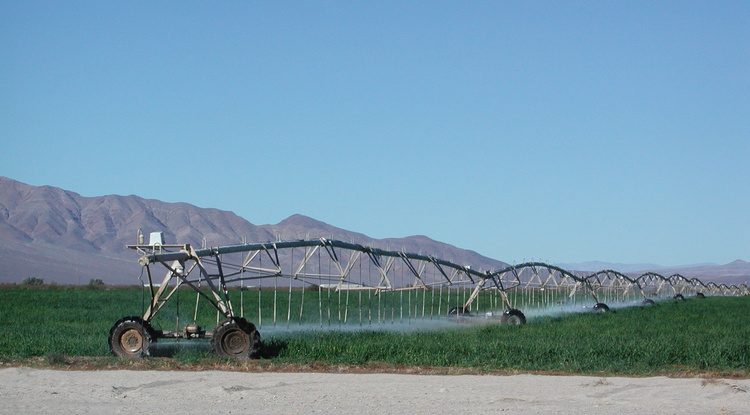 List of authors for "Implications of projected climate change for groundwater recharge in the Western United States":

This graphic shows various ways that water can reach and recharge a groundwater aquifer: precipitation that percolates directly down into the aquifer; recharge from streams or runoff; water that percolates deep into the soil as a result of crop irrigation; and recharge from melting snowpack and from mountain streams that flow into the valley below. (Image courtesy of David Stonestrom/U.S. Geological Survey) 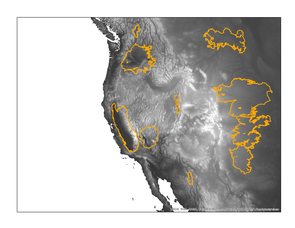 The orange lines delineate the eight groundwater aquifers UA hydrologist Thomas Meixner and his colleagues studied to see how climate change will affect groundwater in the Western U.S. (Image courtesy of UA Department of Hydrology)

By 2050, climate change will increase the groundwater deficit even more for four economically important aquifers in the Western U.S., reports a University of Arizona-led team of scientists.

The new report is the first to integrate scientists’ knowledge about groundwater in the American West with scientific models that show how climate change will affect the region.

"We wanted to know, 'What are the expectations for increases and decreases in groundwater as we go forward in this century?'" said lead author Thomas Meixner, a UA professor and associate department head of hydrology and water resources. "In the West, 40 percent of the water comes directly from groundwater."

"Aquifers in the southern tier of the West are all expected to see slight-to-significant decreases in recharge as the climate warms," Meixner said.

Groundwater already is being withdrawn from the aquifers of California’s Central Valley, the central and southern portions of the High Plains and Arizona’s San Pedro faster than the groundwater is being recharged.

Climate change will make the groundwater deficits worse in those aquifers, the researchers report.

For the Death Valley and Wasatch Front aquifers, the effect of climate change on the balance between usage and recharge isn’t so predictable.

In contrast, Western aquifers at about the latitude of Boulder, Colorado, and farther north are likely to be recharged faster than people withdraw the water, the team reports. The northern aquifers the researchers studied are the northern High Plains, the Spokane Valley, the Williston Basin and the Columbia Plateau.

"In the long term, pumping has to equal recharge. You can get there through slow social adjustment. You could slowly decrease water withdrawal by conservation and efficiency," Meixner said. "Or you can hit bottom and have farm abandonment and dry wells.

"It’s a social decision as to who gets the water," he said. "The southern regions of the Western U.S. must be prepared to adapt to a much drier future."

The team’s research article, "Implications of projected climate change for groundwater recharge in the Western United States," is now online (http://dx.doi.org/10.1016/j.jhydrol.2015.12.027) and scheduled for publication in the March issue of the Journal of Hydrology. Christopher Castro, UA associate professor of atmospheric sciences, is a co-author.

The report is an outgrowth of a workshop held at the U.S. Geological Survey’s John Wesley Powell Center for Analysis and Synthesis. The National Science Foundation and USGS funded the workshop.

To synthesize existing knowledge and predict how climate change would affect Western groundwater, Meixner gathered 16 experts in climate change and in hydrology of the Western U.S.

Predictions at the major river basin or several-state level can be useful for developing water policy, the team wrote. However, the team found predictions from existing studies were either at a global scale or at the local level, not at the regional level.

To create regional-scale predications, the scientists synthesized existing studies and applied current knowledge of recharge processes. The team studied eight economically important Western aquifers for which studies about their groundwater recharge budgets existed. In addition, models of how climate change would affect recharge were available for four of the aquifers.

In contrast, human behavior has a much smaller effect on diffuse and mountain-systems recharge. Diffuse recharge comes from the precipitation that falls on a specific spot and then percolates down into the groundwater.

Much of the mountain-systems recharge comes from snowpack, Meixner said. As the snow melts, the water fills mountain streams that end up in the flatlands below. Snowmelt also can percolate into the soil and eventually reach the valley below as the water moves downhill through the bedrock underlying the mountains.

The San Pedro aquifer in southeastern Arizona is one example of an aquifer where the human use of groundwater will increasingly outstrip recharge as the climate warms, the researchers report. Much of the San Pedro’s current recharge comes from mountain-system recharge, which the scientists expect will dwindle as more precipitation falls in the mountains as rain rather than snow and as the region dries.

When more groundwater is pumped than is replaced by recharge, rivers can be sucked dry, as happened to the Santa Cruz River in Tucson, Meixner said. Once the Santa Cruz flowed year-round; now in Tucson the river has water only after heavy rains.

"What you would expect to see is that climate change will exacerbate problems in the Southwest on the recharge end," Meixner said.

"Our study reveals that the Western U.S. needs to redouble efforts to manage water resources to maximize benefits to individuals and society," he said. "We can’t be wasting water."