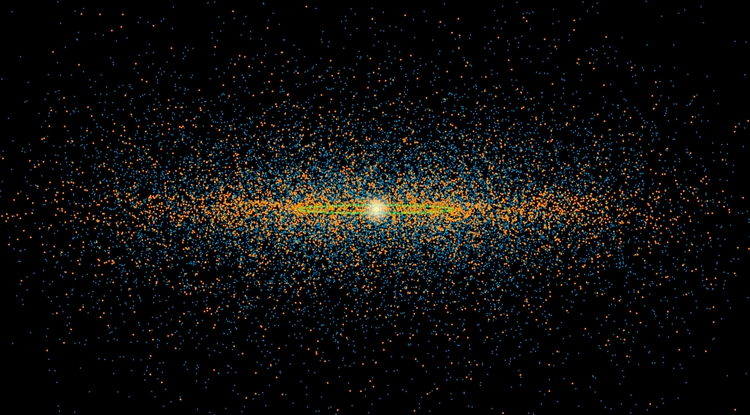 New results from NASA's NEOWISE survey find that more potentially hazardous asteroids are closely aligned with the plane of our solar system than previous models suggested. At the UA, researchers are working to improve methods for detecting hazardous asteroids. (Photo credit: NASA/JPL-Caltech)

Alon Efrat and Jonathan Myers of the UA computer science department are working under a new grant to help improve methods for discovering asteroids on paths toward Earth.
La Monica Everett-Haynes
,
University Communications
Dec. 3, 2012
Resources for the Media 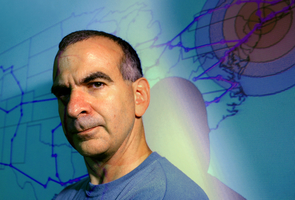 Helping to inform the next phase in asteroid detection, a University of Arizona team has set out to develop new tracking methods and computer algorithms, joining scientists across the nation working to spot asteroids headed for a close pass-by or impact with Earth.

UA computer scientists Jonathan Myers and Alon Efrat will work directly with the Minor Planet Center, the MPC, located at the Smithsonian Astrophysical Observatory in Massachusetts.

The two will be improving existing software and algorithms utilized by the MPC, the world's authority on asteroids and comets in our solar system, providing orbits and observational data to astronomers around the globe.

"In the last 10 years, there have been so many changes with hardware, and now everyone has a GPU (graphics processing unit) in their laptops," said Efrat, a UA associate professor of computer science and Myers' adviser.

"But the programming and algorithms should be revisited, along with the databases, in ways that are useful to the asteroid problem," Efrat said.

It is a concern not only within the scientific community, but the nation's government.

At the UA, staff members with the Catalina Sky Survey also are on the hunt for potentially hazardous asteroids. In fact, the UA-based site is a record setter for detecting near-Earth objects compared with other sky surveys.

And as part of the NASA Authorization Act of 2005, Congress charged NASA with to detecting, tracking, cataloging and characterizing more than 90 percent of near-Earth objects at least 140-meters in diameter, or about 460 feet. The deadline: 2020.

"These objects are large enough to level a city or possibly do widespread damage to a small country," said Myers, a doctoral student in the UA's computer science department who is taking the lead on data analysis under the project.

"But one of the primary challenges in finding objects of this size is that we need better instruments in order to detect them," Myers said.

The search for near-Earth objects remains a hybrid method involving robotics surveys and human observations, which gets back to the issue of noise. There still remains some difficulty in differentiating noise from actual objects.

That's where computer scientists step in.

MPC is supporting Myers and Efrat with a three-year, $193,000 grant with funds provided by the NASA Near Earth Observations Program.

In developing high-performance computing techniques and algorithms, along with parallel computing techniques, Myers and Efrat ultimately plan to design new software for discovering new and unknown asteroids that would benefit MPC and sky surveys elsewhere. The two UA researchers also intend for their work to inform others attempting to coordinate multiple telescopes for asteroid detection.

The researchers contend that improving methods for analyzing the MPC's data – especially by way of optimizing and synthesizing databases – could result in discoveries of new asteroids previously buried in the "noise," which represents nonessential signals.

"The search space is enormous, and it might look like a lot of sky, but it emits so little light," Efrat said.

Observations on a single object must be made time and time again. But the improvements computing techniques Efrat and Myers are proposing could help reduce the many validation efforts while leading to more precise measurements, reducing the problem of noise.

And it will happen electronically.

"Increasingly, computers and robotic telescopes are recording when and where objects were seen," said Myers, who previously worked with the LSST on a project tracking and discovering objects.

"Looking forward to the future, it's going to be an entirely automated process one day," Myers also said. "The amount of data will grow drastically."

Also, Myers said that beyond concerns about a potential cataclysmic event resulting from an asteroid collision, there exist other benefits to being able to better harness existing and new data related to the movement of asteroids.

"Studying solar science helps us to understand the history of our solar system, how it developed and how it came to be," Myers said. "It is one powerful tool to help us understand how stars grow, how planets are formed and how we have come to be."