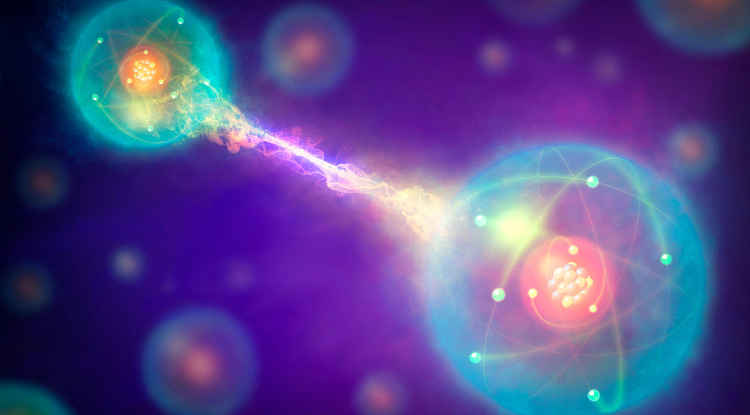 Interdisciplinary UA Researchers Get Tangled Up in Quantum Computing

UA researchers are building a quantum hub known as Inquire, which will be the world's first shared research and training instrument to help researchers in diverse fields benefit from quantum resources.
Emily Dieckman
,
UA College of Engineering
Jan. 25, 2019
Resources for the Media

Good neighbors often share resources: a cup of sugar, extra lawn chairs, a set of jumper cables. Researchers across campus at the University of Arizona will soon be able to share a less common – and far more valuable – resource to help them further their research: entangled photons, or interlinked pairs of light particles.

With approximately $1.4 million in funding – $999,999 from the National Science Foundation and about $400,000 from the UA – professor Zheshen Zhang is leading the construction of the Interdisciplinary Quantum Information Research and Engineering instrument, known as Inquire, at the UA. Inquire is the world's first shared research and training instrument to help researchers in diverse fields – including those with no expertise in quantum information science – benefit from quantum resources.

A network of fiber-optic cables will connect an automated quantum information hub in the basement of the Electrical and Computer Engineering building to four other buildings on campus: Biosciences Research Labs, Mines and Metallurgy, Physics and Atmospheric Sciences, and Meinel Optical Sciences.

"One of the joys of the UA is collaborating with top scholars working in cutting-edge fields," Barton said. "It seems like science fiction, but Zheshen is building a facility that will create quantum-entangled photons, then deliver them via fiber optics halfway across campus, right into the Translational Bioimaging Resource in the Biosciences Research Labs building."

"This is an exciting project that perfectly represents some of the key themes underlying our strategic plan," said UA President Robert C. Robbins. "To be a leader in the Fourth Industrial Revolution, we must leverage collaboration, stay ahead of the technology curve and provide a high-powered environment where researchers have the tools they need to solve the world's grand challenges. I look forward to seeing the new opportunities this facility brings once it is completed."

Construction on the project already has begun. The expected completion date is September 2021.

Much like an atom is the smallest unit of matter, a photon is the smallest unit of light. So, while we can see the light of tens of billions of photons in a room lit by a lamp or a courtyard lit by the sun, the human eye – and most microscopes – can't see individual photons. But sometimes this too-small-to-see information can be important. For example, a biomedical engineering lab might be doing an imaging study on a protein or an organic molecule that's emitting a signal too weak for traditional cameras to see.

"You can send your photons to the core facility, which is equipped with an array of ultrasensitive cameras that can see things at the single photon level," Zhang said.

Traditionally, researchers used high-powered lasers to illuminate these biological samples, which were sometimes damaged in the process. Using entangled photons as an illumination source provides higher sensitivity, less illuminating power, and the same – or even higher – resolution.

"Two entangled photons can be worth a million of their classical brethren, potentially allowing us to image deeper without harming tissue," Barton said.

These fiber-optic cables are a two-way street. Researchers can send their photons into the central hub to be imaged by the high-tech microscopes, but the center can also share entangled photons with labs across campus.

Entangled photons are interlinked pairs. Even when they're separated by large distances, anything that happens to one photon in an entangled pair will be transferred to the other one as well.

This relationship has several uses. For example, researchers can use photons as probes to help determine the nature of unidentified materials. The changes a material introduces to a photon, such as a change in color, provide clues to the material's identity. When one entangled photon in a pair is used as a probe, the material introduces changes to both photons in the entangled pair.

"Now you can perform a measurement on both photons to learn about the sample being probed," Zhang said. "You can have twice as much information about the way the material is affecting the photon."

Entangled photons can also be used in quantum communication, a secure method of sending and receiving data that's designed to preclude eavesdropping. It works like this: Before Party A shares any sensitive information with Party B, Party A sends a "quantum key," a series of entangled photons that serves as the code for decrypting future transmissions. Quantum keys are designed so that the very act of decrypting or reading their contents changes their contents.

Party A and Party B in the above example don't need to be quantum information scientists. Researchers across all kinds of disciplines can benefit from the unique features of entangled photons, and Inquire's aim is to allow for just that.

"This is a key area that the National Science Foundation identifies as one of its 10 Big Ideas and really wants to push forward because it is so interdisciplinary," Zhang said. "It involves researchers across the boundaries of science, engineering, computer science, physics, chemistry, math, optics – everywhere. The key question is 'How can everybody speak the same language, and how can they benefit from the progress made in other areas?'"