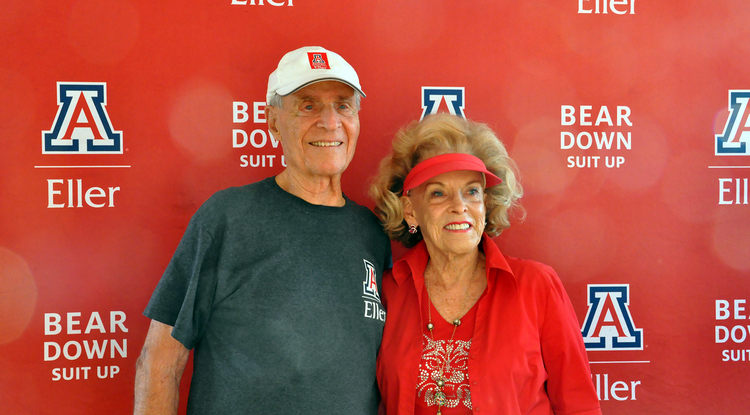 His support of student programs, athletics and advancing the UA's aspirations changed the face of the university.
Liz Warren-Pederson
,
UA Foundation
March 11, 2019
Resources for the Media

The University of Arizona lost an alumnus, advocate and supporter of national stature with the passing of Karl Eller on Sunday.

"Karl Eller was a true pillar of this community and an inspiration to the many people whose lives were positively impacted by his generosity, dedication and Wildcat spirit," said UA President Robert C. Robbins. "The University of Arizona is incredibly fortunate to carry on his legacy through our students in the Eller College of Management and programs throughout our campus for many generations to come. His decades of leadership and philanthropy have been nothing short of transformative, and he will be remembered and missed by all who had the pleasure of knowing him."

Among the many ways Eller served the university was his participation on the steering committee for the UA's first billion-dollar campaign.

"If there's one thing I've learned over my years of working with Karl, it's that the goal of his philanthropy has always been to give students the same opportunities he had," said John-Paul Roczniak, president and CEO of the University of Arizona Foundation. "Growing up on Sixth Street, he looked across the street to Arizona Stadium and the University of Arizona, and saw it as his gateway to the world. He knew that if he just got his education, he could make a better life for himself. So many times, we'd be driving to games and he would say to me, 'Look at all these kids, JP. They have the whole world in front of them.'"

"What an honor it has been to know Karl Eller. He used his education, intelligence and a deep commitment to integrity to achieve the highest levels of success, while always keeping a little bit of Tucson ruggedness and authenticity," says Paulo Goes, dean of the Eller College of Management. "An extraordinary friend and benefactor, he was a role model for tens of thousands of students and hundreds of faculty and staff, who will forever have their names associated with Eller. Karl's legacy will live on through them."

Over the decades, Eller and his wife, Stevie, have contributed millions of dollars to the UA to found the entrepreneurship program, name the business school and support student career development, as well as teaching and research related to the free market economy. He served on the University of Arizona Foundation board of trustees for decades, as well as the Eller College National Board of Advisors, in which role he leveraged his corporate connections to bring in CEOs of major brands – including Coca-Cola, McDonald's and Intel – for the annual Executive of the Year event.

Eller was a member of the visionary group that brought the UA and Arizona State University into the PAC-12 conference, and he continued to support athletics at the UA and throughout the state, helping to bring the Fiesta Bowl as well as franchise basketball, football and hockey to Arizona – activities that contributed to his induction into the Arizona Sports Hall of Fame in 2013.

His connection to the UA was deeply personal.

In the mid-1930s, Eller and his family moved to Tucson from Chicago. He grew up across from Arizona Stadium, and his mother rented rooms to UA students. Eller – a born entrepreneur – contributed to the family finances through his paper route and, at the age of 8, as the official water boy of the UA football team.

Eller joined the Army in 1946, and after completing his service, came to the UA to study business. By that time a football player himself, he continued his entrepreneurial streak on campus, selling bottles of Coke out of a red wagon to students waiting in registration lines on hot August days. He also packaged and sold lecture notes to his classmates. These side hustles helped him save the funds he needed to purchase an engagement ring for the love of his life, Joan "Stevie" Stevens, a fellow Wildcat, whom he wed two days after graduation, in 1952.

The Ellers moved to Chicago, where Karl Eller took a position with the ad agency Foster & Kleiser. He moved up, later joining Needham, Louis & Brorby. But in 1961, he got a life-changing call from the president of Foster & Kleiser's outdoor division. The company was planning to sell its Western division, and thought Eller should consider the purchase. He made the leap.

Over the course of his career, Eller headed four billion-dollar companies, including Columbia Pictures, Gannett, Circle K and his own billboard company, Eller Media Co., which he founded on the strength of his integrity alone after personal and professional setbacks in the early 1990s. In 1997, he sold Eller Media Co. for $1.2 billion.

The seed of his UA involvement dated back to the purchase of his first billboard company. He told the Eller College alumni magazine that, back in 1961, he didn't have experience writing a business plan or finding investors. He found a lawyer and an accountant, and three months later completed the purchase and moved to Phoenix. "I said to myself at the time, 'I wish I had more education in this area. If I ever get a chance, I'd like to start an entrepreneurship program at the business school.'"

In 1984, he did just that. Now known as the McGuire Center for Entrepreneurship, the program Eller founded was one of the first university-based centers for entrepreneurship in the country. It has remained in the top ten of national programs since then, and its 2,000-plus graduates have launched hundreds of ventures. For more than 30 years, Karl attended the annual year-end competition as a judge, asking tough questions of the student teams who had the chance – unusual in higher education – to present in front of their college's namesake.

Eller is survived by his wife, Stevie, their two children, six grandchildren and one great-grandchild.

Photos and video for media: https://arizona.app.box.com/v/KarlEller