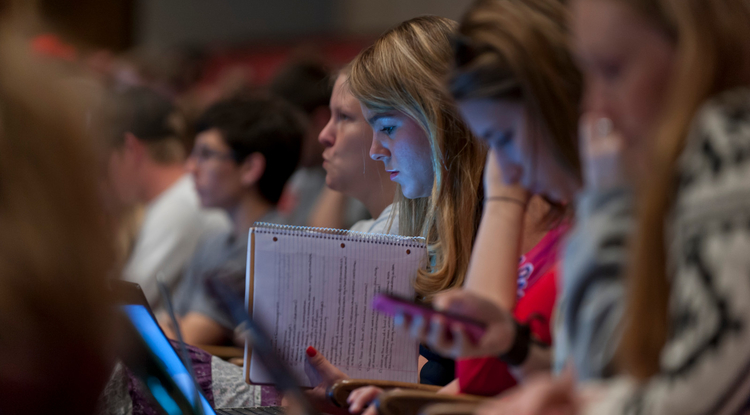 Based on preliminary data, the UA is welcoming more than 42,100 students for the fall of 2015.
University Relations - Communications
Aug. 24, 2015
Resources for the Media
Extra Info:

Major points about the fall 2015 class: 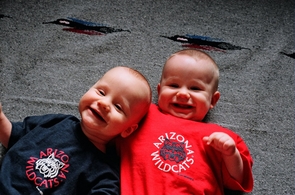 A photo of Andris and Marton Szep, taken in 1997 when the twin brothers were about 6 months. The Szeps decided to attend the UA together. (Photo courtesy of Szep family) 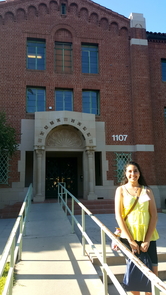 Kathia Antillon, who transferred in from high school with credits from Rio Salado Community College, is a UA student in STEM. (Photo courtesy of Kathia Antillon) 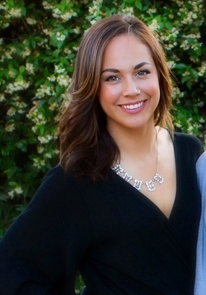 Under its 100% Engagement initiative, the UA promises all undergraduate students an opportunity to gain hands-on experience. "I chose the University of Arizona because of the countless opportunities available," said Riley Campillo, a neuroscience and cognitive science major from Folsom, California. (Photo courtesy of Riley Campillo)
Alex Stoken, named a 2015 Presidential Scholar by the U.S. Department of Education — one of the nation's highest honors for high school students, is a new UA freshman. (Photo courtesy of the UA Honors College)

Preliminary enrollment data show that the University of Arizona will welcome approximately 42,100 students for the fall and is on track to exceed several of its enrollment goals.

"This is the largest freshman class we have ever had," said Kasey Urquidez, the UA's vice president for enrollment management and dean of undergraduate admissions. "This is an exciting time for our University as we grow and increase opportunities."

Also, more than 40 percent of the new freshmen are ethnically or racially diverse, according to applications. Official enrollment figures are not available until the 21st day of class.

Preliminary data also indicate increases in the numbers of students choosing to study science, technology, engineering and mathematics, known as the STEM fields. About 34 percent of UA undergraduates have declared a STEM major this fall.

Under the charge of the campuswide Never Settle strategic plan, and with funding from the Leona M. and Harry B. Helmsley Charitable Trust through the Association of American Universities' STEM Undergraduate Education Initiative, the UA has introduced numerous new initiatives and programs over the last several years to reform STEM education and learning.

Incoming freshman Kathia Antillon, a National Merit Scholar, said she chose the UA because of its strengths in STEM.

Antillon will study chemistry, psychology and Spanish. She is on the research track and plans to be involved in the Honors College; Blue Chip Leadership, a nationally renowned foundational engagement program; and the Arizona's Science, Engineering and Mathematics Scholars Transfer, or ASEMS-T, Program.

Having transferred in with credits she accrued from Rio Salado Community College while in high school, Antillon is a member of the first cohort of the ASEMS-T Program. Earlier this year, Arizona's Science, Engineering and Mathematics Scholars received funding from the Sherman Fairchild Foundation to expand its traditional STEM training program specifically for transfers.

"Everyone I have come in contact with has been really helpful," said Antillon, a native of Avondale. " I am really excited to begin my time at the UA, and I know that these next four years will be great."

The estimated freshman SAT is 1126, with an average high school GPA of 3.4.

The Honors College is expecting nearly 1,500 incoming freshmen and transfers, with 18 percent being first-generation students. Of the transfer students, 42.6 percent are first-generation. The college's average freshman SAT is 1310, with an average high school GPA of 3.83.

Alex Stoken, a native of Tempe, was named a 2015 Presidential Scholar by the U.S. Department of Education — one of the nation's highest honors for high school students.

Stoken said he chose to attend the UA because of its faculty expertise in research related to string theory and supersymmetry.

"I felt that the UA is the perfect blend of both amazing campus experiences and cutting-edge research in areas that really interest me," said Stoken, who is majoring in physics and mathematics.

"The opportunity to study under such experts and learn from them as they make new discoveries is a dream come true," he said.

And with the workforce increasingly demanding diversified skill sets beyond the traditional markers of academic success, Urquidez pointed to numerous UA programs and initiatives designed to "ensure that our students are workforce ready and have a strong return on investment" after studying at the UA.

Of note, the 100% Engagement initiative — a major component and newly formalized policy under Never Settle — promises all undergraduate students an opportunity to gain hands-on experience in their chosen field before they graduate. Beginning this fall, students will be able to graduate with an "Engaged Learning Experience" notation on their official transcript.

"I chose the University of Arizona because of the countless opportunities available," said Riley Campillo, a neuroscience and cognitive science major from Folsom, California.

Campillo learned about the Student Alumni Ambassadors program during orientation and said she already has made connections with individuals in her programs.

"I believe that a huge part of having a successful experience in college is making connections with various people and having the willingness to share advice and knowledge," Campillo said. "It is exciting to be a part of a group of teachers and students who are excited to grow together."

While searching for schools in the U.S. and the United Kingdom, twin brothers Andris and Marton Szep took specific interest in the UA, partially because of its highly ranked Eller College of Management.

Also, their parents previously worked in Tucson and hold fond memories of the city and the UA, Andris said.

Now, both are UA Honors College freshmen pursuing studies in Eller with a second major in physics.

Since Andris began developing mobile apps for personal and business use in 2011, selling them through the App Store, he has been keen on continuing that work in the global marketplace.

"When creating an iPhone app, I do all of the designing, programing, publishing, managing and marketing," he said. "For me, this was the first time I got deeply involved in marketing, management and in business, and since this area interested me especially, I decided to pursue it further."

Andris said the UA is the ideal institution to help expand his expertise in application development and business management. He already is impressed with the school, crediting UA recruitment and outreach counselor Jenni Keatseangsilp and his pre-business honors adviser, Elise Romero, for their support with his transition.

Marton's interests are in business management, and he intends to pursue a degree in management information systems with his studies in physics.

"Physics is a great way to exercise the brain — in my opinion, it needs math skills, knowledge, creativity and lots of logic," Marton said.

"It will also be great to spice up the business-oriented environment with something pretty different," he said. "I have had glimpses into the world of business, but so far I have never actually been part of that world. Now I will finally be able to be part of it."