Atifa Rawan launched the UA into a project to help rebuild academic libraries in Afghanistan in 2002 and hasn't stopped working since.
La Monica Everett-Haynes
,
University Communications
May 21, 2008
Resources for the Media
Extra Info: 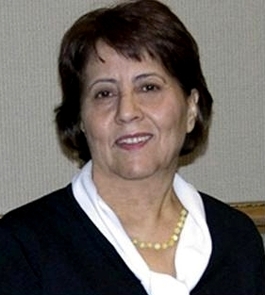 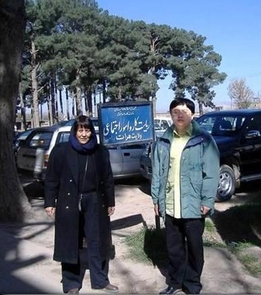 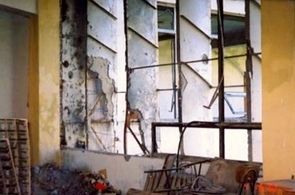 The Polytechnical University of Kabul's library was the target of several attacks, as shown in this 2002 image. (Photo courtesy of Atifa Rawan)

Atifa R. Rawan was well aware that Afghanistan’s academic libraries and the many rare documents and books they contained had to be preserved – and quickly.

Numerous libraries had been shut down, ruined or destroyed in the years since 1979 because of war, political and social instability and a turbulent economy. Matters were worsened with the inhibitive measures – such as restricting education, particularly for women – imposed by the Taliban, a nationalist group that held power in the country from 1996 to 2001.

Rawan, a University of Arizona librarian who was born and raised in Afghanistan, was determined to help protect the libraries and in 2002 urged the UA to aid in rebuilding and restoring the country’s academic libraries.

“If something happens to the physical documents, we want to have them,” Rawan said. The most recent endeavor involves a partnership with Nancy Hatch Dupree, an internationally known historian, and the Afghanistan Centre at Kabul University to preserve material from 1989 to 2006.

The project is funded by a National Endowment for the Humanities grant totaling nearly $300,000, which has covered the purchase of equipment, staff salaries, travel and other expenses.

“We moved to get the grant in order to open up that material,” Rawan said. “Until now, it’s all been in boxes, and we felt there had to be a way to get the material out of those hidden areas.”

The center holds claim to more than 13,000 titles that represent about 36,000 bodies of work – newspapers, monographs, almanacs, yearbooks, serial publications, books and other materials in the Dari, English and Pashto languages. It’s the largest consolidation of materials on Afghanistan’s recent history.

“You are not going to find this information anywhere in Afghanistan – not even in the libraries, because many of them were destroyed,” she said.

Rawan and a colleague, UA associate librarian Yan Han, are helping to catalog and digitize the center's collection while also building an infrastructure that the 19 universities in Afghanistan can eventually use to access the digital information.

The project has 15 staff members in Afghanistan helping the UA duo, who are also teaching Afghanis much-needed technical skills. They are also teaching them how to maintain the system, which is built with open source software.

“We could have done the whole project here, by ourselves,” Rawan said. “But, this way, they are able to take ownership and pride. The main thing is to set up the infrastructure so that the project can be self-sustaining.”

Han, whose main tasks have been to build an integrated library system and a digitization infrastructure, is traveling to Afghanistan next month to determine when the UA can turn the project over to the trainees.

“Like Atifa, I’m probably a risk taker,” said Han, who works with a UA software programmer and several students at the University to check and improve the quality of scanned images and save them electronically. Thus far, the group has received about 120,000 pages, he said.

“When she asked me if I was willing to participate, I thought that risks sometimes mean an opportunity,” he added. “I thought it was a great project. Education changed my life and I believe it is the right thing that we are helping to deliver education to the people there.”

The Power of Information

It’s important that the people of Afghanistan – as well as students, scholars and policymakers around the world – have free and easy access to the country’s cultural and political records, Rawan said.

In fact, the project is opening access to certain documents and literature to individuals outside of the region where the only chance to read them before would have been to visit the Middle East. Now, anyone around the world with Internet access can view the documents being digitized.

“This was a fairly clear opportunity where we had the means to offer assistance,” said Robert Mitchell, interim associate dean of the UA Libraries.

“We thought it was our civic duty to step up and work with Atifa and the government of Afghanistan. It was a more complicated process than it sounds, but there wasn’t anybody else who could do this,” he said.

Since then, the UA has worked with, diplomats, non-governmental organizations, the government in Afghanistan, students and translators, and others to transfer rare and precious information and data from their fragile paper form to a digital platform.

“The library is the public wheel and has traditionally been – at least in open societies – the place where information is collected and disseminated,” Mitchell said. “That’s why it’s been particularly important to try and reconstruct libraries in Afghanistan in some way.”

Libraries are among some of the most critically important institutions for countries that are trying to rebuild, and the Internet becomes a hugely necessary catalyst in that process.

“The great thing about the World Wide Web is that it is as close to being all inclusive as we’ve seen on this planet,” Mitchell said.

Despite the urgency to save the libraries and their collections, Rawan and Han had to be especially careful in their work and had to navigate challenges related to politics, funding, relationships, language and technology, among other issues, said Bess de Farber, the grants and revenue manager for the UA Libraries and the Center for Creative Photography.

“They are working to solve these problems,” de Farber said. “They are inventing the wheel that others can follow.”

To speak with the Afghanis on a regular basis, Rawan and Han use Skype, a Web-based software program that allows users to make for telephone calls over the Internet. At times, the UA librarians have been unable to travel abroad and, at other times, relied on colleagues to get necessary collections out of Afghanistan and to the UA staff here working to digitize the documents and books.

Without Rawan and her connections “it’s unlikely that we would have had any real points of contact with what was then the new government in Afghanistan,” said Mitchell, who added that Rawan has numerous contacts with government officials in her home country.

The path that has led to the project with the Afghanistan center had an interesting beginning. Rawan knew she wanted to focus on the period that began in 1989, when the Soviet Union pulled out of Afghanistan, launching a major civil war, to 2006, which was marked by an international effort to improve the social, economic and political situation in the country.

But Rawan would need a grant and a contact – namely a historian who understood the history of Afghanistan and the importance, especially now, of preserving material in the country that has only been documented in a printed form.

In a conversation with UA colleague Bess de Farber some time in 2006, Nancy Hatch Dupree came to mind.

Since her childhood, Rawan was quite familiar with the work of Dupree and her late husband, Louis Dupree, two of the foremost historians and anthropologists to document the history of Afghanistan.

Today, Nancy Hatch Dupree remains a top, internationally known expert on Afghan art, archeology and the history of the country, having founded the Afghanistan Centre at Kabul University, where she remains its director. The organization is known to hold the most complete assembly of works relevant to the country’s history in the region surrounding Afghanistan. Rawan began scanning her mental Rolodex for the names of the people she knew who might have a direct link to Dupree – professors, scholars, government and agency employees. In 2006, she and de Farber contacted the National Endowment for the Humanities, which has offered some funding specifically for projects that aimed to preserve Afghanistan’s culture and history.

As chance would have it, Dupree, a retired Duke University professor who splits her time between Afghanistan and Peshawar, Pakistan, had also contacted the agency. The NEH grant was eventually awarded to the UA, which continues to work with Dupree's organization under a project known as “Preserving and Creating Access to Afghanistan Literature from the Jihad Period.”

The grant proposal read: “For many of the youth of Afghanistan who grew up in camps outside of Afghanistan, the collection offers a glimpse into their country’s past and helps them develop greater understanding of their culture.”

Dupree serves as the historian on the NEH-funded project, and checks both the value and validity of materials before they are brought to the UA to be digitized. Faculty and staff from the UA and Afghanistan Centre at Kabul University are digitizing about 300,000 pages that will be archived electronically on the Internet.

“It’s a primary source of research. This is just marvelous,” Rawan said.

A 30-Year Commitment to Librarianship

All told, Rawan has been involved in librarianship for more than 30 years, becoming an expert in the areas of government documents, political science, maps and cataloging. among others.

In 2005, she received the American Library Association's Elizabeth Futas Catalyst for Change Award, which recognizes the work of librarians who make positive changes in the profession.

She came to the UA in 1985 as an associate librarian in the catalog department, where she supervised material relevant to the Middle East and South Asia.

In 2002, she served as a consultant for the Asia Foundation, which hired her to assess the condition of several libraries and collections in Kabul, the capital of Afghanistan.

That following year, Rawan spent part of her sabbatical in Afghanistan, where she served as a consultant to the Kabul University’s library staff. She also supported the Kabul Institute of Medicine and the University of Education libraries, providing library training to their staff members.

In 2004, Rawan received a grant from the International Arid Lands Consortium and United States Agency for International Development, or USAID, to rebuild the “information infrastructure” in the country. She also spent time in Afghanistan in 2005 training faculty, staff and students in Kabul on the system.

She also was involved in the Afghanistan digital libraries project, which was funded by Washington State University and USAID and established an integrated library system built with open source software. Rawan and Han have worked on the project since 2005.

“There is a lack of trained professionals in Afghanistan,” Rawan's colleague, de Farber, said, noting that librarianship has deteriorated in the country in recent decades.

“But Rawan has leveraged her relationships here and there,” de Farber added, “and, in a unique ways, she has come up with solutions to problems in Afghanistan.”