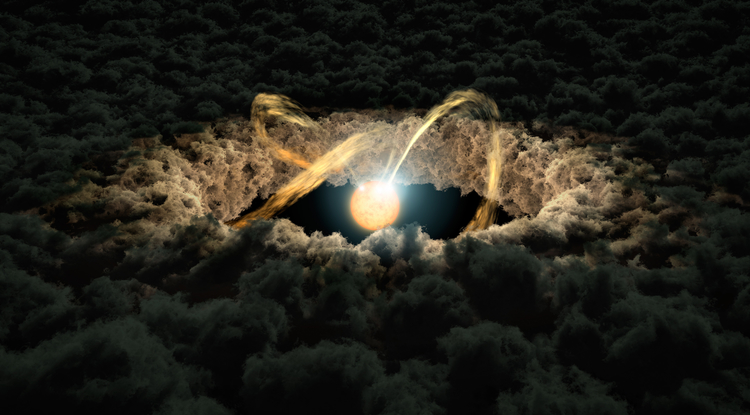 This illustration shows a star surrounded by a protoplanetary disk. The star's irregular illumination allows astronomers to measure the gap between the disk and the star by using a technique called "photo-reverberation" or "light echoes." (Illustration: NASA/JPL-Caltech)

Light Echoes Give Clues to Planet Nursery Around Star

For the first time, UA astronomers used echoes of light to determine the distance from a star to the inner wall of its surrounding planet-forming disk of dust and gas.
University Relations - Communications
April 28, 2016
Resources for the Media 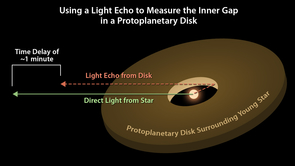 Astronomers can use light echoes to measure the distance from a star to its surrounding protoplanetary disk. This diagram illustrates how the time delay of the light echo is proportional to the distance between the star and the inner edge of the disk. (Illustration: NASA/JPL-Caltech)

Imagine you want to measure the size of a room, but it's completely dark. If you shout, you can tell if the space is relatively big or small, depending on how long it takes to hear the echo after it bounces off the wall.

Astronomers use this principle to study objects so distant that they can't be seen as more than points. In particular, researchers are interested in calculating how far young stars are from the inner edge of their surrounding protoplanetary disks. These disks of gas and dust are sites where planets form over the course of millions of years.

"Understanding protoplanetary disks can help us understand some of the mysteries about exoplanets, the planets in solar systems outside our own," said Huan Meng, postdoctoral research associate at the University of Arizona's Department of Astronomy and Steward Observatory. "We want to know how planets form and why we find large planets called 'hot Jupiters' close to their stars."

Meng is the first author on a new study published in the Astrophysical Journal using data from NASA's Spitzer Space Telescope and four ground-based telescopes to determine the distance from a star to the inner rim of its surrounding protoplanetary disk.

Making the measurement wasn't as simple as laying a ruler on top of a photograph. Doing so would be as impossible as using a satellite photo of your computer screen to measure the width of the period at the end of this sentence.

Instead, researchers used a method called "photo-reverberation," also known as "light echoes." When the central star brightens, some of the light hits the surrounding disk, causing a delayed "echo." Scientists measured the time it took for light coming directly from the star to reach Earth, then waited for its echo to arrive.

Thanks to Albert Einstein's theory of special relativity, we know that light travels at a constant speed. To determine a given distance, astronomers can multiply the speed of light by the time light takes to get from one point to another.

To take advantage of this formula, scientists needed to find a star with variable emission — that is, a star that emits radiation in an unpredictable, uneven manner. Our own sun has a fairly stable emission, but a variable star would have unique, detectable changes in radiation that could be used for picking up corresponding light echoes. Young stars, which have variable emission, are the best candidates.

The star used in this study is called YLW 16B, which lies about 400 light-years from Earth. YLW 16B has about the same mass as our sun, but at 1 million years old, it's just a baby compared to our 4.6-billion-year-old home star.

Astronomers combined Spitzer data with observations from ground-based telescopes: the Mayall telescope at Kitt Peak National Observatory in Arizona, the SOAR and SMARTS telescopes in Chile, and the Harold L. Johnson telescope in Mexico. During two nights of observation, researchers saw consistent time lags between the stellar emissions and their echoes in the surrounding disk. The ground-based observatories detected the shorter-wavelength infrared light emitted directly from the star, and Spitzer observed the longer-wavelength infrared light from the disk's echo. Because of thick interstellar clouds that block the view from Earth, astronomers could not use visible light to monitor the star.

Researchers then calculated how far this light must have traveled during that time lag: about 0.08 astronomical units, which is approximately 8 percent of the distance between Earth and its sun, or one-quarter the diameter of Mercury's orbit. This was slightly smaller than previous estimates with indirect techniques, but consistent with theoretical expectations.

Although this method did not directly measure the height of the disk, researchers were able to determine that the inner edge is relatively thick.

While light echoes from supermassive black holes represent delays of days to weeks, scientists measured the light echo from the protoplanetary disk in this study to be a mere 74 seconds.

The Spitzer study marks the first time the light echo method was used in the context of protoplanetary disks. The approach can be applied to other systems of stars with planet-forming disks around them, the scientists pointed out.

"Knowing the exact position of the inner boundary of a protoplanetary disk is important to anyone who wants to understand planet evolution," Meng says.

Most stars are born with a protoplanetary disk around them, and astronomers have known for a long time that there is a gap between the star and its disk because of two competing processes: Close to the star, its strong radiation ionizes gas particles in the disk, diverting them along the star's magnetic field lines above and below the plane of the disk. The other mechanism that prevents the disk from reaching all the way to the star's surface is heat. Once a dust particle gets too close to the star, it simply vaporizes and either falls onto the star or gets blown out of the system.

"The predominant one of those two mechanisms plays an important role in the evolution of the disk, and right now, we don't know which it is," Meng says.

Until now, astronomers used a technique called interferometry to determine the position of the inner edge of protoplanetary disks, but that method requires assumptions about the shape of the disk, resulting in controversial findings.

"Our method provides a completely independent measurement of which mechanism plays the predominant role now and in the future," Meng says.

NASA's Jet Propulsion Laboratory in Pasadena, California, manages the Spitzer Space Telescope mission for NASA's Science Mission Directorate in Washington. Science operations are conducted at the Spitzer Science Center at the California Institute of Technology in Pasadena. Meng was a visiting researcher at Caltech during this research. Spacecraft operations are based at Lockheed Martin Space Systems in Littleton, Colorado. Data are archived at the Infrared Science Archive housed at the Infrared Processing and Analysis Center at Caltech. Caltech manages JPL for NASA.

The Jet Propulsion Laboratory at the California Institute of Technology contributed to this story.