Inhibiting a molecular process cells use to direct proteins to their proper destinations causes more than 90 percent of affected mosquitoes to die within 48 hours of blood feeding, a UA team of biochemists found.
Daniel Stolte
,
University Communications
July 15, 2011
Resources for the Media
Extra Info:

Weston Stover, a UA undergraduate researcher in the lab, was so struck by the effects of blood feeding on these mosquitoes that he made a time-lapse video for his biochemistry senior thesis and posted it on YouTube. 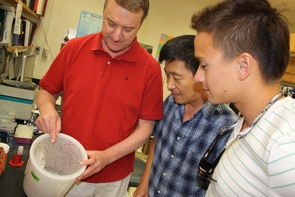 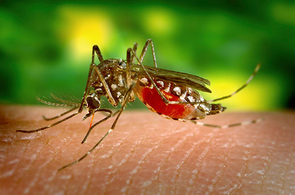 Recognized by white markings on the legs, a mosquito of the species Aedes aegypti feeds on human blood. (Photo credit: CDC/James Gathany) 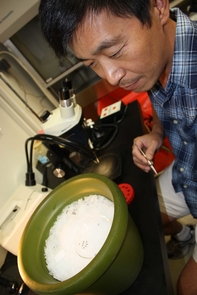 Jun Isoe anesthetizes mosquitoes by placing them on ice before he prepares them for an experiment. For this study, Isoe has injected RNAi into about 5,000 mosquitoes. "I can process about 1,000 in an 8-hour day," he said. (Photo credit: Daniel Stolte/UANews)

Mosquitoes die soon after a blood meal if certain protein components are experimentally disrupted, a team of biochemists at the University of Arizona has discovered.

The approach could be used as an additional strategy in the worldwide effort to curb mosquito-borne diseases like dengue fever, yellow fever and malaria.

When the researchers blocked a cellular process known as vesicle transport, on which the mosquitoes rely to release digestive enzymes into the gut among other functions, it caused the affected animals to die within two days of blood feeding.

"The idea behind our research is this: If we can kill the mosquito after she bites the first person, she won't be able to bite and infect a second," said Roger Miesfeld, a professor in the UA's department of chemistry and biochemistry, who led the research project.

"We do this by blocking the mosquito's ability to digest its blood meal," said Miesfeld, also a member of the UA's BIO5 Institute.

"During a blood meal, a mosquito ingests its body weight in blood. It's the equivalent of a 125-pound human consuming a 12-gallon smoothie made from 25 pounds of hamburger meat plus a half pound of butter and two tablespoons of sugar," Miesfeld said.

Miesfeld and the research team had previously shown that the blood feeding process poses a huge metabolic challenge to the female mosquito.

"By disrupting any number of biochemical processes needed to fully utilize the blood meal, the mosquito has a very difficult time completing the egg production cycle," he added.

To maintain their bodily needs, the insects rely on sugary nectar from flowers, but when the time to make eggs comes, they need large amounts of protein. Only female mosquitoes bite and feed on the blood of humans or warm-blooded animals.

If a mosquito finds enough victims to bite and avoids being squashed, it can live as long as three weeks. During that time, it may lay up to five clutches of more than 100 eggs each.

For their studies, the team used mosquitoes of the species Aedes aegypti, which originally hails from the sub-tropical and tropical regions of Africa. These mosquitoes are now found in many parts of the world and are particularly abundant in towns and cities where the climate is warm and water is plentiful. A. aegypti mosquitoes buzz about at dawn and dusk in search of their next blood meal, preferably from people's ankles.

A. aegypti mosquitoes are the main vector for dengue fever, now the most common viral disease transmitted by mosquitoes. Dengue fever has made a comeback especially in subtropical and tropical regions due to the geographical spread of the mosquitoes and the virus. Four strains, or serotypes, of disease-causing dengue viruses are known.

When infected for the first time, most people suffer through a bout of high and painful fever, but usually the illness is not life threatening and renders them immune to that particular strain of dengue virus. However, a subsequent infection with any of the other dengue virus strains often triggers an all-out immune response that leads to a much more severe form, called dengue hemorrhagic fever, which can be fatal.

Miesfeld said most mosquito-borne pathogens are not passed down from the female mosquito to her offspring, but instead picked up by the mosquitoes when they bite an infected human.

In the case of A. aegypti mosquitoes, the pathogen is often dengue or yellow fever viruses, whereas the Anopheles gambiae mosquito, which is found in many parts of Africa, transmits the more deadly malaria parasite. Miesfeld further explained that malaria and dengue pathogens take about 10 to 12 days to complete their life cycle within the mosquito before they can be transmitted to humans through blood feeding.

"The most dangerous mosquitoes are the older ones," Miesfeld said.

His team used a technique called RNAi to specifically target genes that are required for the digestion process. The researchers homed in on a protein complex called COPI, which stands for coatomer protein 1.

COPI consists of several subunits that together make up the envelope of the vesicles on which the cell relies for internal transport and for secretion of enzymes into the gut.

When a female mosquito takes a blood meal, the cells lining its gut secrete enzymes to break down the blood proteins. The secretion process involves packaging the enzymes in small droplets called vesicles that the cells then release into the gut.

"We thought, 'Why don't we knock out the whole process that allows the proteases to be secreted?' That's where we got this amazing result," Miesfeld said. "Not only did we eliminate her ability to secrete anything, we were surprised to find that about 90 percent of those mosquitoes died within two days after feeding on blood."

The COPI RNAi does not have an adverse effect on the female mosquitoes for 10 days – unless they decide to take a blood meal.

"When she does, all hell starts breaking loose, biochemically and anatomically speaking," Miesfeld said.

"What we think is happening is that if there is protein in her gut, it induces the secretory machinery. It initiates this huge secretion process but it's defective and causes cells to disintegrate," he added. "The whole lining of the gut starts to fall apart, allowing the blood to seep into her body."

In looking at the potential causes, Miesfeld said his team found that removing any one of the COPI subunits causes the whole complex to fall apart.

"Based on what we know about the COPI system, it shouldn't have that strong of an effect," he said.

"As scientists have been knocking out COPI to learn more about its function over the past couple of years, they have achieved some interesting results," Miesfeld added. "Together with our findings they suggest that COPI does a lot more than what people thought."

Miesfeld envisions that the ultimate goal of this research is to develop a small molecule that works in place of injected RNAi and acts as a specific inhibitor of the secretion process.

For this to be an effective mosquito-selective insecticide, it must not have any effect on humans.

The simplest use would be to soak it into mosquito nets like currently available insecticides that target the mosquito's nervous system. A slightly more complex strategy would be to include it in a pill that humans take, so the mosquitoes pick up the inhibitor drug when they bite. As part of this strategy, the researchers are looking for genes that are unique to the mosquito and could serve as targets without affecting human health.

To explain, Miesfeld said to imagine a village in the tropics during a rainy season.

"As the mosquitoes hatch in large numbers, the whole population of villagers is ready," he explained. "As soon as the insects start biting, they take up the inhibitor and before they can bite again, they die in large numbers. Over a few seasons, that can make a difference."

Miesfeld added it is unlikely there would ever be a silver bullet eliminating mosquito-transmitted diseases like malaria and dengue fever altogether.

"One potential issue with our strategy is genetic changes rendering the mosquitoes immune over time," Miesfeld said. "Many approaches from different angles will be necessary, and ours could be another tool in the toolbox."