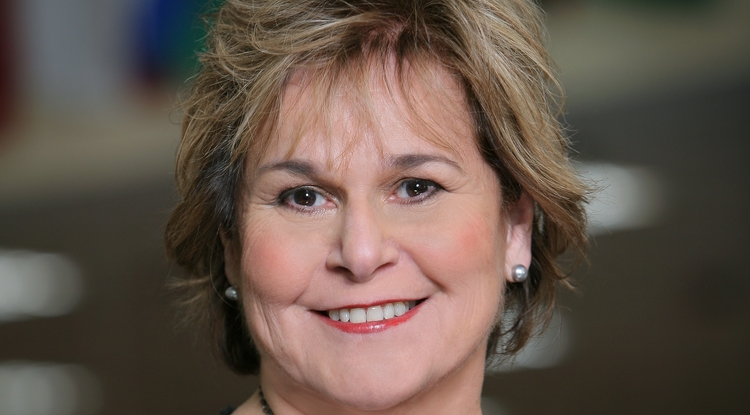 Read what UA students, employees and alumni have to say in honor of Velez on the UA blog: https://uanews.arizona.edu/blog/giving-thanks-mtv-pillar-support

The UA Graduate College has created the Dr. Maria Teresa Velez Diversity Leadership Scholarship in honor of Velez. To be given annually to students in master's or doctoral programs (new or continuing students), the scholarship will honor those with a demonstrated commitment to advancing diversity in K-12 education, higher education and the greater community. The award will consist of a cash stipend of $25,000 and a Graduate College Tuition Scholarship to cover full base tuition for one year. Information is available online: https://grad.arizona.edu/funding/opportunities.

Maria Teresa Velez had a focused, dedicated mission to open up historically inaccessible spaces for underrepresented students, particularly at the graduate-level.

As associate dean of the University of Arizona's Graduate College, Velez envisioned that, with graduate degrees in hand, such students would be best equipped to positively impact communities — whether they be social, economic or scientific — throughout Arizona and across the nation.

To that end, Velez is credited with ushering in a revolutionary phase at the UA, resulting in some of the institution’s most significant improvements in graduate student diversity. She remained committed to this work up until her death on April 13.

"Dr. Velez had a remarkable impact at the University of Arizona and in the lives of many graduate students who have gone on to accomplish amazing things because of her guidance and mentorship," said UA President Ann Weaver Hart. "She will be deeply missed and remembered very fondly at the UA. Our thoughts are with her family and friends as they grieve her loss."

The Graduate College and Velez's family will host a memorial service in her honor on April 22 from 5-7 p.m. in the Grand Ballroom of the Student Union Memorial Center. A program will begin at 5:30, with remarks from members of Velez's family and the campus community. Music will be provided by the UA Fred Fox School of Music.

Andrew Carnie, dean of the Graduate College, said Velez was an "irreplaceable fixture” at the college, and announced the establishment of the Dr. Maria Teresa Velez Diversity Leadership Scholarship. The award, funded by the Graduate College, comes with a stipend of $25,000 and will be given annually to a graduate student who exemplifies the work of Velez.

After completing a postdoctoral fellowship in psychology from the UA in 1984, Velez was hired as a psychologist for the UA's Counseling and Psychological Services division.

In 1996, she transitioned fully to the academic side, serving as associate dean for the Graduate College, with affiliated faculty appointments in the Center for Latin American Studies and the Departments of Mexican Studies and Gender and Women's Studies. She also served as a research scientist in the Norton School of Family and Consumer Sciences.

Velez became part of some of the earliest efforts to improve diversity among the graduate student body, training campus employees on how to offer personalized support to students, while helping to develop academic and professional programs for undergraduate and graduate students.

"I have collaborated with Maria Teresa Velez many times over the past few years. I have been so impressed with her commitment to minority issues, especially with regards to graduate recruitment," said Elliott Cheu, associate dean in the College of Science.

"She was always pressing us in the College of Science to step up our game with regards to minorities, and through her efforts the UA has made its mark on graduating an ever-increasingly diverse population," Cheu said. "When she first announced her retirement, I emailed her to let her know how much I would miss working with her. Her reply, in typical MTV fashion, read: 'Ha! I plan to stick around for three years so I will have this time to continue to torment Science.' The UA has lost a truly exceptional soul."

Although she began her three-year phased retirement in 2013, which was set for June 2016, Velez continued her work helping to increase student diversity and develop international graduate programs, having established memorandum of agreement partnerships with governments in Brazil, Chile and Mexico to sponsor students for training at the UA.

"I frequently asked her to meet with international scholars, academics and university officials visiting the University of Arizona. She did so with a grace and eloquence that forever enhanced the image of the University in their minds," said Todd Fletcher, an associate professor in the Department of Disability and Psychoeducational Studies.

"In my mind I will always remember the qualities of compassion, commitment, perseverance, excellence and advocacy reflected in her relentless pursuit of creating and facilitating educational opportunities for students," Fletcher said. "She will forever be remembered as a students' dean and the ultimate ambassador of the University of Arizona."

Carnie said: "She transformed the graduate enterprise both in terms of promoting student diversity and inclusion and pushing for the highest levels of excellence."

Unique Champion Within the Academy

Over the last 15 years, Velez has served as principal investigator on several federal and foundation grants that promote graduate diversity, including the Sloan Indigenous Graduate Partnership, Graduate Access Fellowships, Minority Access to Research Careers and the Undergraduate Research Opportunities Consortium.

"She spent her entire career supporting others in their quest for academic excellence," Marcela Vásquez-León, director of the UA Center for Latin American Studies, noted in a message after Velez's passing. "She was a role model for many women in academia, and she was a dear friend to many of us. She was truly 'una mujer de armas tomar.'"

Velez, attuned to the financial challenges associated with pursuing an advanced degree, regularly identified emergency funds to help retain students who were struggling to remain in their programs at the end of contracts and fellowships, or when other forms of personal hardship hit.

Over the course of her UA tenure, she attracted about $40 million in external funding for the purpose of recruiting, retaining and graduating underrepresented graduate student populations, Carnie said.

The work of Velez, her teams and their collaborators helped contribute to the UA topping its Association of American University peers for having the highest percentage (nearly 20 percent) of African-American, American Indian and Hispanic students in graduate-level programs. During the fall semester, nearly 1,500 such graduate students were enrolled at the UA, representing a nearly 65 percent increase over a 10-year period.

"Dr. Velez and I worked very closely together while I served as the Graduate College dean, which was only a portion of the time that she worked tirelessly to make a difference in the lives of our graduate students," said UA Provost Andrew Comrie.

Today, the UA is also the nation's top producer of American Indian doctoral graduates and a top-10 producer of Hispanic students with doctoral degrees. The collaborative work of Velez contributed significantly to those accomplishments.

Comrie, who worked directly with Velez on such initiatives during his tenure as Graduate College dean, said Velez was a visionary.

"She helped me see the world through diverse eyes, and what was needed to make it better,” he said. “Not only did she oversee all graduate admissions for many years, but she led a full range of graduate diversity initiatives that changed many lives."

Given such work, and her decades of service, Velez directly impacted the lives of "thousands of students,” Comrie said.

UA alumna Deyanira Nevarez Martinez is among them.

Martinez and Velez met through her younger sister, who was a scholar in what was once the UA’s McNair Achievement Program, which Velez oversaw at the time. It had been years since Martinez had graduated — she received UA degrees in political science and Latin American studies in 2008 — to which Velez asked: “How did I miss you the first time around?”

Martinez was interested in graduate work but intimidated by it. She said Velez made it possible by connecting her with professors and providing the moral and financial support needed. In 2014, she earned her master’s degree in planning, having been named two years earlier as a "40 Under 40" honoree by the Tucson Hispanic Chamber of Commerce.

In 2013, Martinez was among a group of the members of Las Adelitas Arizona to establish the donor-supported Dr. Maria Teresa Velez Scholarship, adopting her legacy of helping to financially support underrepresented students pursuing degrees.

"All of the women on the board of Las Adelitas Arizona had been heavily influenced in one way or another by Dr. Velez, and it made sense that we would honor her legacy," said Martinez, who is now completing her first year as a doctoral student at the University of California, Irvine, in planning, policy and design.

Since graduating from the UA, Martinez has been looking for someone — a colleague, collaborator or mentor — akin to Velez.

"When I got to UCI, I came in thinking that I needed to find the 'MTV of UCI,'" she said. "But on this campus, like many campuses across the country, that person doesn't exist."

However, Martinez affirms that new generations of scholars are now devoted to carrying forward the work Velez started. "The academy doesn't even know what's coming," she said.

She Lifted as She Climbed

The awards Velez has received are many, including:

Such awards are a credit not only to her work at the UA, but also to her advocacy and other efforts nationally to improve graduate student diversity.

Disconcerting to Velez were the persistently lower enrollments of women and also African-American, American Indian and Hispanic students nationwide in certain programs within the high-demand science, technology, engineering and mathematics fields.

The fact that certain students were adversely impacted when they chose to prioritize their familial and community obligations was not seen by Velez as mere happenstance or the product of a student’s limitations. For Velez, this was a deeply troubling incongruence within higher education, whose public institutions maintain a mission to serve the urgent and emergent needs of the general population. This drove her efforts.

As with Deyanira Nevarez Martinez, evidence of Velez's contributions is imprinted in the lives and work of people who are now administrators, tenure track faculty, scientific researchers and activists, working with higher-education institutions, tribal nations, U.S. government agencies and others.

"What amazed me about Dr. Velez is that it always seemed as though she knew you better than you knew yourself. She knew your strengths, she related to your experiences, and she created opportunities that you never knew you wanted or needed," said UA alumna Rebecca Covarrubias, an assistant professor of psychology at the University of California, Santa Cruz.

"This was true when I first met her as a low-income, first-generation college Latina student interviewing for the McNair Achievement Program at the University of Arizona," Covarrubias said. "Not only did Dr. Velez expose me to a new way of answering questions about my community through social psychological research, but she also welcomed me into a family that stayed with you wherever you went, as families often do."

Aja Y. Martinez, who began her career in higher education as a McNair scholar, said Velez is the reason Martinez decided to pursue graduate studies — but it was a challenge.

For a single mother with a small child, the climate was not always welcoming, Martinez said. But Velez "saw something in me" and told Martinez she could not walk away with an undergraduate degree only.

Ultimately, Martinez earned three UA degrees — a bachelor’s in anthropology, a master’s in English, and a doctorate in rhetoric, composition and the teaching of English.

Directing her words to Velez, Martinez said: "'Te amo, que en paz descanse,' and I'll see you on the other side."