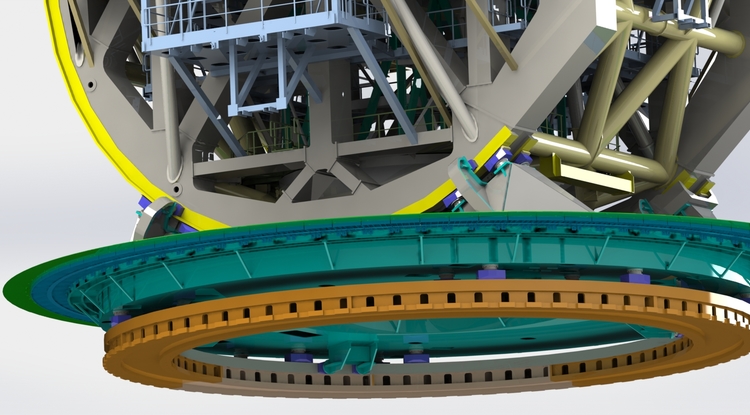 A Massive Mount for Giant Mirrors

The signing of the contract for producing the massive support structure that will hold the seven mirrors manufactured at the University of Arizona marks a major step toward completion of the Giant Magellan Telescope, or GMT, a next-generation telescope that promises to revolutionize our understanding and view of the universe.
University Communications
Oct. 29, 2019
Resources for the Media
Extra Info:

About the Giant Magellan Telescope

The Giant Magellan Telescope is a next-generation ground-based telescope that promises to revolutionize our understanding and view of the universe. The GMT is poised to enable breakthrough discoveries in cosmology, the study of black holes, dark matter, dark energy, and the search for life beyond our solar system. The telescope’s primary mirror combines seven 8.4-meter (27 feet) diameter circular segments to form an effective aperture 24.5 meters in diameter. The GMT will be located at Las Campanas Observatory in Chile’s Atacama Desert and the project is the work of a distinguished international consortium of leading universities and science institutions. Funding for the project comes from the partner institutions, governments and private donors.

The latest design of the enclosure, telescope and site at Las Campanas Observatory in Chile. (Image: M3 Engineering) 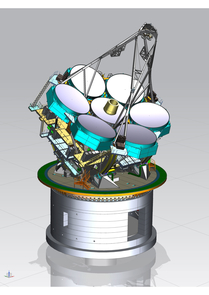 GMTO Corporation, the organization managing the development of the Giant Magellan Telescope on behalf of its U.S. and international founders, has signed a contract with MT Mechatronics and Ingersoll Machine Tools to design, build and install the telescope’s precision steel structure.

The Giant Magellan Telescope, or GMT, is an 80-foot (24.5-meter) diameter next-generation giant optical infrared observatory that will explore the frontiers of astronomy, including seeking to answer one of humanity’s most pressing questions: “Are we alone?” The GMT will study the atmospheres of planets orbiting stars far from our solar system to search for signs of biochemistry.

MT Mechatronics of Mainz, Germany, and Rockford, Illinois-based Ingersoll Machine Tools, part of the Italian Camozzi Group, will design and manufacture the 1,800-ton precision mechanism, known as the “telescope structure,” that will hold the GMT’s optics and smoothly track celestial targets as they move across the sky. The telescope structure will be designed by MT Mechatronics and manufactured, assembled and tested by Ingersoll before being shipped to, and installed at, the GMT observatory site high in the remote Chilean Andes.

The telescope structure will hold the GMT’s seven giant mirrors in place as they bring light from distant stars and galaxies to a focus so it can be analyzed by scientific instruments mounted deep inside the telescope. The mirrors, the largest in the world, are made at the University of Arizona’s Richard F. Caris Mirror Lab.

When in operation, the telescope structure, complete with mirrors and instruments, will weigh 2,100 tons but will float on a film of oil just 50 microns (2 one-thousandths of an inch) thick, allowing it to move essentially without friction as it compensates for Earth’s rotation, tracking celestial bodies in their arc across the sky. With its unique design, the GMT will produce images that are 10 times sharper than those from the Hubble Space Telescope in the infrared region of the spectrum.

The mount contract completes another significant milestone for GMTO in 2019. In March, the excavations for the foundations of the telescope’s pier and enclosure were finished, and in July the second of the GMT’s seven primary mirror segments was completed and shipped to temporary storage. Casting of the sixth primary mirror segment at the University of Arizona is expected to begin in mid 2020.

Dennis Zaritsky, deputy director of Steward Observatory, said the University of Arizona is a key partner involved in the GMT, and he is excited to see the project reach this stage.

"It is incredible that we are now actually building the structure for one of mankind's signature scientific endeavors," he said. "I can't wait to see what we discover with this amazing machine."

The contract between GMTO, MT Mechatronics and Ingersoll Machine Tools will involve nine years of work and 1,300 tons of structural steel. The structure is expected to be delivered to Chile at the end of 2025 and be ready to accept mirrors in 2028.

While the primary mirror segments for the GMT are being manufactured at the UArizona, Tucson's astronomy hub plays another major role in the project: The enclosure that will house the entire telescope's enclosure is being designed by Tucson-based architecture, engineering and construction management company M3. In addition to several other observatories, M3 also designed the enclosure for the Large Binocular Telescope, or LBT, which is managed and headquartered at the UArizona.

"Manufacturing the telescope structure is one of the biggest steps we will take on our journey to building the Giant Magellan Telescope," Shelton said.

According to Fanson, MT Mechatronics and Ingersoll Machine Tools were selected for their commitment to quality, extensive experience with astronomical telescopes and abilities to manufacture complex precision structures, following a two-year global competition. MT Mechatronics has more than 50 years of experience with telescopes, beginning with the Parkes Radio Telescope in Australia. It was part of a European consortium constructing the European Atacama Large Millimeter/submillimeter Array telescope antennas and was the mount designer for the Daniel K. Inouye Solar Telescope in Hawaii.

Since its inception in 1891, Ingersoll Machine Tools Inc. made an iconic name in the milling machines sector, successfully serving the defense sector and then the newborn aeronautics and aerospace industry. The company has many decades of experience with manufacturing precision steel structures, including recently partnering with MT Mechatronics on the construction of the Daniel K. Inouye Solar Telescope telescope mount.