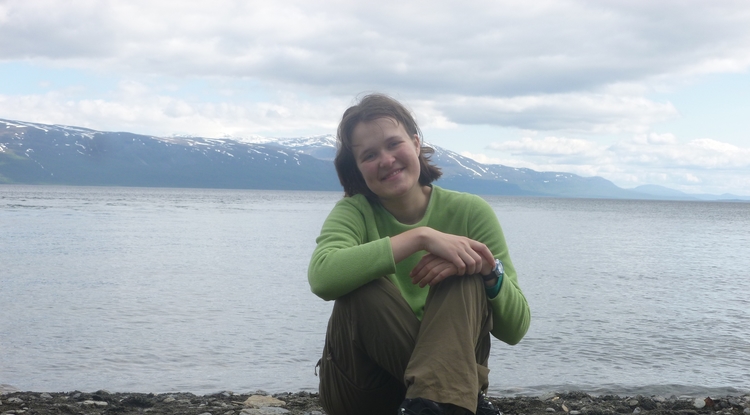 Is the permafrost ecosystem about to experience a complete collapse in the next 100 years? A UA team of researchers is trying to find out.
Rose Vining
,
UA Undergraduate Biology Research Program
Oct. 10, 2016
Resources for the Media
Extra Info:

This research was funded by the U.S. Department of Energy Office of Biological and Environmental Research under the Genomic Science program (awards DE-SC0004632 and DE-SC0010580), to UA researchers Scott Saleska and Virginia Rich. BRAVO! support to Rose Vining was made possible by the Howard Hughes Medical Institute under grant No. 52006942. The Department of Energy-funded collaboration includes Ohio State University, Florida State University, the University of New Hampshire, Umeå University in Sweden and the University of Queensland in Australia. 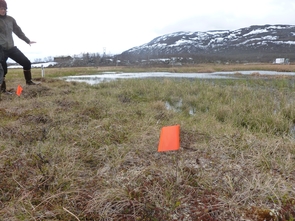 Flags are placed to designate sampling locations at the field site in Sweden. Rose Vining is working with Moira Hough (pictured here) as part of a research team investigating permafrost, which is thawing under the effect of a changing climate. (Photo courtesy of Rose Vining) 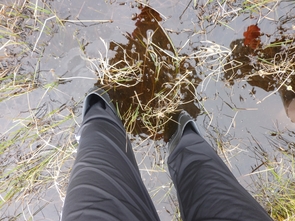 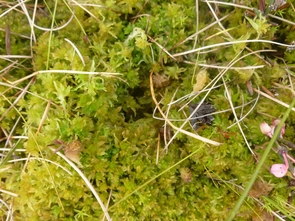 The UA research team has observed that a type of moss, called Sphagnum, has been decreasing over the growing season. (Photo courtesy of Rose Vining)

Remember Pac-Man? The iconic 1980s arcade video game in which a yellow dot scurries along twisted corridors, gobbling goodies and enemies along the way? Players persistent enough to finish the game all the way to Level 256 were in for a surprise: When there was nothing left for Pac-Man to gobble up, the screen froze. Game over.

At a remote field site in Sweden near the Arctic Circle, University of Arizona researchers are involved in an interdisciplinary collaboration with labs across the world. The aim: to find out whether natural systems, when pushed too far, produce a similar "game over" response.

Previous studies have discovered that permafrost — soil that used to be frozen year-round — is thawing under the effect of a changing climate.

Similar to food left in a failing freezer, organic matter that previously was locked up in the frozen soil now becomes available to microbes.

In our system, microbes are like Pac-Men. Plants and organic matter in the soil are like the little dots that the Pac-Men go around gobbling up.

But when microbes digest this food, they get gassy and create carbon dioxide and methane as byproducts, both notorious greenhouse gases known to accelerate climate change. Numerous other studies suggest that within the next 100 years, it may be "game over" for the permafrost ecosystem.

Within the larger project team that spans biogeochemistry, microbiology, virology and modeling, I am working with my doctoral student mentor, Moira Hough, focusing on plants. We work with UA researchers Scott Saleska and Virginia Rich.

We are documenting how plant communities change as permafrost collapses, and how that impacts the quantity and quality of organic matter they may be supplying the microbes. Two summers ago, I received a Biomedical Research Abroad Vistas Open!, or BRAVO!, fellowship to spend the summer in the Arctic Circle to collect samples and data in Sweden, which I have since been processing and analyzing.

Hough says we expected that "plant biomass would increase as permafrost thaws and water infiltrates the peatland habitat, because the communities shift to taller, leafier dominant plant species. This is important because the small, woody plants that grow above permafrost tend to be harder for microbes to break down, while those that can live in the thawed sites tend to be bigger, greener and more 'digestible.'"

In other words, as the permafrost thaws, plants are generating more edible biomass for the microbes, accelerating their gas production.

Analyses of the data yielded unexpected results, according to Hough: "We failed to see an increase in biomass across the thaw gradient. In some sites, we even saw a decrease in plant biomass over the growing season."

This finding suggested plants were dying during the growing season, which didn't make much sense to us.

At first we thought it might be a methodological problem. Maybe the two different plots we dug up over time were not as comparable as expected.

However, looking more closely at the trends for specific species led our research team to realize that the trend was almost entirely due to the Sphagnum moss in the intermediate-thaw sites. Since our other data showed that mosses are lower in the intermediate and fully-thawed habitats, which are wet, I wondered if the moss was becoming drowned out over time?

I believed that climate change was happening so quickly at this location that, even within one growing season, my colleagues and I were observing the thaw-associated shift in plant communities, as mosses died off because of thaw-associated waterlogging.

This would be surprising because moss is generally resilient to watery conditions, able to soak up 16 to 24 times its dry weight in water, and shouldn't be dying unless there is extreme oxygen deprivation.

"Both explanations are actually potentially part of larger trends," Hough said. "Permafrost is thawing rapidly under warming conditions, and causing the ground to slump downwards into the water table, and climate change is also projected to bring more rainfall to the Arctic, making 2015's rainy summer potentially a preview of what's to come for the region."

Moss is a significant source of biomass at the intermediate and thawed sites, but may be replaced with taller and larger sedges that are better able to resist wetter conditions. This clear shift and decrease in moss biomass also may significantly impact resident soil microbes.

The change in microbial foods coming from plants, according to the work of other scientists in the project, may be fueling microbiological processes such as methane production.

The project team is working hard to understand how the biomass in the "failing freezer," that is permafrost, and the organic matter produced by the changing plant communities are together changing microbial meals. The team also is trying to understand what gases they produce after their meals, since these gases can accelerate climate change, explains Rich, my advising professor.

In the future, Hough and I plan to run chemical analyses on the biomass samples to see how "digestible" this organic matter is for microorganisms once it enters the soil microbiome. These findings may hold implications for the rate of loss in Earth's permafrost zone over time, which covers about 33 percent of the terrestrial land surface.

I believe that this is important for future generations. In short, it may take less time than we realized for the permafrost areas to hit "game over."

Rose Vining, a researcher in the UA Undergraduate Biology Research Program, performs this research with Department of Ecology and Evolutionary Biology doctoral student Moira Hough, associate professor Scott Saleska of the same department, and Department of Soil, Water and Environmental Science faculty member Virginia Rich. Vining is a senior in environmental science at the UA. She is originally from Flagstaff, Arizona, and graduated from Flagstaff High School.