Modern Streetcars On Track to Begin in 2011

The proposed rail system will connect the UA to Downtown Tucson and help spur development within the city center.
Jeff Harrison
,
University Communications
Oct. 30, 2009
Resources for the Media

(Click to enlarge) Artist rendering of the modern streetcar along University Boulevard. 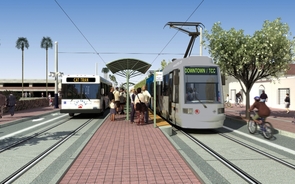 (Click to enlarge) Rending of the modern streetcar alongside a UA CatTran.

The Federal Transit Administration has approved the most recent phase of the Modern Streetcar project, the latest benchmark toward constructing a public rail line that will, when completed, traverse through the University of Arizona campus.

The line also will stitch together the UA with the West University neighborhood, the Fourth Avenue district, Downtown and the Rio Nuevo project.

A 1.1-mile segment of the 3.9-mile modern streetcar system will run from Helen Street and Campbell Avenue through the Warren Avenue underpass and along Second Street to Park Avenue.

University and Tucson officials say the project addresses the need to connect some of the city's major centers, and will benefit students, local residents and visitors without further aggravating traffic.

Ideally, the streetcar system would help spur economic development as well, a long sought goal for the Downtown district, as well as support a growing urban population and job growth.

Although modern streetcars and light-rail trains run on standard gauge tracks, there are significant differences between them. Light rail requires an exclusive right-of-way and typically uses two or more cars linked together. Streetcars have only one car at a time, and operate along with other vehicles in traffic.

Light rail systems also have large passenger platforms spaced further apart than streetcars. Going through the UA campus, the streetcar will use "center stops," long raised platforms in the middle of the street where passengers will board.

Light rail transit also is more expensive, costing about $65 million per mile, as opposed to about $25 million per mile for streetcar lines, according to transportation consultants S.P. Beard and Associates.

With federal approval the streetcar project now moves into the last phase, with final design and construction. The system is scheduled to begin operating in November 2011.

The "Circulation and Transportation" section of the UA's Campus Comprehensive Plan has more information about the project.

The Arizona Board of Regents will vote on an updated edition of the Campus Comprehensive Plan at its December 2009 meeting.