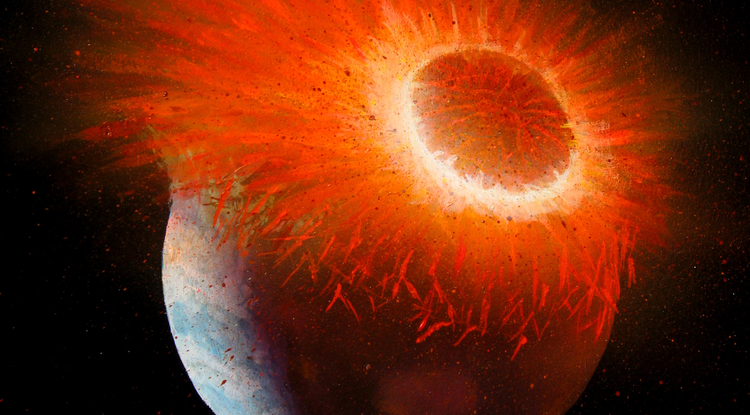 According to a hypothesis developed by UA alumni William Hartmann and Donald Davis, the moon was formed from a debris blown off primordial Earth by a giant impact during Earth's formation. Their 1974 paper introduced what is now the leading theory of lunar origin. (Image: William Hartmann)

Moon Maps, Lunar Origins and Everything Between

A theory for the origin of the moon germinated in the mind of a UA graduate student as he mapped the surface. The theory is still cited today as scientists continue to learn more about our celestial neighbor.
Mikayla Mace
,
University Communications
June 12, 2019
Resources for the Media
Extra Info:

ABOUT THIS SERIES
The University of Arizona played an integral role in NASA’s Apollo missions a half-century ago. Led by Gerard Kuiper, UA scientists and graduate students mapped the moon’s surface with extreme accuracy. The resulting lunar atlases were instrumental in the historic Apollo 11 mission, which landed the first two people on the moon. This series commemorates the 50th anniversary of the Apollo Lunar Module Eagle landing on July 20, 1969.

Related links:
https://uanews.arizona.edu/news/moon
UA Expertise Key in Mapping Moon's Surface
Moon Maps, Lunar Origins and Everything Between
Ion Beams and Atom Smashers: Secrets of Moon Rocks
How the UA Guided Men to the Moon
From Points of Light to Worlds: UA Explores the Solar System
Exploring a Desert Portal to Other Worlds
Mapping the Moon and Worlds Beyond

Left: A page from the Rectified Lunar Atlas, showing the edge of the Mare Orientale impact crater, discovered by William Hartmann during his time as a graduate student at the University of Arizona. (Photo: UA Lunar and Planetary Laboratory) Right: The Orientale basin, as imaged by the Lunar Reconnaissance Orbiter in 2010. (Image: NASA/GSFC/University of Arizona)

The moon’s consistent appearance in the sky each night may lull earthlings into a sense of familiarity, but the moon is actually a puzzling place. It lacks an atmosphere and is bone-dry; it can hardly claim a central iron core; and it has a lightweight crust that is chemically similar to Earth.

The best explanation, so far, for the existence of such a world was proposed by two University of Arizona alumni, William Hartmann and Donald Davis, 45 years ago. The idea was inspired by Hartmann’s work as a graduate student under Gerard Kuiper, who is considered the father of modern-day planetary science and was the founding director of the UA’s Lunar and Planetary Laboratory.

While creating the Rectified Lunar Atlas – one of the first maps of the moon – during the height of the space race, Hartmann identified a giant ringed impact crater on the side of the moon. Identifying this feature, later named Mare Orientale, inspired him to consider the consequences of the largest collisions in the solar system.

In 1974, Hartmann and Davis proposed what became known as the Giant Impact Theory. They theorized that the moon formed when a Mars-sized planet dubbed Theia – the moon’s Titan mother in Greek mythology – struck Gaia, the early Earth, more than 4.5 billion years ago. The collision, they proposed, flung the top layer of the Earth into space, where the debris recombined to form the moon.

The Giant Impact Theory has withstood 45 years of scientific scrutiny and is widely accepted today as the origin of the moon. Yet, as planetary scientists continue to gather data about the moon and perform increasingly powerful computer simulations of planet-forming collisions, the theory’s details have been unraveling, leading to a host of modified scenarios.

The Giant Impact Theory seems to account for the most obvious characteristics of the moon today: No atmosphere, little water and no iron core. Additionally, returned Apollo samples have shown that lunar rocks are chemically indistinguishable from Earth rocks.

On the surface, pun intended, this confirms the 1974 theory. However, computer simulations show that the standard giant impact would create a moon made of the impacting planet Theia, not the Earth, said lunar expert Erik Asphaug, UA professor of planetary sciences.

“Why should the moon match if it’s made out of an entirely different planet?” Asphaug asked.

The question has led to many new ideas about the origin of the moon. For example, after the moon solidified, maybe later material from Earth was ejected and settled on top.

“Ironically, that would mean all the rocks the Apollo astronauts picked up are Earth rocks,” Asphaug said.

But the moon has been bombarded by major impacts which excavate deep and should have thrown those buried Theia-rocks on top.

Simulations also seem to show that the larger the giant impact, the more the moon is made primarily of the impactor. So, another recent study suggests that instead of one Theia, a succession of smaller impactors formed a series of smaller moons, each one more Earth-like in composition, that coalesced into the moon.

Unfortunately, this would imply that all the impactors had to strike from the same direction, which is highly unlikely as impactors hit the Earth from all angles, Asphaug said.

Another potential solution has been dubbed the "Hit and Run."

“If you hit the Earth hard and fast enough, Theia doesn’t stick around,” Asphaug said.

If Theia kept going, the outcome could be a moon formed mostly out of Earth. Or, if Theia was a wayward icy planet, such a hit and run would vaporize Theia, resolving the Earth-rock problem and explaining why Theia is no more.

“But these are both very uncommon, specific events,” Asphaug said. “You get your wildcard once, and that’s it.”

Asphaug and his UA colleague Alexandre Emsenhuber are developing their own moon-origin model, which shows that the moon can be created in a common two-stage giant impact.

They propose that Theia struck the young Earth and slowed as a result of a hit-and-run collision. Theia kept orbiting the sun before impacting the Earth again – maybe a million years later – this time forming the moon in a slow merger quite similar to the standard theory originally proposed by Hartmann and Davis.

“If you’ve had a couple of giant impacts with the Earth already, your compositions will be mixed to begin with,” Asphaug said.

Many of these ideas assume an impactor of different composition than Earth, Hartmann said, but scientists now know that certain meteorites – and their parent bodies – had compositions similar to Earth.

“A giant impactor made of that material would solve many of the lunar origin problems,” he said.

During the space race, the University of Arizona mapped the moon, and the university's alumni and researchers have honed the theory of the moon’s origins. Today, UA researchers are probing deep into the moon to reveal more of its secrets.

To understand the moon’s internal structure, associate professor of planetary sciences Jeff Andrews-Hanna has led multiple investigations using gravitational data gathered by NASA’s Gravity Recovery and Interior Laboratory, or GRAIL, mission. GRAIL data answered some questions, but has also revealed new mysteries about the moon that future studies will need to address. For example, GRAIL data has shown that the moon is lopsided.

Asphaug has proposed that a slow merger of two moons, which he called a “giant splat,” may be responsible for the lopsidedness. The mountainous far side, he said, may be a second moon that collided slowly with the first and formed a cold, thick layer.

“Most of these ideas will be either supported or killed off in the coming second age of lunar exploration,” Asphaug said.

The GRAIL mission has also revealed that the nearside of the moon is crossed by hidden tectonic structures beneath the dark volcanic plains. There are also impact basins and other geological features that are invisible to the naked eye, but shed light on the moon’s volcanic past.

Andrews-Hanna is excited about the data that has been collected on the moon since the Giant Impact Theory was proposed, including topography, gravity, visible images, spectral data, samples, seismic data, thermal data and electromagnetic data.

“The moon is unique in having all these data sets, many of which date back to Apollo and many are a result of our ongoing exploration,” he said. “One frustrating thing about the Apollo missions is that they were all clustered in a small area of the near side of the moon. I wonder if Apollo is representative of the moon as a whole or just the near side?"

He hopes that future missions to the far side of the moon can help answer lingering questions.

“We know so much about the moon, yet so little for a body so close. There are huge fundamental questions to answer,” Andrews-Hanna said. “This is an exciting time for lunar science. Once we learn something about the moon, then we can expand our understanding out to other bodies in our solar system."